What goes around comes around. With Thailand’s population being 95% Buddhist, karma plays a very important role in the religious philosophy the majority practices. But in addition to this, Thai culture is overflowing with a fascinating collection of superstitions, folklore, urban legends, and other myths. One of Thailand’s most remarkable scholars, Phraya Anuman Rajadhon, was the pioneer of studying folkloristics. He made extensive notes on Thai cultural details and heavily examined the stories of village spirits and ghosts mentioned in Thai mythology (Rajadhon, 1968).

Thai folklore is derived from folk religions and stories are often passed over from generation to generation. Rituals play a salient part in Thai folk religions, often with the intent of connecting to the otherworldly. A shaman entails a religious practitioner that interacts with a spirit world through altered states of consciousness, such as trance (Singh, 2018). This is usually done with the intent of directing spiritual energy into the physical world, sometimes for healing purposes. 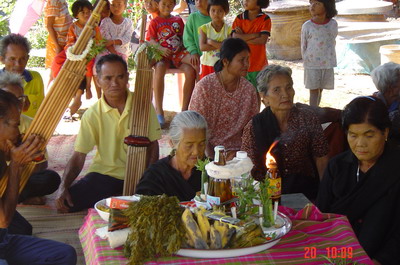 A shaman conducting a healing ritual.

In Thai, the term phram is used to describe a specific village’s shaman, who conducts exorcisms, performs marriages, and other different ceremonies. In addition to this, there is also the mo phi who conducts rituals, specifically burials, and funerals (Rajadhon, 1968). A collection of Thai amulets.

As protection against bad luck, there is the usage of amulets which are very popular in Thailand. It is considered a local form of life insurance if you will (Proebst, 2017). They can be worn either as a necklace, but also come in the form of so-called yantra tattooing or sometimes referred to as Sak Yuant. These sacred geometrical designs are supposed to grant the wearer with supernatural love, health, wealth, and protection (Drouyer, 2013). The protective usage of yantras is also used at i.e. airport entrances.

When Thai people have a Buddha statuette placed on a shelf, they frequently hang a charm next to it for attracting customers. Rajadhon did notice, that some of these charms originated from Thai Chinese culture and have over the course of several centuries, been adopted by Thai people with a few changes (Rajadhon, 1968).

There are several superstitions Thai people use daily. What is noticeable, is that the majority of Thai superstitions regard the themes of death, ghosts, and spirits. A few of them include:

There are several deities in Thai culture, whose sight is supposed to bring good luck and prosperity (Rajadhon, 1968): 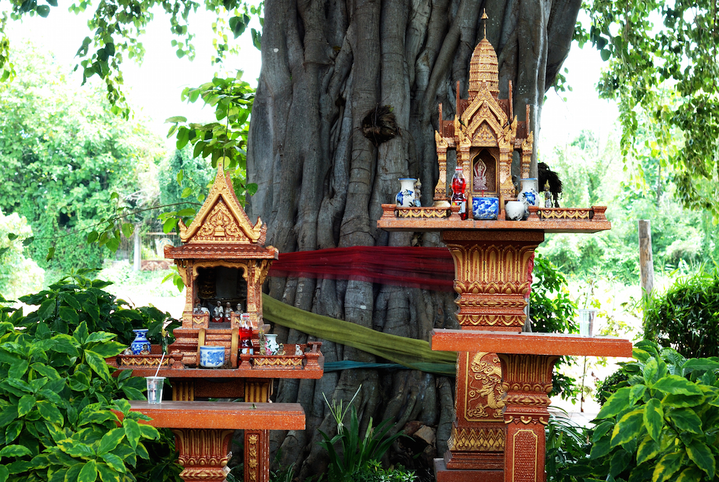 2 spirit houses next to a tree.

Spirits and ghosts are in Thailand known as phi and are primarily found near trees, Buddhist temples with burial grounds, as well as forests. There are spirit houses in Thailand known as san phra phum. These shrines are used to provide shelter for tutelary spirits, meaning a guarding spirit of a particular place or person, and can often be found in urban areas and near trees. It is regarded as bad practice to ignore these shrines and one must make an offering every once in a while to satisfy the spirit that resides there (Rajadhon, 1968).

What is interesting, is that notably cinema, tv shows, and comic books in Thailand have immensely contributed to the widespread popularity of these spirits and legends in Thailand. Some of these films have been so successful, they’ve become classics in Thai cinema. In addition to this, there are countless comic books and animated movies specifically for children that have contributed to this rising popularity (Chiang Mai, 2012).

Along with the many stories and legends Thai culture has, there are several festivals and cultural events that take place, where local folk beliefs are celebrated (Thailand Tourism, 2008):

There are several animals throughout Thai folklore, each having different meanings and symbolism:

All in all, it is quite evident how incredibly diverse Thai folklore is and this is a logical consequence of its historical value. Influences from India and China are also noticeable, and generations within Thailand influence the mythology even more. The role Thai folklore plays in the daily lives of Thai people is quite remarkable and will continue to be that way for many years to come.

Kirdsaeng, P. (2020, October 30). 13 Scary Thai Superstitions Locals Believe In And What They Actually Mean. TheSmartLocal Thailand – Things To Do In Bangkok. https://thesmartlocal.com/thailand/thai-superstitions-explained/