Buddhism first started in Thailand during the Theravada from Asoka’s period, during the third century BC. King Asoka sent monks out of the country, and two monks stayed behind in Thailand to teach people there about Theravada Buddhism. During this period, the first indication of Buddhism was seen in Thailand and became predominant (Thailand Discovery, 2021).

During the Mahayana period, since the introduction of Buddhism in Thailand, it became visible that those beliefs started to spread to other areas of Asia. King Kanitsaka the Great, had the goal to spread Buddha’s teachings. Once Mahayana’s Buddhism reached Thailand, it became widely accepted by the public. This created a large multicultural society, with the different dialects that are still inhabited in the Thai language. The spread of Buddhism beliefs had officially begun in Thailand (Thailand Discovery, 2021).

Finally, the area of Theravada from Sri Lanka established itself into the Thai culture as well. This type of Buddhism that was introduced, is still a part of the present Thai culture. King Ramkhamhaeng had asked senior monks from Sri Lanka to teach their views of Buddhism, and that became the start of Lankavasma in Thailand. In present times, Theravada Buddhism in Thailand is known as Lankavasma (Thailand Discovery, 2021).

The biggest influences on Thai Buddhism are the three pillars that were mentioned before. Another big influence comes from Hinduism, mainly from the period of the Sukhothai Kingdom in Cambodia.  (Asia Highlights, 2021).

Another influence on Thai Buddhism is folk religion. The main purpose of this religion is to attract the favor of the local spirits, and is mostly followed in countryside areas. The observance of Buddhist principles is utilized to please the spirits (Asia Highlights, 2021).

The development of Thai-style Buddhism
Buddhism is the predominant religion of Thailand. Therefore, Thai culture was impacted, cultivated, and shaped by the perspectives of Buddhism in many dimensions (International Buddhist College, p.12).
The Thai constitution has guaranteed freedom of religion, however, the state must support and defend religion, especially Buddhism. Because of the fact that Buddhism has been exciting in Thailand for a long time, Buddhism plays an important role in the culture of Thailand and the way of life of Thai people (International Buddhist College, 2017, p. 2,4).

Sanskrit and Pali are the Buddhist religious languages in Thailand. In

Buddha/ Buddhism in Thailand
Buddhists believe that an external force protects the faithful. In order to strengthen this force, one must follow Buddhist principles, behave well, respect the elders and help others. This is the concept of ‘merit-making’ and has a daily influence on the life of Thai people. The acknowledgment of Buddhist principles is used to please the spirits. The importance of Buddhism in Thailand can be seen in the ubiquitous presence of Buddha images, and in Thai architecture and art (Asia highlights, 2021).

Wat- a group of temples inside a sacred area. It includes a quarter for

monks (vihara), a building for lessons, a temple, and one chedi, or a stupa for housing Buddha images.
In everyday Thailand, a wat is any place for worship, except for synagogues and mosques. There are more than 30,000 Buddhist wats in Thailand, all from different ages and with different styles. Even though all wats are different, the wats do follow the same principle. A Thai wat consists of two parts, the first part consists of the Phutthawat, the area which is dedicated to Buddha. The chedi, the ordinated hall, is called an ubosot or bot. And lastly with a viharn, which is the assembly hall. The second part is the Sangkhawat, which is where the monks live (Asia highlights, 2021).

Besides the Buddhist architecture which is clearly visible in Thailand,

Buddha statues in Thailand are extremely important. During the 7th-11th century, the Dvaravati period, images were influenced by the Indian and Khmer artists. Following the teachings of the Mahayana, many Sri Viajay images were created. Lopburi images have a smiling Buddha with realistic hair and unnaturally long earlobes. Lanna images have crystals and gemstones. They also have lotus-bud-shaped hair curls, with narrow lips and a big chest. Under the Sukhothai period, the style changed a lot. The images started to portray the superhuman traits of the Buddha. Modern images are frequently replicas of the Sukhothai images, the faces are more realistic and clothes are often decorated with flowers (Asia highlights, 2021).

officiants of ceremonies. Many monks start out as temple boys, usually around the age of eight. In this way, they learn the basic education about Buddhism and the scriptures. A lot of men decide to become monks for a vassa. A vassa is an annual retreat that lasts three months. The three months are usually from July till October also called the wet season. Some continue to be monks after their first vassa, and some never return to the secular life at all. Monks are usually specialized in either scholarship or meditation. The ones specialized in scholarship, travel to educational centers to keep studying the scriptures (Asia highlights, 2021).
Before making the decision, the person must have studied and memorized the chants used in the Buddhist rituals. Since the monks do not chant in Thais, but in the ancient language of Pali.
Another factor that monks need to take into account before taking their monastic vows, is the fact that monks are not allowed to deal with matters that are seen as worldly problems. When they are in employment, they are not allowed to handle money and they need to have arranged time off work as well.
Before a man joins a monastery, there is a large and spectacular ceremony that takes place.

Loy Krathong is a festival which date changes every year. It takes

place according to the traditional Thai lunar calendar in the 12th month, on the evening of the full moon.
Of all the festivals in Thailand, Loy Krathong is one of the most meaningful and emotional ones. There are multiple reasons why Thai people celebrate Loy Krathong. The first reason is to thank Khongkha, the river goddess Ganga, and apologize for polluting the waters. Secondly, it is believed you will float away the darker side of yourself. It is believed that all the anger and the bad luck that you have been holding on to, will float away. Every individual puts prayers and wishes on the Krathong and sends it off to float down the rivers and streams. Krathongs are small boats, which are made of folded banana stems and banana leaves, decorated with flowers. In the traditional way, you are supposed to cut off some pieces of your own hair and nails and put them on the Krathong. This represents the bad luck you have attached to you, which is believed will be taken away with the Krathong (aboutthailandliving, 2017).

Yi Peng is also known as the Lantern Festival. The festival is celebrated by thousands of floating lanterns that are released into the night sky. Loy Krathong and Yi Peng are celebrated on the same day. The largest celebration of Yi Peng is held in Chiang Mai, which is the ancient capital of the former Lanna Kingdom. The lanterns that are released into the sky are called khom loi, meaning floating lanterns. Before the lantern is released into the sky, you are supposed to make a wish. You can also write your wish on the lantern, and then release it into the night sky (sonasia-holiday, 2021). 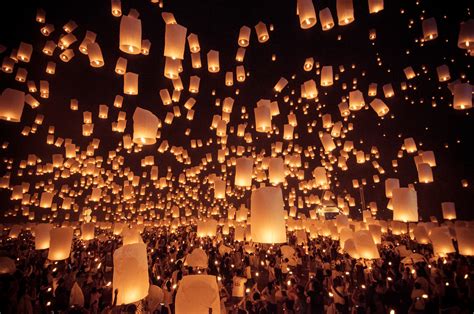 Asian highlights. (2021b, October 19). Everything you need to know about Thai Buddhism. Retrieved October 20, 2021, from https://www.asiahighlights.com/thailand/thai-buddhism