A couple of years ago I came across a Sak Yant for the first time and I was amazed by the beauty and uniqueness of these tattoos. I started educating myself on the history of Sak Yants and the traditions and beliefs that stand behind them. I realised soon, that Sak Yants are not only spread in Thailand but that they have been popular in the western world as well. As I was intrigued by the beauty of this Thai tradition, I want to share the knowledge that I gained over the years.

Sak Yants have been a part of  Thai traditions and  Buddhist beliefs for thousands of years. Traditionally, these tattoos should be given by Buddhist monks or by an ajarn or reusi, which are believed to hold a greater sense of spiritualism. In order to be allowed to practice the tradition of a Sak Yant, a Sak Yant master must study the holy Khom script, which is an old Khmer lettering that is only allowed to use for sacred or magical texts.

Practitioner’s initial reasoning for receiving a Sak Yant usually origin in the belief that Sak Yant’s can enhance one’s future and protect, empower and ensure fortune for its owner. In addition to that, do Sak Yants have  enormous spiritual meaning to the Buddhism community and its owners and thus, these traditions are taken very seriously and the whole procedure of tattooing and receiving a Sak Yant is surrounded by a spiritual vibe. Traditionally, Sak Yants are tattooed with a sharpened bamboo stick with a metal end. Small hits will then preserve the tattoo into the receiver’s skin. After receiving the tattoo, the monk will bless the tattoo with by his weechaa and whispering the specific blessing (May, 2014).

The tattooing with a long bamboo stick, 2019

After getting the tattoo, certain things will have to be taken into consideration in order to keep the sacred meaning of a Sak Yant. General rules after getting a Sak Yant are:

These are basic Buddhist concepts and Sak Yant rules of conduct, given to the student by the Monk or Arjan that gave the Sak Yant. Usually, the Monk or Arjan underlines these rules for the receiver, depending on whether the person is a “Westerner”, Thai or a novice Monk.  If you do not follow these basic rules, the magical meaning of your Sak Yant will fade immediately. There are more rules, which are individually given by the specific monk or arjan that tattooed the Sak Yant (Sak Yant Chiang Mai, 2020).

After receiving the Sak Yant, many experience magical and spiritual vibes, some might even experience a hypnotic state or go into trance. This scenery is also described as some kind of possession by magic. One very popular place to see this is the Sak Yant Way Kru Festival, which takes place at the Wat Bang Phra, a Buddhist temple outside of Bangkok. The festival is visited by over 10,000 people each year and became more and more popular among tourists as well. The festival is used to recharge the magical power of the Sak Yants, respect the teachers of this Buddhist tradition and even to tattoo more Sak Yants. When renewing the magic of the tattoos, many devotees feel overwhelmed by the power and “become their tattoos“ in trance. They tend to run towards a shrine before being stopped by soldiers who get them back to real life by rubbing their ears to stop the trance state (Karsten, 2019).

Sak Yant is describing the kind of tattoo, but there are several different designs that have a specific meaning to it. Usually, the first Sak Yant of a person would be one of the three master Yants:

After receiving the first Sak Yant, participants usually decide to further modify the certain purpose of their individual Sak Yant by getting more that follow a specific direction like health, wealth or happiness.

Nowadays, getting a Sak Yant is more popular around the western world as well. Many celebrities from all over the globe adorned with Sak Yants, making them even more famous than they are already. One of those, probably the most known, is Angelina Jolie. She was tattooed by Ajarn Noo Kanpai, who is now one of the best known Sak Yant masters worldwide (Perras, 2018). Now, people follow what Jolie did 15 years ago. 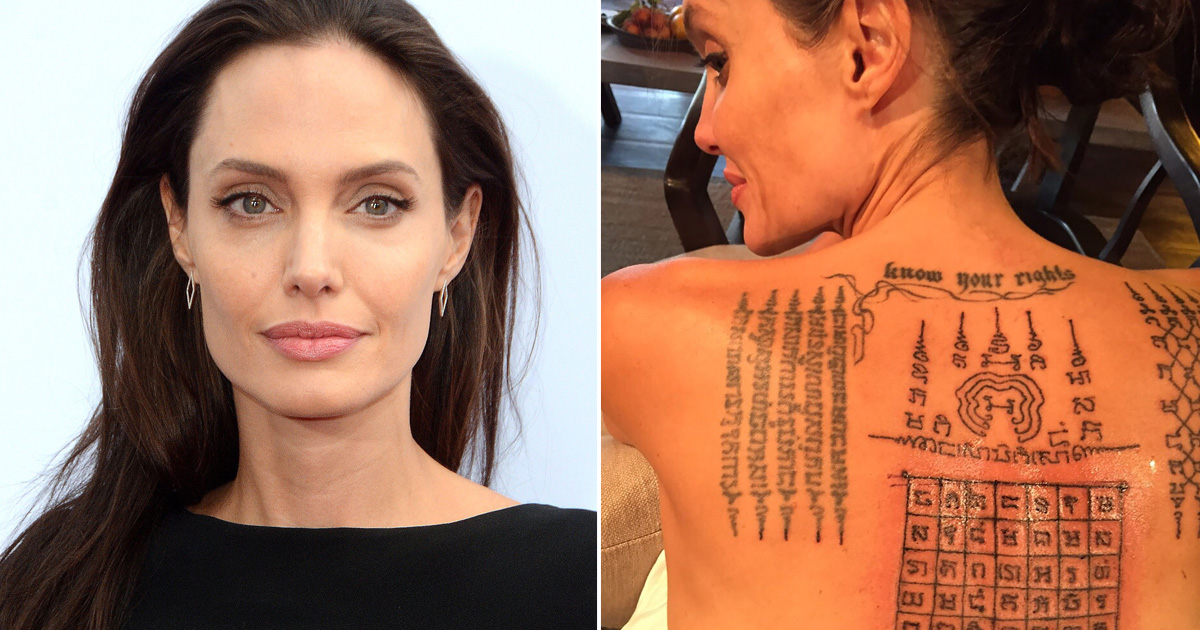 Angelina Jolie and her Sak Yants

Commercial tattoo tourism has been part of Thailands tourism for several years now. Especially well known is the Wat Bang Pra, home to many monks who live and tattoo there, especially western tourists. As stated above, being part of this old tradition, tourists believe that taking part in this Thai tradition is a way to engage with Buddhism (CGTN, 2019).

Speaking from my own experience, when I saw a Sak Yant for the first time, I immediately fell in love with the magical meaning and the unique design of the traditional tattoos. I informed myself, read about the tradition, the meaning and the purpose of the tattoos and thus decided to get one myself. When I decided to do so, I wanted to experience the Sak Yant as traditional, but safe as possible. But not all tourists decide on the safe options and consequently, some report infected tattoos, bad quality and even serious infections like hepatitis.

The problem with the hype

First things first, hype does not mean that traditional receivers or Thai people follow a specific trend here, but with the fact that these sacred tattoos are highly commercialized nowadays. When I travelled to Bangkok in 2019, I witnessed several regular tattoo shops, especially on the popular Khao San Road, offering to tattoo Sak Yants. Without explanation, it should be obvious that this has nothing to do with the actual sacred and magical meaning of a Sak Yant, but more with how tourists want to easily experience the “Thai culture “, without actually taking part in it. In general, these tattoo studios are no sacred place, and the tattoo artists are neither Monks nor Arjans, thus the Sak Yants they tattoo are not sacred or magical at all. Using specific traditions for commercial reasons has been part of the tourism industry for decades, but unfortunately, these practices portray cultures and traditions in the wrong way and that can lead to a huge misunderstanding of cultural aspects of Buddhism and Thai culture and tradition. It leads to tourists thinking that Sak Yants are only tattoos, without any deeper meaning to it, but as explained, that is far from the truth.

Additionally, tourists getting a Sak-Yant in a tattoo shop on the Khao San Road, most probably intoxicated, is not what experiencing this traditional process is about. This behaviour is clearly problematic, inappropriate and disrespectful towards such people that believe in the power of Sak Yants.

As mentioned in the beginning, I came across the Sak Yant tradition a couple of years ago. When I was travelling around the world in 2018 and 2019 I decided to get a sacred tattoo myself, because I fell in love with the meaning behind the tradition. I loved the idea of getting a tattoo that supported me throughout life and guarded me. Consequently, I decided to stop in Bangkok before heading back to Germany. When I was in Thailand, I talked to locals and asked them for guidance on where to get it where it is safe but still traditional and so I came across an Arjan that tattoos Sak Yants at a shrine, which is a sacred and holy place, but not a temple. I contacted the Arjan and got an appointment. At the appointment, the Arjan asked me specific questions about my life and how I imagined my future to be. He explained to me that the Sak Yant always has individual meaning to the owner and he suggested the Gao Yord for me, which is a Sak Yant that supposedly protects me against evil spirits, serious injuries and bad luck i

n general. It also blesses the owner with kindness, loyalty and popularity. The traditional place of the Gao Yord is on the upper back, which is where I got mine tattooed as well. The procedure took around 45 mins and I can say that it hurts way more than a “normal“ tattoo, but after all, it was definitely worth the pain. After finishing the tattoo, the Arjan blessed my Sak Yant in a small ceremony and we spoke some verses together in order to activate the magic of the Gao Yord. After that, the magic was done and I was the owner of my own Sak Yant.

I experienced the whole process as something very special and magical as well, although I have not experienced any trance state or similar. Nevertheless, I really liked the experience and I was planning on getting another Sak Yant in Bangkok during my minor. Although I was sadly unable to come to Bangkok again, the plan did not get cancelled, it only got postponed.