If you know your friends are gay, what will you do? Will you look down on them and avoid them at all cost? Or will you accept them as they are? Right now in Russia, the LGBT rainbow is being trampled on and dye back into grey. But at the same time, it shines brighter and stronger than ever before.

It was supposed to be an ordinary night out, Maskin received a message chat from an “old friend and also gay” suggested them to meet in his apartment. However, When Maskin arrived, he was greeted with 5 men instead of his friend. Afterward, he was strapped with electrical wire to his hand by alligator clipper and followed by the interrogation.

They asked: “Who else did you know?” Maskin said and zapped him with electricity from time to time. “It’s unbearably painful; I was hanging on my last strength” he added. “But I didn’t say anything.”

Homosexual is taboo in Chechnya and most of the Muslim countries in the south of Russia. This society is “highly homophobic” said Ekaterina L. Sokiryanskaya, Russia project director for the International Crisis Group and a Chechnyan authority. She added homosexual is condemned and believed by Islam to be a sin.

After 11 days of interrogating, Maskin was released to his male relative. Before he left, the security officer said to his relatives that if they had any honour, they would kill the young men. His father threatens to beat him, but after Maskin showed the bruises he had. Instead, his father said, “I should kill you”.

This is one of many stories of gay men being tortured in Chechnya back in September being pushed out to the international public. This crackdown is a part of the populist move by the region’s leader, Ramzan A. Kadyrov, to gain more influence in a conservative Muslim region where gay relationships are forbidden.  Although, the event does represent entire Russia on LGBT, on the rainbow struggle to shine behind the mist.

Let’s talk about Russia, a country represents the Romanov’s Golden Era, vodka and homophobia. Although same-sex sexual activities are legal after 1993, most Russians still turn a blind eye for it. At the moment, there is no law to prevent discrimination or to protect gender expression. With the 2014 law adoption which prevented teachers, parents or doctors to help these people, the discontent has risen ever since and threaten many people’s lives.

One of the reasons why Russians can’t tolerate homosexual is because of the influence of the church and the Constitution. With 41% of the Russians population follow, the Christianity Orthodox has a major voice when it comes to this sensitive subject. The church’s leader, Patriarch Kirill condemned same-sex marriage and called it “a dangerous sign to the Apocalypse”. For further support, in Russia’s Constitution, it is clearly said: “marriage in Russia is between a man and a woman”. In the end, all of these contributed to the discontent of the mass-majority of Russian people.

It is weird that the LGBT community in Russia being looked down like that. It’s not like they want to pick a fight against the establishment. Under Putin’s government, that’s when the oppression began to intensify. So, what’s the underline reason for Putin to grind down on these people? Masha Gessen, a journalist and the ringleader of the LGBT activist group Pink Triangle, claims that Putin needs to mobilize the entire country to match his agenda and he needs a lot of enemies. It just happened that the LGBT community is at the forefront of the problem. Consider it like this, the government and the church have created an enclosed environment where if you don’t declare that you’re gay then you’ll be left alone. If you do, on the other hand, it will bring a lot of trouble to yourself and to your loved ones.

Chechnya is only 1 example of LGBT being discriminated and mistreated. There are numerous vigilante groups hunt down LGBT members. They disguise themselves as gay to bait out their “victims” either by direct contact, or social media. After that, they would punish homosexual people with verbal and physical abuse. The worst thing that these vigilante groups did, in my opinion, is to “cure” homosexuality by dosing them with urine. Not only does it not fix anything, but it also puts more social pressure onto these individuals, thus leads to more suicides. Under these kinds of abuses, isn’t it make sense to just leave Russia as a homosexual?

Even though society looks down on them, the hopes and dreams of having a society with freedom of gender expression are still there. In fact, there are LGBT activists and people still struggle and campaign to spread the words of human rights and gender rights. The most famous demonstration for LGBT right, in my opinion, has to be the Pussy Riot. In 2012, five members of the group staged performances in Moscow’s Cathedral of Christ the Savior, raised a powerful voice for human right in Russia. Their actions were condemned by the Orthodox clergy and immediately stopped by the authority, but that couldn’t stop the movements at all. Not only that, Maskin even after all of those dreadful tortures and death threat, he still said: “I don’t want to leave Russia, …I love this country. I was born here. I don’t want to run because of some scoundrel.” The international audiences and organizations also caught along the wind. The Moscow World Cup 2018 is the perfect example of the international fight for gender equality.

It was coincident that the 2018 World Cup also happened at the same time as the PRIDE event. At that time, the government has completely ban homosexual propaganda in the public, but some activists still managed to “smuggle” the PRIDE flag into the stadium in a creative way. Spanish, Dutch, Brazilian, Mexican, Columbian and Argentinean activists had creatively used their national team jersey and turn them into a living flag. This project also involved activists to post themselves represented the flag in famous locations in Moscow, under the name “Hidden Flag”. It had become a sensation for LGBT patrons and communities around the world.  A true rainbow in the mist. 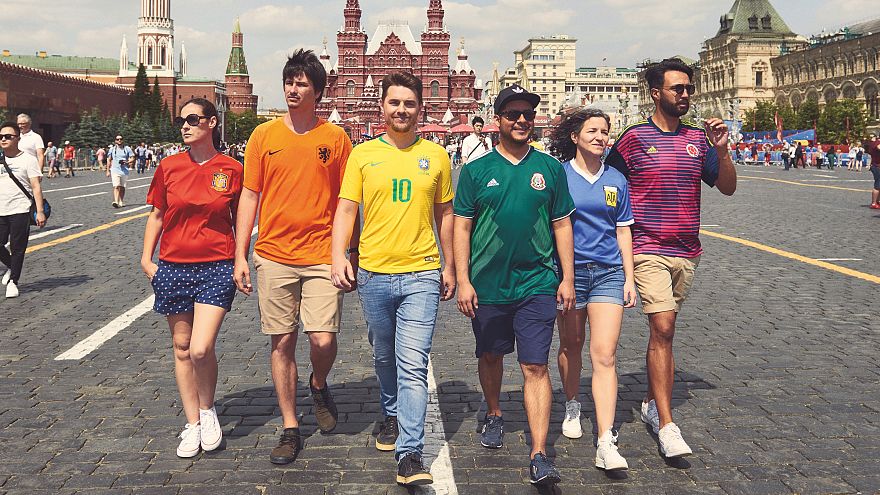 I personally think the LGBT sentiments in Russia will change in the future. If there is one thing that I learned from all of the historical events is that revolutions will always spark from oppressions and hate. Sooner or later, Russians people will understand that homosexual individuals are people as well. The Russian LGBT community is doing the right thing to protect their identity and freedom of expression. One day, similar to the iconic picture of the Soviet army in Berlin 1945, Russian people will embrace the rainbow flag fly over the Kremlin.

If it’s possible please take a look and raise the awareness for the Purple triangle and the Hidden Flag project: