A beautiful picture of a horrible catastrophe – Typhoon Haiyan.

Have you seen the video of a cat that saved the boy from an attack of a dog? 1 Or the video with Morgan Freeman where he talks after inhaling helium? H I L A R IO U S!2

You probably wonder what this is all about as the topics here are usually revolving around politics. Guess what? That I am sitting in my room and watch silly YouTube videos has a lot to do with politics. A few days ago, the Thai army declared martial law and two days later imposed a curfew which is the reason why I am unable to go anywhere and which gives me much time to browse the internet and prepare for my module assignment…and of course, watch cat-videos.

During this module, I am analyzing the Philippines and therefore martial law had already been a rather familiar notion to me. It is the exercise of government and control by military authorities over the civilian population and thus a very extreme and rare measure used to control society during war or periods of civil unrest or chaos. 3

The Philippines experienced a rather long period of martial law from 1972 to 1981 which is described as the darkest time in recent history. The then president Ferdinand Marcos declared it claiming that the country was faced with revolutions from the left and right wing. Nowadays, scholars argue that the Marcos era had and still has a negative impact on the economy and that it was one of the reasons why the Philippines has been widely left out of rapid growth occurring in the Asian region since the 1960s. And not only the economy suffers, also relief efforts after typhoon Haiyan – or locally known as Yolanda – seem to be impaired by the structures he fostered within the government. 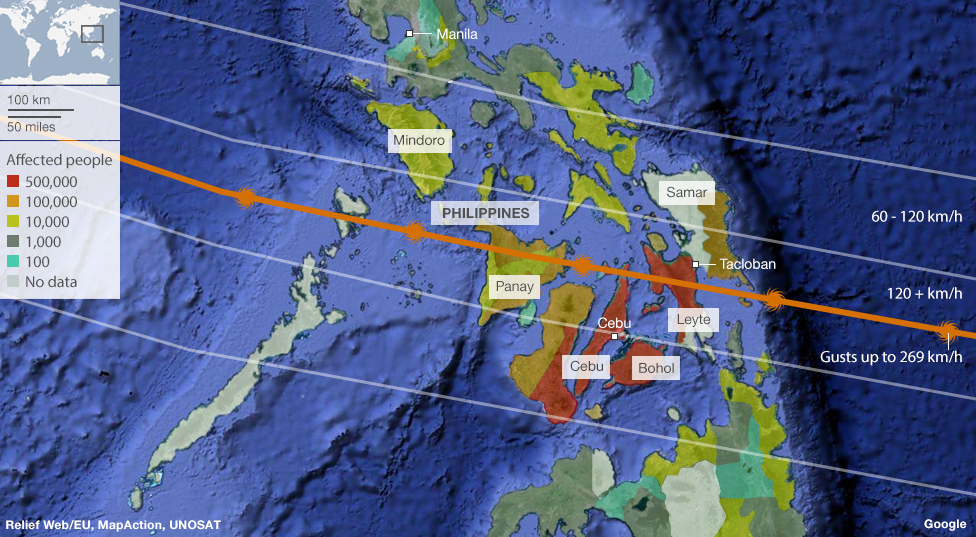 The path of the storm through the Philippines

Marcos, born into a politically active family, was a brilliant mind. His political skills are described as practically unequaled in Philippine history.5 In the presidential elections of 1965, he triumphed over well-liked Macapagal and during his first term, he initiated ambitious public works projects. New roads, bridges, schools, health centers, irrigation facilities, and urban beautification projects improved the quality of life and also provided generous pork barrel benefits for his friends. 6 Other probably necessary reforms, for instance a land reform program, which might have alienated the powerful landowner elite, were never fully implemented.

Although he was elected for a second term, people were not that enthusiastic anymore. Economic growth had slowed down and quality of life deteriorated resulting in an escalating crime rate. Next to that, communists insurgency and violence between Muslims and Christians were on the rise. Rattled by a series of student-led demonstrations and the prospect of the political opposition taking away power from him, Marcos imposed martial law on the whole nation in September 1972. Initially, most Filipinos and the international community welcomed Marcos’ move as it promised ‘law and order’ and to provide the infrastructure and stability needed to attract the foreign investment essential to revive the economy. Under martial law, the military arrested opposition leaders and journalists, mass media was silenced, the Philippine Congress was closed and the Constitution revamped. He appointed himself as secretary of national defense, installed trusted supporters and friends in high positions and expanded the economic opportunities and the role of the military. Marcos centralized state power but did not create an institutionally strong state which would have been able to stand up to him. Business empires were built by associates of Marcos as he dispensed monopoly privileges and power to them.

Thus arose the term “crony capitalism,” referring to associates of Marcos who gained monopolistic control of such key industries…

In the beginning, some occurrences in world politics and economy played into his hands to boost the economy. Due to the US´ interests of having military bases strategically located in the Philippines during the Cold War, Marcos was able to get significant US aid. A general rise in world raw material prices in the early 1970s and new rice technologies was also very helpful. In the latter half of the 1970s, the world economy began to slowdown. Consequential problems were masked with heavy borrowing from transnational commercial banks, multilateral organizations, the United States and other countries. Philippine companies had not yet become globally competitive and the mismanagement of crony enterprises became more visible. 7

It was in this environment in August 1983 that President Marcos’s foremost critic, former Senator Benigno Aquino, the father of the current president, returned from exile and was assassinated. The country was thrown into an economic and political crisis that resulted in the ending of Marcos’s twenty-one-year rule and his flight from the Philippines in 1986. The People Power Revolution was a victory of the people against an authoritarian, repressive regime but by that time monopolization and corruption had severely crippled the economy. 8

The effects of foreign debts can be felt until today. During his kleptocracy, as the government was labeled, foreign debt rose from $ 1 billion to over $ 25 billion. The country will continue paying for all that debt until 2025. Moreover, he is thought to have stolen up to $10bn of much needed Filipino money during his rule. 910 11

During his regime the government had been decentralised and decentralisation was further expanded after his ousting. My dear fellow student Joris explains in his blog how decentrallisation can foster corruption by spreading responsibility towards local, smaller governance instances. Local governments grew particularly powerful in the Philippines and the society developed a lingering distrust of the central administration in Manila and any sign of military involvement that resembles martial law in the regions. Unfortunately, the military is the only organisation in the region with ships, trucks, and people capable of performing complex logistics needed for the typhoon-relief. 12 Another issue is that well-meaning plans drawn up in Manila were and are often ignored, and local corruption also takes its slice of centrally allocated funds. Distrust in the central government and a weak control system, a result of the Marcos era, obstructed vital actions that had to be taken  13

And in the midst of all the chaos a person with a familiar name appears: Bongbong Marcos. He is the son of the former dictator Ferdinand Marcos and Imelda Marcos, the Jackie Kennedy of the Philippines, who became infamous for her spending habits and shoe collection. While her husband held office, she had several government positions and also after his ousting she was elected to the national congress in 1995, and again in 2010. 14  Bongbong,  wants to run as candidate in the 2016 presidential elections. Significant in Philippines politics is that there are a few established dynasties which control certain provinces and also the political stage. There exist rivalries between these dynasties, especially between the one of Marcos and Aquino as Ferdinand Marcos is believed to be behind the assassination of the current president´s father. Public opinion about his father has changed lately and many people express that he was the best president the Philippines ever had. Another significant Filipino characteristic, the bandwagon mentality, might help him as well. Filipinos tend to vote for the candidate that is coming from a big name or family. 15

I hate to say this & I guess a lot would disagree about this but seeing the accomplishments done by Ferdinand Marcos. He is the best for me 16

Past experiences show that politicians are judged on how well they perform in extreme situations. Is the performance perceived well by the public it can promote their career, is it perceived badly it will destroy it. President Aquino, whose mother was the president after Marcos, faces a difficult task in this situation and if he does not manage to satisfy the Filipinos, the next president might be another member of the Marcos family.

I am not saying that Bongbong Marcos would be the next dictator, but it would not be a good signal to the international community that just gained some trust and invests in the Philippines to have the son of a former dictator as head of the government. Having a look at the situation in Thailand now shows that reactions are quick on changes in political situations. Most foreign governments opposed martial law and withdrew aid and foreign direct investments. Maybe they learnt their lesson from the martial law era in the Philippines to not foster these kinds of regimes.

Those who cannot remember the past are condemned to repeat it. 17

The Philippines is the world´s most storm-exposed country in the world. On average, 8 or 9 tropical storms make landfall each year, with another 10 entering its waters. 18 Therefore, the country needs a sustainable plan for rebuilding to avoid future disasters, Some regions implement already new strategies. Part of those strategies involves an embargo on building near the seafront. It is planned to resettle people living in designated no-build zones.19

Next to being a horrible humanitarian catastrophe, Haiyan will cost a lot of money which could have been used to boost the economy. In my opinion, it is essential that certain political parties do not take advantage of the current situation and obstruct the implementation of, for instance no-build zones. I can understand that it must be hard for families to give up their homes and start somewhere else, but this has not been the last typhoon and by feeding resentment against these plans, it might be possible to gain votes on the expense of lives in future catastrophes. For the sake of the future of the whole Philippines, a centralized disaster management has to be implemented and also a coordinated central plan on how to rebuild the Philippines. To make the public accept this and to quieten their fear, clear rules and scopes of these plans need to be set up and communicated. Another viewpoint I want to stress out is civil participation in politics and governmental matters. More people must actively meddle in Philippines politics to break the cycle of having only a few dynasties representing them and keeping up weak governance.

When  decent people stay out of politics, they shouldn’t be surprised when politics become indecent. [Friedrich Naumann, German liberal politician]

To come back to cat videos and Morgan Freeman on helium, that these videos were shared, liked and watched more often than any other news, is an expression of pop culture and shows what people are actually interested in. Many people are dissatisfied with their governments or other organisations but gave up and complain without changing something. That people have the power to change unfavourable situations has examples all over the world and a very strong one happened in the Philippines. If everyone would divert his attention away from these things to something that really matters, much could be achieved.