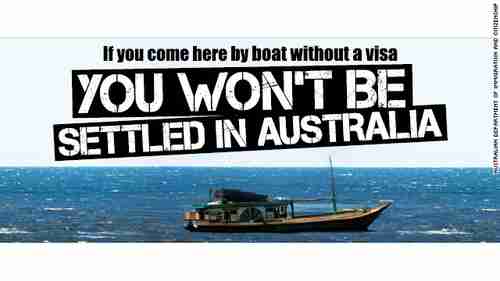 Official campaign of the Australian Government which aired in different countries in different languages to warn people not to come to Australia. 1

The Prime Minister of Australia, Tony Abbott, has postponed a trip to Indonesia which was scheduled for the beginning of May. The reason behind the decision might be that Abbott tried to dodge an awkward situation in case a boatload of asylum seekers, sent back by the Australian Navy, could land in Indonesia during the visit. This incident would not have been left uncommented by the press and officials in Indonesia.

According to the Indonesian Ministry for Legal, Political and Security Affairs, the Australian Navy had intercepted two boats close to the coast of Australia, combined the two groups, added three more passengers and put them back on the boat of the larger group. The asylum seekers said they had been escorted closer to Indonesia and then been left on the ocean. 2

The diplomatic relationship between Australia and Indonesia is already tense after last year’s allegations that Australian agencies had spied on the Indonesian president and his wife. Now, Australia’s policy of asylum boat turnbacks causes more tensions. This was not the first incident and many groups see this as a serious development in Australian politics. 3

I lived in Australia last year and followed the elections carefully as the discussed topics were rather disturbing for me. Asylum-seekers had become a top issue in the lead-up to Australia’s federal election in September and the term “boat-people” proved to be a very popular topic in opinion polls. The ruling Labor Party, probably in the hope of gaining more votes, implemented tough new policies, e. g. asylum-seekers arriving in Australian territory by boat would be flown to Papua-New-Guinea for processing and resettlement. This deal was made in return for additional foreign aid. A similar agreement with Nauru, a Pacific island with a population of 10,000, was also reached. These deals were highly criticised as a human rights violation by the UN, 4 but the announcement had improved the Labor Party’s figures from 17 percent to 25 percent in opinion polls. 5

…everyday, we’re being flooded by boat people who are cheating the system. I hope they are all drowning …6

When looking at the statistics, it is easy to see that Australia is far from being flooded. UNHCR ranked Australia 49th for hosting refugees with 30,083 refugees and it received only 1.47% of the global share of new asylum seekers (29,610 applications).7

Refugees arrive in Australia by two paths: either by plane or by boat. Those who come by plane must have travel documents from their country of origin and a visa to enter Australia. The ones coming by boat suffer several disadvantages. First, they come from countries that make it difficult or impossible for them to get travel documents. Second, they come from countries where it is practically impossible for them to get a visa to enter Australia. They come to Australia by boat because they can’t come by plane. I was really interested why Australians seemed so resentful towards refugees arriving by boat, which they called boatpeople, queue jumper, or illegals. Where does this ignorance come from and why does there seem to be so little compassion for them? The answer might lie in the way how opinions were shaped by politicians and the media.

A common theme in Australia´s immigration policy since it became a Federation in 1901, is the presence of need for control.

We decide who comes to this country and the circumstances in which they come. 8

The White Australia Policy (1901 – 1973) excluded non-Europeans from entering and racist remarks were openly made, especially towards Asian immigrants.

Two Wongs do not make a White. 9

No one wants to see the yellow hordes pouring into the country… [9. J.E. Lake, President of the Australian Eurasian Association, 1970]

Nowadays it is considered politically incorrect to mention race but politicians seem to have found new ways of playing the race card without actually mentioning race. The Howard Government (1996 – 2007) created a culture of fear against muslims, who would invade Australia by boat, to reach and sustain their political goals. The tragic events of 9/11 and the London bombings of 2005 helped to reinforce the security-argument. 10

Another claim with which they encouraged racism towards Muslims and Arabs without being explicit was that refugees had threatened to throw their children into the sea if a nearby Australian vessel didn´t pick them up. Pictures, taken by the Australian Navy were intentionally misinterpreted and portrayed to the public in order to confirm that “these are the type of people we do not want…”, leaving Australians to draw their own conclusions about the ‘type’ he was referring to. In reality, the people on the boat were signalling for help as their boat was sinking – many Australians still do not know this. 11 This woman lost her son when their ship sank. An average of three people die per week on their journey by boat. 12

Spreading wrong facts has also contributed to the perception that Australia is saturated with refugees. John Howard said in an interview in 2001 “We continue to be ready to take genuine refugees, we take more on a capita basis than any other country except Canada.” Australia is only placed 49 of countries hosting refugees 13, but no one seemed to have checked the facts as the wrong statement is repeated by citizens and in the media over and over. The statement also implicates that most of them are not genuine refugees, but actually 90 % of them are regarded as such. 14

A subtle change in the usage of language can also change perception. “Doublespeak” is a method of distorting reality by making the unpleasant look good. 16 The Australian government uses it and if readers are not skeptical it can be misleading. Locking up “illegals” in detention centres without trial seems justified, locking up innocent, traumatised human beings is not. “Jumping the queue” is such a highly used term, which suggests that there would be a queue and someone should be standing there instead of jumping it. In reality, there are no Australian representations where people could queue up in countries where most of the boatpeople come from, for instance Afghanistan. And honestly, if your life would be in immediate danger, would you queue up or try to get out of that situation as soon as possible?

Australians are supportive of refugees but what we don’t appreciate are the
“queue jumpers” who with a lot of money, buy and bribe their way to
Australia and unfairly displacing legitimate refugees who have gone through
the proper processes. 17

Illegal boats, illegal immigrants, or simply illegals: this terminology is used regularly to create a sense of panic or fear about people who arrive without a visa.

Despite a long history of migration to Australia by boat, the term “boat people” was first mentioned in the media with the arrival of four Vietnamese asylum seekers in 1970. The term underwent a development of being a neutral description to being perceived in a very negative way. By repeating phrases and words that incite a negative association like “invade”, “flood”, and “assault” whenever you refer to “boatpeople”, “queue jumpers”, or “illegals”, it is possible to create repulsion in readers´(and listeners´) minds over time. Furthermore, the frequent and deliberate identification of refugees as a problem has become regarded as ‘common sense’, no longer contested by the general public. 18

While politicians discuss the boatpeople-problem, economists have calculated what the whole “Operation Sovereign Border” would cost and concluded that the taxpayer pays more for controlling borders and detaining boats from reaching Australia than for accomodating incoming boatpeople. Depending on the calculations, up to 4.5 billion Australian Dollar could be saved.  19 20 Where do boatpeople come from?

When it comes to boatpeople, Australians go on “irrational-mode” without realizing it. I had several discussions with my flatmate and her friends which left me dumbfounded as I brought facts, figures, and examples but could not persuade them otherwise. It is true that the amount of boats arriving Australia has increased, but so has the intake of refugees of other countries and Australia´s share is still very low compared to them.

Maybe Europeans are on the one hand more sensitized to be more critical with the media because the former mentioned strategies were all used by the Hitler-regime and on the other hand most European countries are more community-based societies compared to the highly individualistic and masculine society in Australia, in which people are more self-centered and less compassionate. 21 22 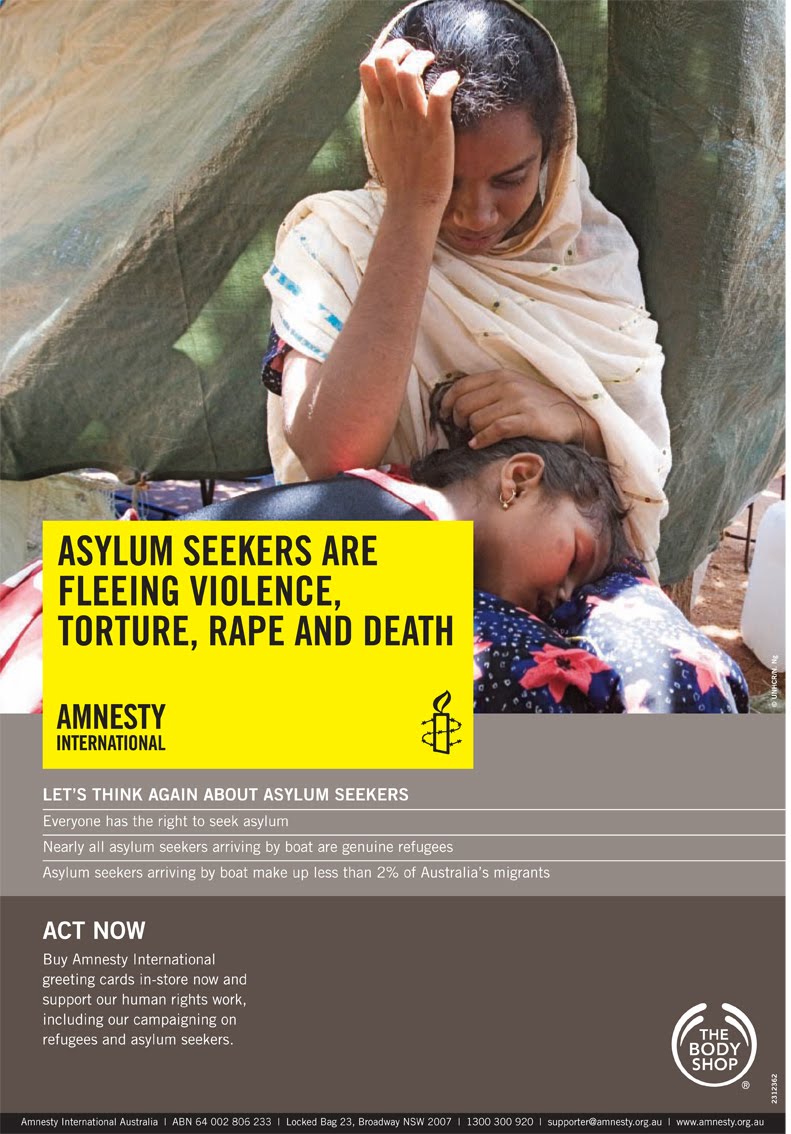 For their own good, they have to change this misperception. Enlightenment is therefore very important. Many non-governmental organisations and social responsible companies are trying to change this wrong perception with educational campaigns. It is not only a moral suasion; the cruel  and de-humanizing treatment of refugees puts Australia in a very bad position and damages its reputation internationally. The UN and not only neighbouring countries are enraged and diplomatic tensions arose. Next to that, the campaigns and the efforts of the Navy and other bodies to secure the borders costs a lot of money.

What got stuck in my mind were the stories of holocaust survivors coming to our schools and telling about their life when I was little. It would be a good idea to invite boatpeople to schools as kids would see that these are people who went on a dangerous journey for a reason and might be encouraged to challenge the current view of them. Reaching Australians might be also very easy via sports as this is the aorta of the country´s identity. Displaying facts about boatpeople before, while, and after matches or sports people telling their personal story might give them food for thought and slowly change their views.

To leave the taken path would not be easy for politicians as they walk it already for so long. The main step would be that they should be honest and confess that and how they planted misperceptions into the minds of their citizens. Another very important change should be made by the media. It should act more as a watchdog and report information to the public so they can make informed decisions and keep the government from taking too much power from the people and overstepping their bounds.

Wake up, Australia! Remember that most of your ancestors have been boat people as well, some of them also fleeing their countries, and your anthem includes the line “We´ve boundless plains to share” Refugees are brave people who can evolve to the most valuable citizens as they will be highly grateful towards you. 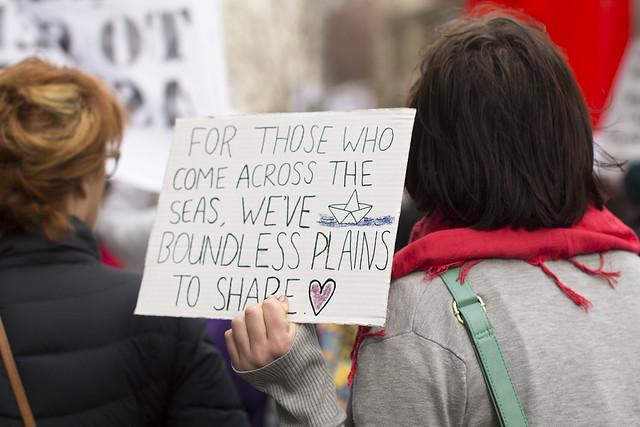