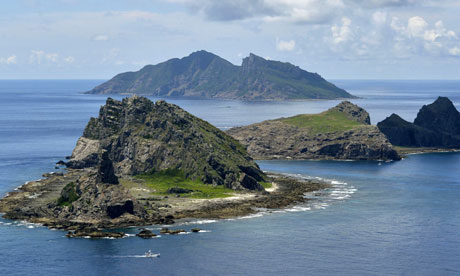 The Senkaku Islands or Diaoyu Islands are a group of rocks and small uninhabited islands with a total span of around 7 square kilometers. Although the group could go through as a movie set from one of the pirates of the Caribbean movies it is source of great dispute between two of the most powerful nations in the world today.

China and Japan do not agree to whom the islands belong to. According to Japan they annexed the islands on 14 January 1895 as part of the Nansei Shoto Islands. After World War 2 Japan renounced the island group under the treaty of San Francisco. They were however returned to Japan in 1971 under the Okinawa reversion deal. When it became clear that there might be oil reserves located near the islands, China and Taiwan started to claim the island group to be theirs.

According to Chinese claims the island group belongs to them. They base their ownership on the history it has in relation to the islands group. According to China their fishing ships fish around the islands for a long time already which makes them believe it is part of China. Unfortunately this does not count for anything, because Japan has valid documentation showing the islands belong to Japan and as a result its resources.

The tensions in the region are mounting with Japan currently holding the islands while China and Taiwan both try to acquire part of the region. With small incidents in both the sea and the air the two nations try to drive each other out of the region. The 2010 incident needs to be highlighted in this case where a Chinese fishing craft collided with two Japanese military vessels. As a result of the collision the captain and crew were arrested which infuriated some of the Chinese populace. Anti-Japanese protests started in all major cities of China. China’s reply to the incident was to arrest some major Japanese car component manufacturers in the north of China as well as calling back its tourists. 1

The United States also plays a small role in this scenario namely that it has a security alliance with Japan promising to protect Japan in times of war in exchange for military bases on the islands of Japan. However the U.S. does not want to intervene in this conflict simply because it has no reason to weaken the ties it has with China.

The questions arising with this pressing matter are varying. First of all history shows us that both China and Taiwan started getting interested in the seventies after it was discovered that there might be possibilities of undersea oil reserves near the small island group. This indicates that the primary goal is to increase the national resources of both China and Taiwan. Secondly, China says that the islands belong to them based on their history and the idea that they have been fishing these waters for decades already. However now valid indication can be shown which actually proves that the islands do belong to China. Perhaps the most valid reason for the islands not belonging to China is that in the 1951 Treaty of San Francisco in which Japan had to renounce the island group China made no effort what so ever to acquire the group under trusteeship. Instead the island group was appointed to the U.S. which returned them to Japan in 1971. 2

The location of the Senkaku Islands.

Although the dispute is a long way from being settled, the international community needs to start waking up as well. It has been seen many times in history that when a nation starts to acquire more land for itself it gets greedy and starts threatening other nation’s sovereignty. This could lead to major conflicts which could involve a much greater part of the world. The invasion of Poland by Germany in the fall of 1939 shows that when other countries fail to act it can have devastating consequences and although Germany had a different reasons for expanding its territory than China it is equally dangerous in the sense that it paved the way for the occupation of other countries as well. In my opinion Japan has a more legitimate belonging to the islands and as a consequence the natural reserves surrounding it. Whilst China is currently only provoking Japan it should be dealt with in order to prevent another great war from happening all over again.