The Thai cuisine is something special on its own already, not only in the restaurants but also in the kitchens of the Thai population. The Thai street food is the cream of the crop in comparison to the street food in other metropolis across the globe. In other cities the street-food is sometimes mistrusted or not regarded as a proper meal to have and therefore mostly ignored or passed by by tourists as well as by locals. In Bangkok things are different, way different, in fact there are food stalls that are serving food that is so good that the owners have been awarded with a Michelin star for their high quality food. This might seem like the highest possible reward for the jobs of the stall owners, this is however not always perceived like this by the stall owners. In the following blog there will be dug deeper into the reality of this. 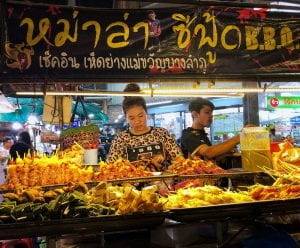 The beginning of Michelin in the streets

The Michelin star street food started in 2017 when Raan Jay Fai received a Michelin star for her outstanding food, which instantly gave her a lot of fame and a lot more customers. A Michelin star is the ultimate hallmark of culinary excellence, only the best chefs/cooks etc. are rewarded with one of such. This reward is provided by The Michelin Guide, which is an annually posted magazine with the best culinary highlights in the world (FineDingingLovers, n.d.). After Raan Jay Fai’s Michelin star, few other stalls have been rewarded with a Michelin star as a reward for their outstanding food quality. To name a few of these great chefs: Chakki, Ann uay Tiew Kua Gai and Thip Samai are several stall owners in Bangkok that earned a Michelin star for their food over 2018, following the success and fame of Raan Jay Fai.  All these street food stalls are located throughout the center of Bangkok. However, some of the list of Michelin stalls can be found close together, in one of the huge food markets that Bangkok has like lung Bang Rak and khlong Toey. 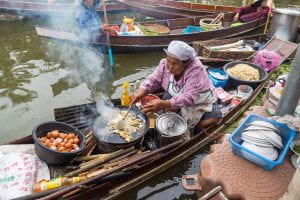 Receiving a Michelin star, in case of restaurants, is perceived as one of the biggest honors that a restaurant can possibly get. It can be seen as a reward on the hard work of the owner, everything the owner has put into it or the amazing growth of the restaurant for example. The icing on the cake, if you will. This is the response that is mostly given by restaurants, the response of some street food stalls on a Michelin star is a little different, less enthusiastic. This is especially the case with Raan Jay Fai (73), as an old women she is not very happy with the massive number of customers she now has on the daily. She even had to create a reservation system for her food, in which the waiting lines grow up until the point of a two month wait. However, Raan Jay Fai still works as cool as a cucumber in front of her customers. 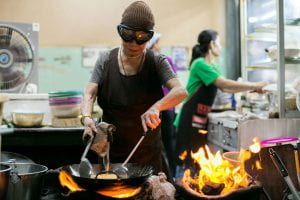 Considering that the quality of her food has not decreased since the receival of the Michelin star, even though Raan Jay Fai is unhappy about this massive number of guests.The reviews provided online are nothing but positive, in relation to the quality of the food, the only negative aspect would be the huge waiting time before receiving the meal. Because the Michelin star creates a massive workload for Raan Jay Fai, she even stated that she would like to get rid of the star if she could. Just to go back to the less busy times and be working at a regular pace, for a regular number of guests, at regular working hours. 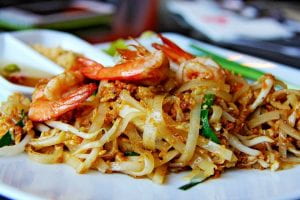 As may be clear, the Thai cuisine is something special and has some stunning dishes. There is a wide variety of  dishes presented on the streets, also by the Michelin street stalls that were mentioned earlier. Therefore, it might be nice to know what to order before going to such places, and get an image of which dishes are the ones that can add to the Thai experience best. Firstly, Sam Tam is one of the most popular dishes when it comes to Thai street food. Som Tam Thai usually is basically a papaya salad which can be enriched with other ingredients. The second popular dish is what tourists go nuts for; Pad Thai. Which is, as stated by the Thai population, not really an authentic Thai dish, but it was created for the tourists, less spicy than the usual Thai kitchen. It is known as the most flavorful noodle dish, which is usually prepared with bean sprouts, onion, fried egg, sugar and fish sauce. There are lots of takes on Pad Thai, where the most popular one on the streets is with shrimp. The third dish on the list is Thai Roti, which is some sort of fried bread or pancake in different takes as well, for example with banana or with ham and cheese for example. 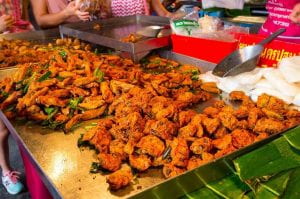 Another very popular Thai street food is fish cake, where the saying ‘’everything is better deep-fried’’ really works. The fish cake is more like a snack than an actual dish, but with chili sauce it is really worth the wait. A small tip would be to take it with something to fade away the spiciness of the dish, like cucumber for example. The fifth Thai street food dish is Khao Niew Ma Muang, which does not really have a translation. However, it is mango served with sticky rice and is a delicious Thai desert. It is usually served as a freshly cut mango, with sticky rice on the side and some coconut milk and dried yellow Moong beans on top for a little crunch. Both of these are not really full meals , as mentioned, but are usually eaten on the side or after a nice meal of Pad Thai or Thai Roti for example.

Both sides of Michelin street food 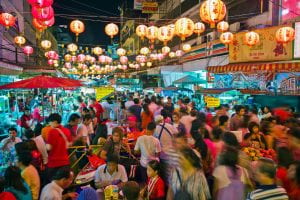 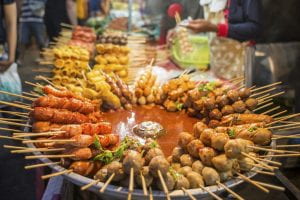 To put it in a nutshell

The stunning Thai cuisine is present in all parts of the city, not only in restaurants and homes but also on the streets. The outstanding food has in some cases been awarded with a Michelin star which for restaurants is considered the highest possible honor. In the Thai street food stalls there is a high variety of dishes that one can order, but the most popular dishes among tourists are Pad Thai and Fish Cakes. 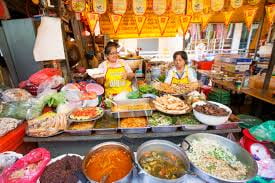 The Michelin stars have brought a lot of fame with it for the street food stalls, and therefore way more customers than before. However, in the case of Raan Jay Fai this Michelin star is more a negative thing than a positive thing. The reason of this is as easy as pie she is a women of 73 years old, Raan Jay Fai can hardly keep up with the high number of customers and is therefore pleading to give back the star to Michelin. Therefore, there can be said that the Michelin star has a positive and a negative side. Fame and high customer numbers and therefore income on the one hand. On the other hand is the high number of customers as well, which brings a high work load with it, which can be overwhelming for the stall owners.