When one thinks about dream destinations or potential locations for exotic and beautiful scenery Thailand is a country that comes to most people’s minds. Having some of the most gorgeous beaches in the world, filled in with some of the deepest and densest forests, wild and vibrant nightlife with some of the most delicious cuisine in the world. With all these attractions it is not hard to see that Thailand has some of the highest levels of tourist travel in southeast Asia at 40 million people predicted to travel through Thailand in 2020 (“Thailand Tourism Statistics” n.d.), which contributes 70 million USD to the nation’s economy every year (Associated Press, 2017). These travellers, adventurers and life enthusiasts are trying to get the most out of life and this beautiful destination enchanted by the chaotic yet tranquil life in Thailand. 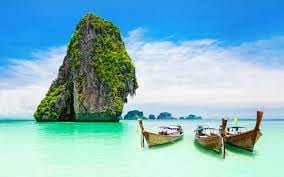 However, as in many fairytales, there is an evil side opposing that of the light. As a majority of tourists leave Thailand with amazing experiences and adventures to share, some of these stories become rather dark in nature and even at some points dangerous to the audience themselves, which can all be evaluated as some of the most dangerous situations, one can find themselves while staying in Thailand or supporting activities that may endanger others. 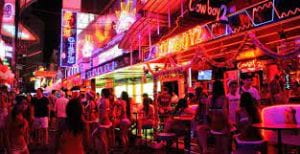 It isn’t a mystery to anyone that Thailand has a lot of attractions related to the sex tourism industry. Unlike Amsterdam which has the most famous red-light district in Europe, Thailand has multiple – some of the most frequented being Bangla Road, Soi Cowboy and The Walking Street in Pattaya. There is a lot of glamour behind the red-light district however there is a dark side to it as well. The majority of the workers there are considered to be migrants or from other countries, besides Thailand, as Thailand has approximately 2.06 million people working as migrant workers and these numbers are predicted to rise in later years (Statista, 2021). These workers are sometimes victims of human trafficking and are utilized by the mafias of Thailand as a major income as there are usually people from less developed countries trying to make it in the big world. The UN agency for cooperating against trafficking in persons states that sex tourism continues to be a large factor in limiting the efforts of anti-traffickers and police personnel. The tourist involvement in the red-light district funds and motivates traffickers and mafia members to continue the supply and funding in the area of prostitutes, drugs, and other illegal substances. 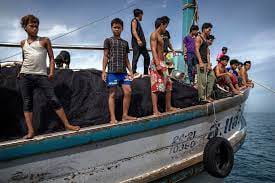 However, human trafficking is not limited to the sex industry. There will be multiple instances where people looking for employment would be taken into fisheries or fishing boats and given jobs. This boat will take the people out into the sea and would create poor conditions for the workers to the point of slavery to ensure that catches are made if not the crew would be beaten or even worse – “lost at sea”. These boats sometimes travel to different countries and supply the people to other fisheries to work as “crew” till old age disappears off the face of the earth (Urbina, 2015).

As a recommendation tourists should research where they’re going and where their “fun” is sourced from. This will greatly aid the antitrafficking forces as traffickers will have a lower amount of funding due to the fact that there is simply not enough demand for their product

Animal parks and zoos have been long a part of human entertainment and a way to educate ourselves on how animals live look and exist. Thailand is no stranger to these animal parks as they have 155 national parks. Some of these reserves and protected areas are associated with temples. one of these temples which were famous for tiger preservation in the western Kanchanaburi province, was found to be selling the animals pelts on black markets earning an average estimate of 15,000 U.S. dollars per day with said animal products. Tourists flocked to the given area beforehand and funded it even more as tigers were considered domesticated or docile however there was an even bigger money-making scheme running in the background as the monks would sell the animal pelts to Chinese markets creating great grievances within the community (Hucal & Ambrose, 2015). 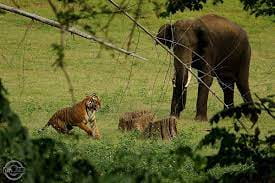 Elephants and Tigers roaming free in a reserve

Another area that is questionable in the Thailand animal tourism industry is the ethically questionable elephant ride and elephant activity tourism. The elephant is often considered a symbol of royalty in Thailand where also it is considered to be a symbol of good luck (Zitting, 2017). The elephants which are sometimes smuggled illegally into the country are put into brutal training exercises and abuse to make the elephants obedient to their masters and are kept chained in order to break their spirits. This is to comply with their masters wants in order to make revenue from ignorant tourists. Elephant rides have been long considered unethical and unhealthy to the animals as they required a lot of training and the general change in the animal’s behaviour for it to become safe enough for tourists to use as a method of entertainment and experience (World Nomads, 2018).

Doing your research on matters such as this is key to finding the most ethical activities that support the local community to the highest degree without infringing on animal treatment or supporting organizations that have been funded solely by the suffering of animals and the misinformation of tourists and other parties.

If you’ve seen the Netflix series The Serpent you would know the story about a man running a business in Thailand where it’s focused on the exploitation and manipulation of unwitting tourists which led to the murders of many unsuspecting tourists and the kidnapping of several others, you would know that even though Thailand is beautiful and has many gorgeous sights there are some areas that are with more of a backstory than others as this man did so in Bangkok (Bentley, 2021). 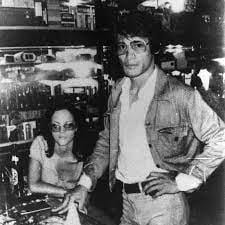 “The Serpent” Charles Sobhraj and Marie-Andrée Leclerc in Bangkok

One place that as a tourist in Thailand you may hear is about Koh Tao. This island is one with beautiful beaches and small hotels set to be affordable to the masses, with a plethora of many bungalows another budget-friendly villa surrounded by sandy beaches and aquamarine water it is really the place to be if relaxation and comfort is what you’re looking for in Thailand. however, there’s a dark side to this place as well. There have been several “unfortunate events” regarding this area as there have been a few deaths and disappearances in the area. In 2014 there were two bodies found washed up on the beach, in 2017 a Belgian backpacker was found dead in the jungles, every now and then there are tourists that go missing in this area however business goes as usual without much interference from the outside world. There have been some allegations of murder in the area, but the police are very dismissive of it. However, it is also important to realize that Koh Toa also plays a significant role in the combination of retail in drugs alcohol large bodies of water combined with the tropical heat we which really does not call for safety. however, with all of that the island still remains beautiful an amazing place to visit if one is in Thailand.

As a final of this blog archetype, I can definitely say that one should definitely visit Thailand and experiences culture, But one must also need to be smart about where they go and what they invest their money in Thailand is a gorgeous and borderline Wonderland of a country that has been thrown into the great capitalistic machine of tourism making it difficult for some people to break out from the pack and encountering something truly unique and for themselves. The locals are very willing to share their culture and amazing lifestyle with you all it takes is to ask. be free be wild and take a risk in life but not too much. 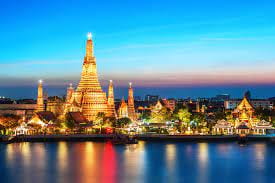 As a perspective point the rates of violence and crime and the use of overall hard drugs in Thailand are far lower than those found in the US but the only issue of a slightly higher moderate but what’s life without a little risk ;), And when is there a place that is truly 100% safe do a little research have some St smarts and generally you’ll have a good time in Thailand one which will never be forgotten.