IR MP1 2022-23
From coup to crisis? Thailand is well-known for the multiple military coups that happened...

After the recent attack on a childcare centre in Nong Bua Lam Phu province in Thailand where 37 people have been killed including 24 preschool kids, the gun control legislation in Thailand has been once again brought to everyone’s attention. This has brought up some serious thought about the current firearms legislation in Thailand and the effects that this has had since the regulation has been implemented. Let’s first start with the history of this legislation and afterward look at the consequences this has had on the Thai community. 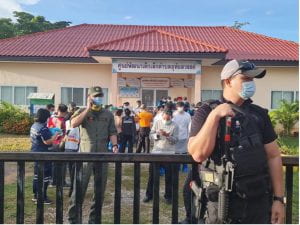 History of the Legislation

Since the legislation of guns has been passaged in 1752 during the Ayutthaya period, gun ownership for personal and property protection has been allowed. In 1947, this gun ownership legislation had been further regulated to the Firearm, Ammunition, Explosives, Fireworks and the Equivalent of Firearms Act of 1947. Since this enactment, the Act has been amended nine times. World Population Review states that Thailand has more than 10.3 million firearms and the individual gun ownership rate is 15.10 per 100 persons. This makes Thailand the country with the highest gun ownership in ASEAN and the second highest in Asia after Pakistan. Besides this, Thailand has 1,052,815 military and 230,000 law enforcement firearms, which is higher than some richer countries, and even countries with ongoing conflicts such as Yemen and Syria.

The Department of Provincial Administration developed a gun database called e-DOPA License. This database was created to have an overview of the overall gun possession in Thailand; however, the database’s recent development and implementation only contains information of new firearms registrations. Earlier gun ownership registrations are undocumented. Also, the implementation of an adequate tracking system has proved insufficient due to gun permits being life-long. By law gun owners are supposed to notify the government of any transfer, trading, or distribution. However, in reality it is more easygoing than people would normally think and due to this reason, the database system serves as ineffective. It is also quite shocking how easy it is for civilians to apply for a gun permit. People can apply at more than 900 district offices nationwide and the approval of this permit is quite convenient and fast. The entire application process only takes 86 days and as unbelievable as it sounds, only costs five baht per gun. 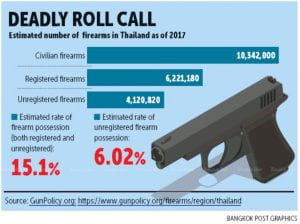 Analysis of the number of registered-, unregistered and civilian firearms in Thailand in 2017

All of this has resulted in multiple mass shootings and bombings in Thailand. In 2012 multiple bombings took place in three provinces in Southern Thailand, that resulted in 16 deaths and more than 321 people being injured. On the 17th of August in 2015, another bombing took place in Pathum Wan District killing 20 people and injuring 125 others. On the 6th of November 2019 15 people were killed and 5 critically injured due to a shooting that took place on a security checkpoint in Yala Province. In February of 2020 a mass shooting took place at a shopping mall in Nakhon Ratchasima province where the perpetrator was again a military officer. This mass shooting caused 30 deaths and wounding 58 others. In August 2022, a rivalry between teenage gangs engaged in a firearms dispute that lasted 40 minutes next to a supermarket, which led to 2 deaths, in Ubon Ratchathani province. A month later on the 14th of September, a shooting spree was committed by yet again another military officer, which also led to 2 deaths at the Army War College in Bangkok. 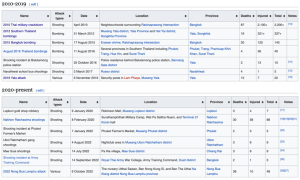 Incidents between 2010 and 2022 with further explanation of every incident

Illegal Firearms and the role of Corruption

An aspect that also has a major influence on this is the illegal distribution and selling of firearms, especially online. This is one of the main reasons why teenagers have easy access to firearms. It is very easy to be in contact with anyone within the black market online and purchase anything to your liking. The corruption factor of the Thai government plays a major role within this as well. There are multiple cases where police officers are the ones responsible for selling firearms online whenever they receive an order for specific weapons. What is also apparent, is the physical and mental abuse among military and police officers, which results in turning police stations into hotbeds of violence. Multiple reports state that a great number of draftees of the military are being physically and mentally abused and sometimes even killed during training. For the ones surviving this, it leaves an extreme mark on their wellbeing. How can anyone ensure that when these people are released back into society, they won’t unleash their pain and suffering among other people. 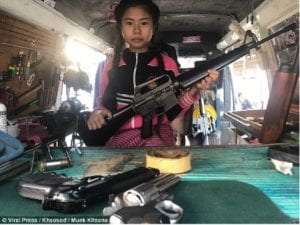 Because of all of this, it doesn’t come as a shock that Thailand comes in second place after the Philippines among ASEAN countries. There are many instances of mass shootings yearly in Thailand and despite all these tragedies there is still no attempt by legislators or policymakers to suppress gun violence. 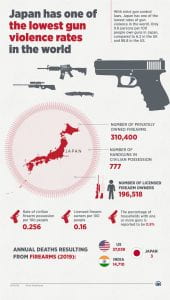 Analysis of firearms control in Japan

In Asia, the country that has one of the strictest gun laws is Japan. Japan has one of the lowest rates of gun violence in the world. Statistics show that only 0.6 persons per 100 people in Japan own a gun, compared to 6.2 persons in the UK and 88.8 in the US. In Japan the police and banks rarely use guns as a means of security, but rather use martial arts to be able to control unruly crowds. The procedure to be able to acquire a gun license is very complicated. Candidates must undergo a mandatory mental health evaluation at the hospital, must pass a written exam and must complete a shooting range test with 95% accuracy. Police and military also endeavour a mandatory background check. Thailand containing a population of approximately 69 million people, while Japan containing a population of a bit more than 125 million people, can still keep the death rate of gun violence to 3 in 2019, making it 0.02 per 100,000 people. There are approximately 56.5 million more people living in Japan compared to Thailand, however the strict gun legislation does have an immense impact on keeping the gun violence at a minimum. The strict laws on firearms in Japan can be a great example for Thailand to follow.

Due to the relaxed laws and policies towards gun legislation, it has created a high tolerance within the Thai society. Thai people look at violent crimes as individual cases and not as structural problems. There are some improvements here, with the younger generation being more aware about this issue and complaining about this situation online, stating that they are experiencing a decrease of their personal safety. However, complaining about it online does not make much of a difference, because the reality is that many others within the Thai society have a different view on this.

A great example is the recent mass shooting at the childcare centre where many looked at the mental health issue and drug abuse of the perpetrator and overlooked the structural problem that this person with so many issues, had access to guns in the first place. After the attack, the Prime Minister of Thailand announced that in order for anyone to buy a gun, a psychological evaluation is required. The Prime Minister declared that rules regarding gun permitting would tighten in response to the attack of the killing of the many innocent children. Prime Minister Prayuth Chan-ocha states “There are overlapping problems between the use of guns that cause violence and behaviour caused by drug addicts and users”. Under these new regulations that the Prime Minister announced on the Wednesday after the shooting, anyone that wants to apply for a gun license must undergo a mandatory psychological assessment and must have a character reference from an employer or authority. Under this new law, owners of already registered firearms who have allegedly behaved in a certain way that threatens society can possibly get their license revoked. This new law will also make it mandatory for current police and military officers to go through regulatory evaluations for their gun ownership. The government has also mentioned that it plans to introduce a law that will mandate people to hand in their unregistered firearms without the threat of facing any charges. Even after all these promises of the government and the Prime Minister himself in response to the massacre at the childcare centre, it is still unclear when all these laws when be implemented and go into effect. 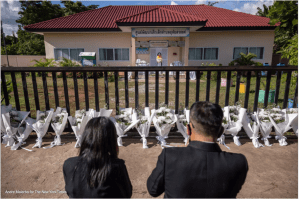 Flowers for every child murdered in the mass shooting at the childcare centre.

This recent massacre’s perpetrator had a drug addiction to yaba, which is a methamphetamine in pill form. Most of the mass shootings and mass bombings are done by men that have a serious drug problem and mental health issue. It is known that Thailand has massive amounts of methane coming in the country from Myanmar’s troubled state Shan, through Laos. Within Thailand there is a great divide between drug treatment services and harm reduction programmes, which leads to a difficulty for drug users to find rehabilitation centers in urban areas, while in Bangkok it is easier. Despite the shortage of rehabilitation centers in the rest of Thailand, there is also a great shortage of mental health professionals in the kingdom. The Thai society unfortunately already has this negative stigma towards mental health and drug use support, which discourages people to search for help in the first place. Most people in Thailand avoid talking about psychology or mental health, because when they do, the community immediately labels them as a ‘crazy person’.

This has to end 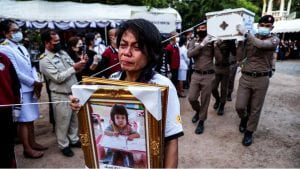 A mother who lost her young daughter in the mass shooting at the childcare centre.

There are many more laws and regulations towards gun control that need to be changed in order to legally reduce the problem of mass shootings and so many deaths within the Thai society. The government is responsible for this and needs to take upon this responsibility to change legislation to be able to not only change the mentality of the Thai people on gun control, but also to give them hope for a positive change for the future. The Thai government must realize that this is a major problem within their country. The massacre at the childcare center is a result of horrible structural management of gun control and improper support for drug users. This led to parents and family members literally losing their babies. This is not acceptable. This should not be able to happen. Unfortunately, it was not the first time, but hopefully will be the last time.

IR MP1 2022-23
The spark that started the fire Since the Petro Caribe program, which Venezuela for...

IR MP1 2022-23
In Thailand, we hold on to these unattainable beauty standards and end up segregating...