The opening of the Boten – Vientiane railway in late 2021 marked a new milestone in Laos its development. The railway, spanning 422 kilometers from the border town of Boten to the Laotian capital Vientiane, provides a massive boost in development for Laos but its drawbacks could end up being just as big.

As a part of China’s belt and Road initiative, the railway started construction in 2016 and was completed in 2021. With an estimated cost of nearly 6 billion dollars, the project is massive in scale both financially and structurally. It is owned by the Laos – China railway company. The Railway contains more than 150 bridges, 76 tunnels and 31 train stations. Since it was launched the railway has transported over a million people and half a million tonnes of cargo. 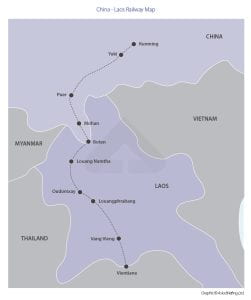 The benefits for Laos

For Laos, the project has yielded great benefits, from the tourism sector to trade, the railway turned Laos from a landlocked country into a land linked country. Laos is now better connected to China, one of its biggest trading partners. The railway also provides, through China, connectivity to Europe and other parts of Asia.

With an estimated freight value of 1.5 billion dollars, the railway has been an economic success. Cargo expenses to China’s Yunnan province have been reduced by 30 to 50 percent. The trade through this new corridor could reach an estimated 3.9 million tons per year in 2030 and could make Laos more attractive to investors, according to the world bank. According to the vice president of the Lao national assembly, the opening of the railway is “historic, providing new opportunities for the development of Laos, and people and enterprises all over the country have benefited from it”

In late 2021 a new dry port and logistics park opened up in Vientiane, these new infrastructure developments will make it easier to transport goods between Thailand and Laos and mark the starting point for goods being transported from the Laotian capital to China. When fully completed the dry port can handle up to 800 containers a day to be sent from Thailand to China. Through this new link products from Thailand can reach China in three days by rail, benefitting the trade in fresh products. 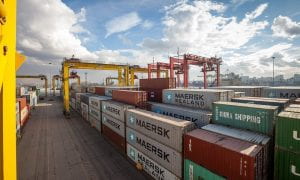 The benefits of the railway don’t just stop at trade either, with tourism from China set to increase massively because of the new railway link between the nations. After opening, tickets for the railway became hard to get fast. The Railway does not only increase Chinese tourism, however, but it also makes it easier for tourists from all over the world to visit Laos. Tourists from Thailand can now traverse the new railway just as easily from the south as the Chinese from the north.

Lastly, the railway also improves the lives of many Laotian people, bringing the travel time across the north of the country back from sometimes days to hours. Besides the logistical improvements to people’s lives the railway also provides new investment along its tracks, with more businesses opening up and more opportunities for work becoming available in the traditionally poor country.

Looking at the railway like this makes it seem like a fully positive collaboration between China and Laos without any drawbacks, but this is not the case. There are drawbacks, not only on a grand economic scale, but also on a small scale during the construction process.

An estimated 4,411 families have been relocated because of the construction work. For some of the villagers who were forced to leave their homes for the project compensation took a long time. Compensation proves to be difficult, the government has to precisely figure out how much people are entitled to. Where the government first only looked at the material costs of people’s houses, they now take into account a wide variety of factors, from trees to crops. The total number of categories for compensation numbers 242. For many villagers who had to relocate the amount of compensation and the places they can relocate to remain unclear. 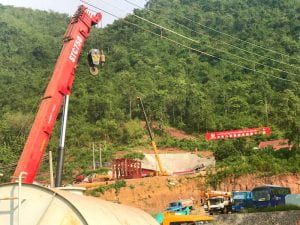 Economic drawbacks and dangers for Laos

The railway, however much economic advantages it provides does this with Chinese interests in mind, how else was China going to fund a project of this size if it did not at least benefit them. Now the fact that the railway aligns with Chinese interests does not necessarily mean it conflicts with those of Laos. Laos does need to look carefully at the railway, however, mainly at how it changes the economic dynamic between China and itself, and how it can retain its independence in the face of growing economic dependency on China.

Traditionally Laos’s closest partner is Vietnam, the reason for this is the shared history the two nations have as former French colonies and the communist governments that took over afterward. In its relationship with Vietnam Laos has always been the junior partner, taking guidance from its more powerful neighbor. In 2014 China became Laos’s largest investor with more than 5 billion invested. The Chinese investments are mostly concentrated in mining, resources, hydropower and the agribusiness.

The new railway is not China’s first economic endeavor into Laos, and it won’t be it’s last. China owns half of Laos it’s public debt and a Chinese company owns a controlling stake in Laos’s national power grid. China is also the leading investor in hydropower with reports stating that the Chinese are preparing to sign contracts to build up to 9 new dams in the Mekong River, further increasing Chinese influence over not only Laos itself but the Mekong River as a whole.

The railway only marks the latest Chinese investment into Laos and the project extends Chinese trade routes southwards, pushing into the ASEAN market. But for Laos, the cost of the project might be too high. The Asian Development Bank has stated that the cost of developing the railway is far too high for a small country such as Laos. With only 6 million inhabitants and largely relying on agriculture, Laos could never afford such a project, and this is where the Chinese have stepped in.

It is clear why Laos, even though it cannot afford such a project would want it, but what are the reasons for China to provide funding when it is unclear if the debt can be paid back. Because it doesn’t matter, the loans and the debt are only a means to an end, control. For the Chinese it will not matter if the loans can be paid back or not, guarantees given on the loans will make sure they are never on the losing end. A failure from Laos to pay back loans will only increase Chinese control and influence, which is part of the Chinese goal here.

Laos’s borrowing now represents almost 90 percent of its yearly national economic output. Laos its external debt totals some 10 billion dollars, and nearly half of it is owned by China. The railway is only a part of a bigger Chinese move into southeast Asia, it is a physical manifestation of China’s growing influence in what is becoming its backyard. Laos has to be cautious about how it approaches its economy to not become completely dependent on China. With some analysts viewing the railway and the huge debts involved as a possible debt trap. 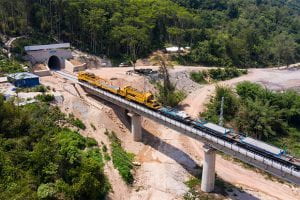 We have already seen one example of a Chinese debt trap in action, Sri Lanka. A port in the town of Hambantoto was effectively ceded to the Chinese after the country could not pay off its debts. Where the project of the port initially seemed like a good idea, the eventual costs were too high. The height of Laos its debts and its shortcomings in foreign currency to pay off the debt are clear signs that it is heading towards a financially dangerous position. It is unclear if Laos will head toward default as it are the Chinese banks who play an important role in determining this, as the lenders. Laos, however, will need to manage its finances carefully to avoid an eventual default on its loans and situations similar to that of Sri Lanka.

The railway can both help and worsen the financial situation in Laos. All the new investments that it brings can provide a great boost to its economy and help the country develop further. With Laos now being part of bigger trade networks and being better integrated into regional and global industrial chains. This development, however, greatly increases its foreign debt to one singular country, China.

With its investments in Laos China is basically turning the country into its backyard, making it completely dependent on its economy and loans. Laos will have to manage its finances very carefully to avoid becoming a Chinese puppet state. The development of the nation may, how it stands now, impact its sovereignty in a negative way.

If you want a better look at the new railway and experience the journey for yourself, here is a cool video to check out.