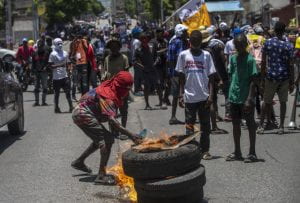 The spark that started the fire

Since the Petro Caribe program, which Venezuela for ten years provided subsidies and inexpensive finance to many Caribbean nations so they could purchase its gasoline, diesel, and other products, collapsed in March 2018, Haitians have grown unhappy over fuel shortages. Gradually the country has failed to import enough items at market pricing due to its tight finances. Fuel is frequently unavailable at gas stations for days at a time, and blackouts are becoming more frequent. An already terrible economic scenario has worsened due to shortages and government efforts to decrease fuel subsidies. According to the World Bank, more than 50% of people are living below the poverty line and making less than $2.40 a day. The country has been in constant protests ever since 7 July 2018.

Causes of the protest

Inflation has gripped Haiti causing rising food and fuel prices and exacerbating protests that have brought society to its knees. Poverty has also increased, with inflation reaching 29 percent and the prices of some basic goods, such as rice, more than doubling. Gasoline is also in short supply and, when available, costs $15 per gallon ($0.264 per litre).causes of protests

Last month, just hours after the prime minister announced the elimination of fuel subsidies, prices in Haiti began to spiral out of control causing gangs to block the entrance to the Varreux fuel terminal, resulting in a severe fuel shortage

Rising food and fuel prices have put many Haitians out of reach, clean water is scarce, and the country is dealing with a cholera outbreak. The last cholera outbreak in Haiti was caused by United Nations peacekeepers from Nepal introducing the bacteria into the country’s largest river via sewage. Almost 10,000 people died, and over 850,000 were sickened henceforth, this pushed the Haitians to protest as they blamed the Government for this cause of action

More so, political unrest in Haiti has been simmering since last year’s assassination of Haitian President Jovenel Moe, who faced opposition protests calling for his resignation over corruption charges and claims that his five-year term had expired. After failing to hold legislative elections in 2019 due to political gridlock, Moise dissolved the majority of Parliament in January 2020. causes of protests in Haiti

More so, gang violence had already increased since mercenaries assassinated President Jovenel Mossé a year ago, but it has reached shocking new heights since a battle erupted on July 8 between two criminal alliances known as G9 and G-Pèp.

In the space of ten days, more than 200 people have been killed in gang violence in Haiti’s capital, Port-au-Prince and almost half of those who died had no ties to the gangs fighting for control of the Cité Soleil neighborhood. Most victims of these gang violence are elderly women and children from the age of 10 years, and they are being raped in front of their families and at worst cases, killed if they do not comply. 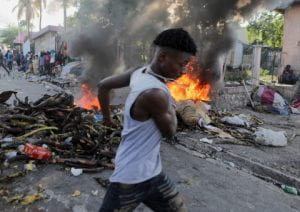 Question is, what makes the 2022 protests different?

Social unrest in Haiti has been building since the end of July 2022, frequently halting operations in significant provincial cities for several hours or even days at a time before reaching an alarming climax on September 12.

Prime Minister Ariel Henry made several announcements on September 11, 2022, among them the removal of gasoline subsidies, which will really result in higher gas prices. On September 12, the day after, protesters erected barricades throughout important cities Protests in Haiti. Even though the nation experienced significant civil disturbance in August, the pace and severity with which these events developed caught both the public and aid organizations by surprise.

The roadblocks and unplanned protests continue to cripple the entire nation. Gunfire frequently echoes across city streets and is fired at cars passing by these roadblocks. Since attacks on private and public buildings as well as attempted ransacking of companies have been recorded in various towns around the nation, including Port-au-Prince, Gonaives, and Jérémie, many businesses are still shuttered 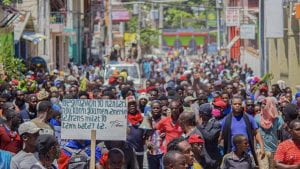 Since August 22, tens of thousands of Haitians have been taking to the streets across the country demanding the resignation of de-facto Prime Minister and acting President Ariel Henry.

Tankers waiting to transport fuel are present, but Varreux port employees, the capital’s primary distribution center, are still unable to access the location to unload shipments. Since September 12, trucks have been unable to exit the terminal to provide fuel to retail gas stations. The fundamental cause of the difficulty in the fuel supply is still gang activity. In addition to the obstacles that have severely restricted transportation for more than a week, gang activity that frequently closes roadways and terminal access continues to hinder access to the port.

Digging dip into the gang-controlled protest

Gangs are tightening their grip on the Haitian capital, razing entire neighborhoods with bulldozers, outnumbering the inadequately armed police, and escalating their savagery to within a few blocks of the government building.

The United Nations reports that over 470 individuals were killed, wounded, or went missing because of gang fighting in Cité Soleil, the biggest slum in the nation, in just a nine-day span in July. As gangs grow their territory and go closer to the presidential palace, the interior ministry, the central bank, and the national penitentiary, where ravenous convicts are threatening to riot, officials warn, government agencies and ministries have asked employees to stay at home.

In Cité Soleil, one gang, the G-9 Family and Allies, led by Jimmy Chérizier, a former police officer who goes by the alias Barbecue, has taken over additional territory from the G-pèp, a rival group. Mr. Chérizier symbolizes in many ways why Haiti is where it is now: the nation’s political and corporate elites have sponsored rival gangs to further their own goals, destroying any pretence of a functioning state.

Mr. Chérizier is allegedly supported by politicians who want to put an end to protests or compel voters to cast their ballots a specific manner. To further their economic goals, including the secure transportation of their cargo that docks at Port-au-ports, Prince’s Haiti’s wealthy families pay off his group. Due to the proximity of the ports to Cité Soleil and the fact that most of Haiti’s food, fuel, and other necessities are imported, G-9 effectively can keep the entire nation hostage by stopping trucks from dispersing the products that arrive at the port. 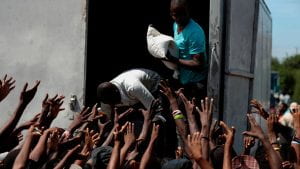 According to some Western diplomats and Haitian authorities, gang activity has increased as their political and commercial backers increase their influence and compete for dominance. Through the nation’s seaports, gangs transport massive quantities of guns and ammunition, with the assistance of government employees. Gang violence is increasing year by year and it is becoming an increasingly difficult channel to close. It has raised concerns for residents such as Stolen-future: Haiti’s gangs and its children

The concern is that will there be a brighter future for the future generations. Is sustainability even a goal for Haiti? 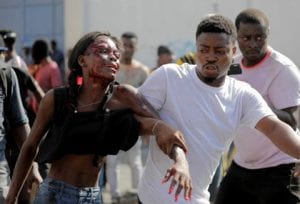 Above are a picture of a man helps a woman with blood on her face during a protest demanding the resignation of Haiti’s Prime Minister Ariel Henry after weeks of shortages, in Port-au-Prince

In conclusion, this situation is causing a lot of panic to the Haiti citizens because a lot of people are losing their lives daily due to factors like shortage of water, food and the current cholera outbreak and it is believed it will get worse if the citizens do not get the assistance needed.

by Anesu Huvaya and Thandiwe Ncube