When thinking of Thailand Bangkok, beaches, indoorshopping malls and streetfood come to mind. Today i will be writing about the latter. Al though i have never been to Thailand i find it interesting to write about this part of day to day Thai culture, as this type of gastromy is not easily found in my home country of the Netherlands.

According to the Oxford dictionary the defintion of streetfood is described as ”prepared or cooked food sold by vendors in a street or other public location for immediate consumption” When going on the base of this description, you could say that my home country of the Netherlands has a streetfood culture, mainly, fries with a splash of sauce. And when walking down markets in any major city, small pancakes called ”Poffertjes”  and waffles with caramel called ”stroopwaffles” can be found. However, any sort of nutrionial value leaves much to be desired. Dutch street food seems to be mostly based around a quick snack that one can eat to satisfy their sweet tooth, and not to actually serve as a nutritious breakfast, lunch or dinner.

When diving into the history of Thailand, As early as the Ayutthaya Period, diverse ingredients, fruits, and traditional delicacies were provided at “floating markets” in canals. A floating market is a market where goods are sold from boats in canals. They can be seen amogst countries in South-East Asia and in Thailand are also revert to as water markets. Today, they mainly serve as tourist attractions. The most well known and largest floating market is the Damnoen Saduak floating market, where anything from agricultural products and local foods can be bought. 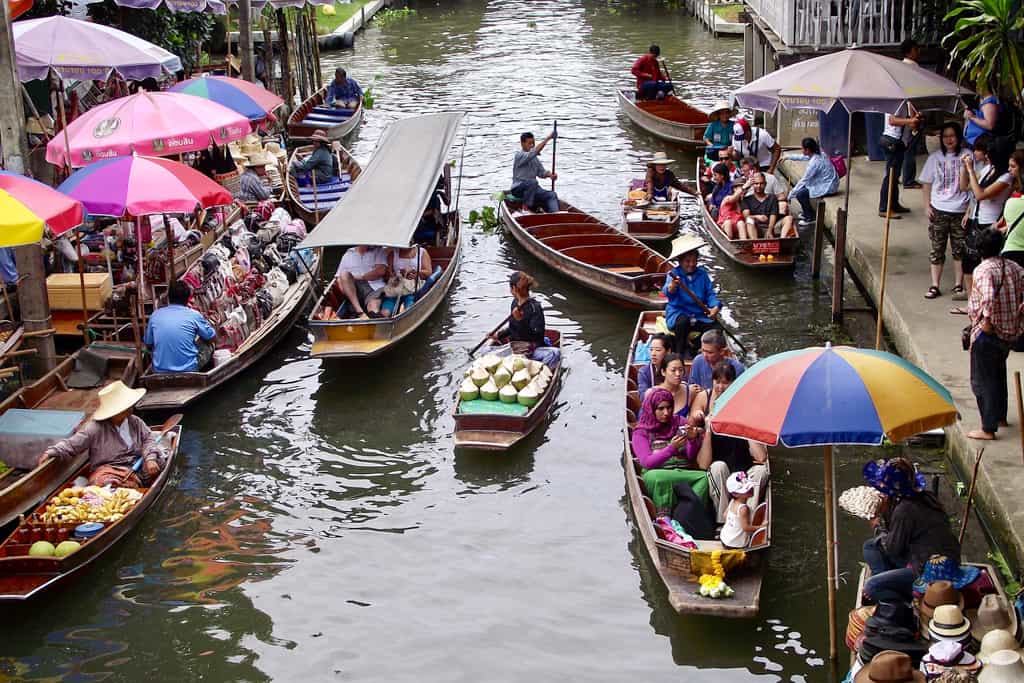 it was after the modernization and westernizations efforts by King Rama V that allot of floating markets made way for stalls on land. This laid the foundation the street food markets as we know them today. It was then by the low-paged laborers of south-east Asia who paved the way for street food to grow, as for them it was a neccesity to eat something quick in between or after work in the late 19th and early 20th century.
The populairty among the local Thai populations only started in the 1960s, Rapid urbanization and more mobility fostered this growth. The food markets, which were both inexpensive and easily accessible, tapped into Thailand’s rich culinary traditions while also reinforcing strong ties to the country’s agricultural way of life.
Nowadays, the food markets are usualy large open halls, with permanent stalls. Each stall vendor has their own selections of food items. Lightly prepared dishes with strong aromatic components and a spicy edge are the focus of Thai cookery. Thai dishes can fall into four catogories: Tom (boiled), yam (spicy salads), tam (pounded) and gaeng (curries).  There isn’t a single Thai meal that isn’t available from a street vendor or a market in Thailand. Some focus on just one or two items, while others have a full menu that rivals that of restaurants. Some solely sell pre-cooked items, while others prepare meals to order. Foods produced to order are usually dishes that may be prepared fast.

Dishes with noodles are a popular among the street food    counisours. One of the most noodle dishes is known as pad Thai. Pad thai is a noodle dish with stir-fried rice, Rice noodles, shrimp, peanuts, a scrambled egg, and bean sprouts, among other veggies, 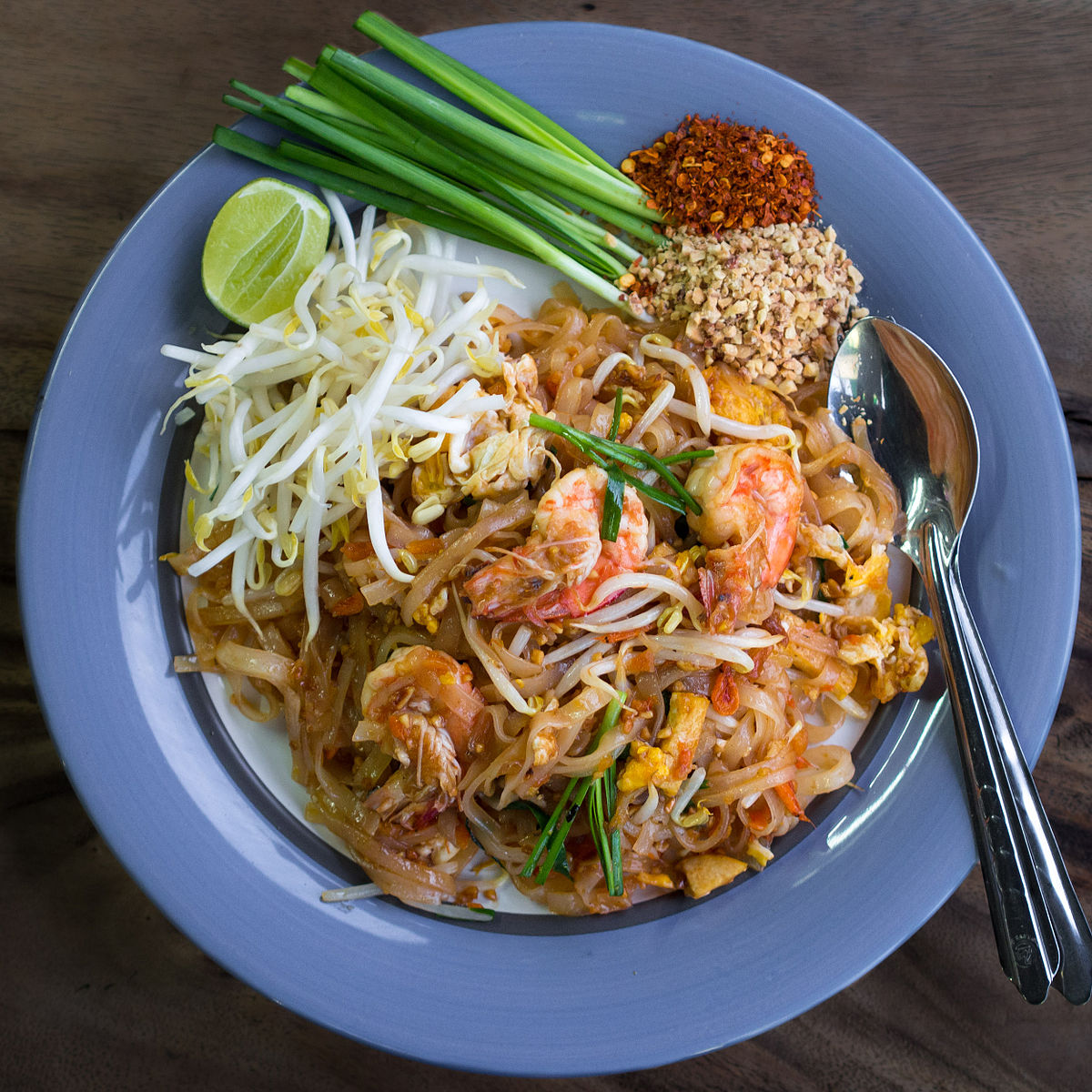 are commonly used. Pad thai is fried in a wok pan, after frying the dish, it is topped with pad thai sauce, a sauce made from tamarind, fish sauce and palm sugar. This gives the flavourfull taste, with a bit of sweetness. Pad thai is listed in the world’s 50 most delicious food and the dish has made it across the ocean to other continents as a staple of Thai restaurants around the world.

A spicy salad made from unripe papaya. A common combining sourness, spiciness, saltness, savoriness and sweetness. The 5 basic tastes in 1 dish. The dish can be made suited to your own tast by asking the vendor.

When thinking of a appropriate dish for the warm and humid Thai weather, ice cream is a treat one would immediatly think of.

The Thai found their own way to give a unique twist to the popular dessert: Stir-fried ice cream. A creamy, milky base is first poured onto a -30C metal plate. The toppings are added, and the mixture is chopped and smeared into a paste with two spatulas. Scraped into small cigar-shaped rolls, these are then placed in a pot. All of this unfolds for infront of your eyes as the vendor prepares your stir-fried ice cream.

A very popular dish in Thailand, roti klua khai, is a square Roti with pieces of sweet banana and scrammbled egg or chocolate on the inside,

Thailand is also home to some exotic dishes that can be unfammiliar to tourists and foreigners visiting Thailand.  In Thailand, insects are at times used as ingrediensts in products such as chili paste. In Thailand, especially in Isan and the north, a vast variety of insects are consumed. Many vendors at Thai food markets do sell various insects.

Mok Huak (developing tad poles)Frogs can be found in some dishes in Thailand however a plat full of Tad poles can be a bit more intimidating when served. The tad poles are deep fried and served with certain sauces,

Besides being tasty to the sweet buds street food has also flavored Thai social life.

Scorpions
Fried scorpions on a stick can be bought at Thai food markets and are very popular  amongst tourist looking for something adventurous, at times a live scorpion can also be requested.
Grasshoppers
Grasshoppers are typically fried in oil and then seasoned, usually with chili powder.

In many countries across Asia wet markets are part of the common street scene and in Thailand they exist aswell. These are market places that focus on selling fresh products such as fresh meat, fish and vegetables. In Thailand wet markets are a popular places to go grocery shopping, as the customers are guaranteent of fresh produce, aswell as the option the bargain to lower the price. Wetmarkets used to be very common around Thailand, however since the introduction of supermarket and convienence stores, more and more wet markets are disappearing, some are holding on, due to the fact that they compete with supermarkets via a lowering of their prices.

To get a impression of a wet market i advice watching this video provided via the following link: https://www.youtube.com/watch?v=FpenWNF-4Zs&t=184s&ab_channel=settime2588

So, the Thai street food scene seems to be huge, and cannot be easily narrowed down to a few items like we do here in my home country of the Netherlands. The diversity in products offered is immense and it seems that anyone living in Thailand can grab a bite at any point of the day without worrying that any sort of nutrionaul value is lost. Eating out in Thailand does not automatticaly mean eating unhealthy and I could imagine that the Thai would have at least one meal within there day from a vendor stall. People from all social-classes come together in one place to enjoy and consume food and I think that holds some value of connectivity.