What is Theravada Buddhism? Before watching the Netflix movie ”Come and See” I believed there was one way to practise this nontheistic religion, but I was wrong. As with other religions there are different ways in which the followers of Buddha practise and interpret his teachings. With my curiosity spiked, I decided to conduct further research on this particular branch of Buddhism that lives in Thailand, in the ways it differs from other branches, starting with the Dhammakaya temple and the Dhammachaiyo as its abbot and, last but not least, his devoted followers of which many are willing to give their life to prove his innocence. What accusations does the Thai government make against the infamous Dhammachaiyo and how have his followers become so devoted that they would be willing to die for him? 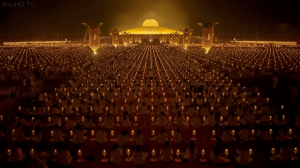 Followers gathered outside the Dhammakaya temple for the candle lighting ceremony

In 1970, north of Bangkok in the Khlong Luang district, Luang Por Dhammachaiyo, Master Nun Chand Khonnokyoong and their followers began the construction of a meditation centre. On the 29th of April 1981 this became what is now known as the Wat Phra Dhammakaya. With 791 acres the area holds a mass meditation stadium, several memorial halls, a centre for coordinating world peace activities, the Sapa Dhammakaya, which is used for mass gatherings and meditation practise, and the home to 300.000 Buddha images, namely the Dhammakaya Cetiya.

In 2014 the abbot was accused by the Thai government of embezzling 33 million dollar worth of donation money after which much turmoil occurred in and around the Dhammakaya temple. However, this was not the first time the honour of the abbot was called into question, but it may be the last time as he has disappeared without a trace after the national police searched the temple for days. The presumed illness of the Dhammachaiyo made the matter of him going through the legal process out of the question. His devoted followers protected him fiercely while being presumed to recover inside the Dhammakaya temple, however, after the government changed the law after a long 7 months, he appeared to have left the temple, leaving the question of where he may be today. Is he in hiding or is he dead? 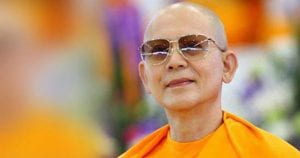 The abbot of the Dhammakaya temple, Dhammachaiyo

His followers remain hopeful and do not doubt their abbot is well and is pure of heart. In the movie ”Come and See” several followers feel grateful to the Dhammachaiyo for his teachings to an extent that they believe it has saved their lives. In exchange for the safety, hope and strength their abbot provides it is no exaggeration that their devotion stretches as far as their willingness to clean the bathrooms of the monks in the Dhammakaya temple on their knees, using a toothbrush for a tool, all the while residing the Theravada teachings and thanking their abbot.

On the other hand, there are followers from various levels of society that have fallen off the train of making merit through donations, some donations being as large as the worth of three houses, so around $400.000, devoting time and energy to the upkeep of the Dhammakaya temple, motivating others to join the Dhammachaiyo’s followers and spending many hours on meditation. Their eyes were opened to the negative face of this branch of Buddhism, which by some is perceived to be ”a materialistic and capitalist type of Buddhism”, referring to the believe that, in order to become rich, a person must donate and the strong competition that exists amongst followers to raise as much money as they can, being an example of a way in which Theravada Buddhism can be seen as an extreme version of Thai Buddhism.

This focus on capital raised from donations from the Dhammachaiyo’s followers comes from people from different social status. Some have money to spend while others have nothing. Each person contributes what he or she can in terms of labour and donations, what has led to fractured families, husbands and wives leading separate lives, and to having too little money left in families to make it possible for children to continue their studies. After being told about these negative consequences by the Scholar Monk of Dhammakaya who pleaded to raise capital by other means than encouraging large donations, the abbot responded with ”Do you know who I am? If you really think I am Dhammachaiyo, the abbot of Dhammakaya, you are wrong.”, leaving the question of whether or not the Dhammachaiyo is as pure of heart and as good a person as his followers believe him to be. Moreover, is it ethical to encourage a person to donate all he has and to convince him it will make him richer in the future, to raise capital for a religion while destroying happiness in the present?

When love and faith was given to the Dhammakaya the stability of the institution was shaken. – Dr. Banjob Bannaruji

Way of the elders: A cultural and political threat?

Apart from materialism and the large amount of capital notated with the intention to make merit, there are other ways in which this particular branch of Buddhism sets itself apart from others. First of all, the Theravada branch teaches that Nirvana is not only a spiritual place but also a physical one, posing as a strong contradiction to the interpretation of other Buddhism teachings. In addition, does Theravada Buddhism refer to the oldest existing school of Buddhism where others tend to be more openminded. This is why it is named ”Way of the elders”, originating from Sri Lanka, and nowadays practised by the vast majority of the Thai population. According to Phra Paisal, the abbot of the Pasukato temple, Theravada Buddhism with its increasing number of followers has the ability to wipe out any Buddhist teaching that does not correspond with its scriptures, including Mahayana Buddhism, a branch dominant in China, India and Japan, Vajrayana- and Cha’an Buddhism.

Buddhism once had many roles in society, but the modern state has taken over these roles. This has made it hard for any Buddhism branch to find a place in today’s modern society. Nevertheless, does the fear exists that followers of the Dhammakaya temple infiltrate high positions in governmental roles to eventually become a majority and take governmental control. Looking at Thailand’s history of governments that have been installed in Thailand after a coup d’etat it is not too much of a stretch and could easily be envisioned, even by those who do not have any prior knowledge on the subject.

The situation between Dhammachaiyo and the government is a zero-sum game. Only one will remain. – Paiboon Nititawan, Ex-Head of Buddhist Reform Council

After the Revolution in 1932 Thailand transformed into a constitutional monarchy ruled by a succession of military leaders. The most recent and current government, also located in Bangkok, exists of such military leadership that has been directly challenged by the Dhammachaiyo. The abbot managed to hide and escape the governmental forces and in doing so has shaken law and order while he presumably resided inside the Dhammakaya temple when his devoted followers kept the national police at a distance. 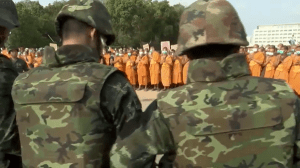 Police, Dhammakaya monks and followers in a stand-off on February 16th, 2017

With millions of Thai Dhammachaiyo’s followers fiercely defending their abbot and claiming the accusations made against him have been false from the beginning and the government having gone as far as changing the law in order to be legally allowed to enter the Dhammakaya temple after 7 months of effort, a person can speculate on the controversial Dhammachaiyo as well as the true intent of the government.

Did the abbot hide behind an illness and let his followers defend the temple while he escaped legal judgement? Did the government feel so threatened by the increasing power of the Dhammakaya that they made false accusations to tear at the abbot’s reputation, stage a raid on the temple and force the Dhammachaiyo to flee and go into hiding? What has become clear from the events that occurred between 2016 and 2017 is that Theravada Buddhism shines a bright light on those on the inside, but casts a shadow over other Buddhism branches, those that feel intimidated by the size of the Dhammakaya temple and its power, and not only the Thai government but perhaps even the future of Thailand as a nation. 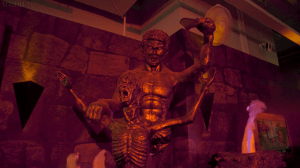 Approaching the end of this post, it is evident that some people feel Theravada Buddhism is a threat to ”true Buddhism” and that it is a distorted and materialistic branch, while other view it as their lifeline and believe it shows how people truly are and that this is the reason why it scares both people and the Thai government.

It’s better to gain enough merit while you’re alive for you may need it when you die. I’m scared, so I’d better be safe than sorry. – Dhammachaiyo follower and Theravada Buddhist

The questions that a person can ask oneself is: Does the government have the right to change the law to be able to enter a religious building? Is the Dhammachaiyo such a threat that he and his teachings can topple the sitting military Thai government with another coup d’etat? Does the increasing power put even more pressure on the already sensitive political situation in Thailand, and could this be partially resolved if the abbot were never to return? Did the abbot embezzle money, and will he ever stand trail? These questions may be answered in time, but for now one can only guess and stay up to date, so make sure to read the next post!

Difference Between Mahayana and Theravada (With Table). (n.d.). Askanydifference. Retrieved 14 March 2022, from https://askanydifference.com/difference-between-mahayana-and-theravada-with-table/