When you see a falling star or when you blow out birthday candles, do you make a wish? Do you believe that when you will find a four-leave clover, you will be lucky in the future? Or do you burn Palo Santo wood to remove bad energies from a room?

In today’s ‘Understanding Thainess’ blog, I am going to write about Superstitiousness. Thailand is number 11 of the most superstitious countries in the world. It plays a big role in society and you could definitely say it’s part of the Thai culture. But what is superstition exactly, what superstitious beliefs does Thailand have, and plays Bushism a large role in this superstition culture?

Many believe that the theory of superstitiousness is originated during the earliest days of humanity. Think of for example thunderstorms or earthquakes, food supply, or unpredictable illness. Humans feel the urge to give an understanding to things we do not know. With the hope that such powers can be influenced by actions because many humans have fear for the unknown. (1) 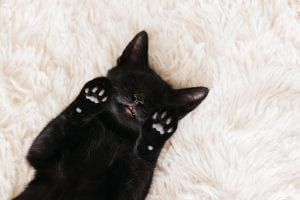 Before I move on, I will first give you an explanation of the word superstitions according to Oxford Languages ‘A widely held but irrational belief in supernatural influences, especially as leading to good or bad luck, or a practice based on such a belief’. In other words; believing in supernatural powers will have an influence on your life in the future. For example, seeing a black cat or opening an umbrella indoors gives bad luck, horseshoe which gives good luck, and knocking on wood. Although superstitiousness has no basis in science, many weird beliefs and practices do have equally weird and specific origins In the next video, there will be a short explanation of the origin of some superstitious beliefs.

The Thai word for superstitious beliefs, worshipping charms, and rituals which supposed to give positive changes to your life is ‘Mootaeloo’(2). In Thailand, Mootaeloo plays a large role in the daily life of Thai. You could say it is a part of their culture. Even in 2022, it’s still part of traditions. And of course, superstitious beliefs exist in every part of the world. But, in Thailand superstitious beliefs even ‘play an important role in Thai consumers and business decisions’ according to the research paper of Dr. Theeranuch. Superstition is also used in Thai marketing. Studies show that individuals can be easily persuaded with marketing campaigns related to superstition. Thais tend to search for superstitious incidents to give something an explanation or to give themselves a reason to not do it or do it. In other words, superstition is playing a role in their decision-making, which makes it part of people’s psychology. To give a few examples;

In Thailand, odd numbers are considered luckier than even numbers. The number 3 is considered very lucky and the number 9 is supposed to bring the best fortune. 9 is thought to be lucky because when the word is pronounced in Thai, it sounds like a different word which means ‘moving forward. For example, superstitious Thai will make sure they buy a car with a number plate consisting of those numbers. Imagine if you have a car with the number plate 9999 in Thailand, which is worth over 11 million Thai Baht. But the number is not only used in the case of cars. Also, Buddhist ceremonies where monks will attend. Such ceremonies will have nine monks to bless proceedings and ensure good luck and prosperity. (3) 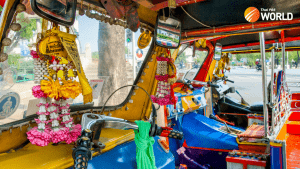 Garlands inside cars for safety

In big cities, especially Bangkok, you will see a lot of cars that will consist of jasmine garlands. Also, many taxi drivers and buses have one. The garlands are being sold in many places, also traffic intersections. The sellers often walk up and down the traffic to sell their garlands for around 20 baht. Drivers are hanging them in their car in the mirror as an offer to the guardian spirit. It is believed that this spirit is protecting the vehicle and the people inside of it. The traditional garlands are often made of jasmine, orchids, roses, or marigolds strung together by needle and threat. (3)

When a Thai child is born, the baby will be given an official name and a nickname after birth. The official name is normally in Sanskrit. Most of the time it is a very long name and it will mean something positive. For example, happiness or long life. The official name will be used for legal and official documents and happenings. (3) Nevertheless, the nickname of the child will be used the most. For school, friends, work, etc. The reason for this nickname has to do with spirits. The nickname should make sure that the baby will not be attracted by bad spirits. So Thai have a nickname to confuse the bad spirits. Also when a child is born 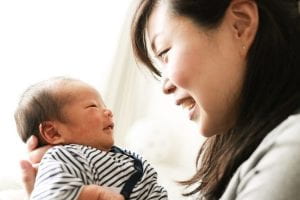 Mother with her newborn

and the child is shown to Thai family or friends, they will often say the child is ugly. They are afraid once you will say the newborn is cute or beautiful, the child will be chased after by jealous and evil spirits. Who will try to possess or damage the child. (4)

Buddhism is the most practiced religion in Thailand. Buddhists believe that someone can be ‘liberated’ from the circle of rebirths by following the so-called ‘middle way’ taught by the Buddha. The most important aspects of this way are the elimination of all material desires, developing the mind, and conducting ethically. Thai Buddhists adhere to the so-called Theravada Buddhism which came from India 2000 years ago. (5) If you would like to gain more knowledge on Buddhism in Thailand, I would recommend you to click on this link.

What is interesting is that superstitious beliefs are in contradiction with the belief of Buddhists. In Thailand Buddhism plays a big part, 95% of Thais people are Buddhist. Thai people have been indulging in superstitions, omens, fortune-telling, and lucky charms to help them to make decisions. Nevertheless, Buddha believes you could put omens and superstitions down to a lack of education. But on the other hand, in Buddhism, people go to so-called ‘long-life ceremonies’ thinking that after this ceremony, they will live a long life without changing anything about their lives e.g. their lifestyle. Buddha calls such practices ‘low art’ which means that such things are of no use. He did not 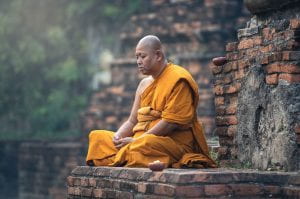 believe in fate, luck, or chance. He believed that whatever happened to you, happens because of a cause or causes. Buddha believes we have to take responsibility for our own lives. So if you want to live a long life you should be and act healthy in many different ways. According to Buddha, this is how responsible people act:

Buddha also believes in rational thought and individual responsibility rather than irrational superstitions and unhealthy fears. However, there are still small buddhas being sold to place them in a room standing towards the door to give good luck. Or to rub its belly to get good luck. Thai people will not get rid of their superstitious beliefs. (6)

1. If you point at a rainbow, you will lose your fingers. Rainbows are secret and should not be pointed at.

2. You will get bad luck if you go to a hairdresser on a Wednesday. Some barbershops actually close their business on Wednesdays for this reason.

3. Do not eat while laying down because you will come back as a snake in your next life.

4. When you are talking about someone and that person suddenly pops up, it will mean that they will live a long life.

5. Do not leave your house if you hear a gecko before you want to leave. The sound of the gecko is considered as a warning which means you will get bad luck.

6. If your right eye twitches it means you will have bad luck. When it is your left eye, you will receive good luck.

7. Do not stomp your feet in the house because it will scare the house spirits away and your house will be unprotected.

8. When you sneeze, it means that someone is missing you or is talking about you

9. Babies with birthmarks had a past life

10. A cremation should never be done on a Friday because Friday is a cheerful day (4)

(5) Everything you need to know about Buddhism in Thailand, October 27 2013, retrieved on 15-3-2022 from: ttps://theculturetrip.com/asia/thailand/articles/everything-you-need-to-know-about-buddhism-in-thailand/

(6) Indulging in superstitions- A Buddhist reflection, n.d., retrieved on 18-3-2022, from: https://insighttimer.com/blog/indulging-in-superstitions-buddhist-reflection/#:~:text=Indulging%20In%20Superstitions%20%E2%80%94%20A%20Buddhist,responsibility%20for%20their%20own%20actions.