From milk tea in cups to being a thorn in the side of authoritarianism. From Twitter meme to an international and pan-Asian movement. That is the story of the Milk Tea Alliance, better known as #MilkTeaAlliance. 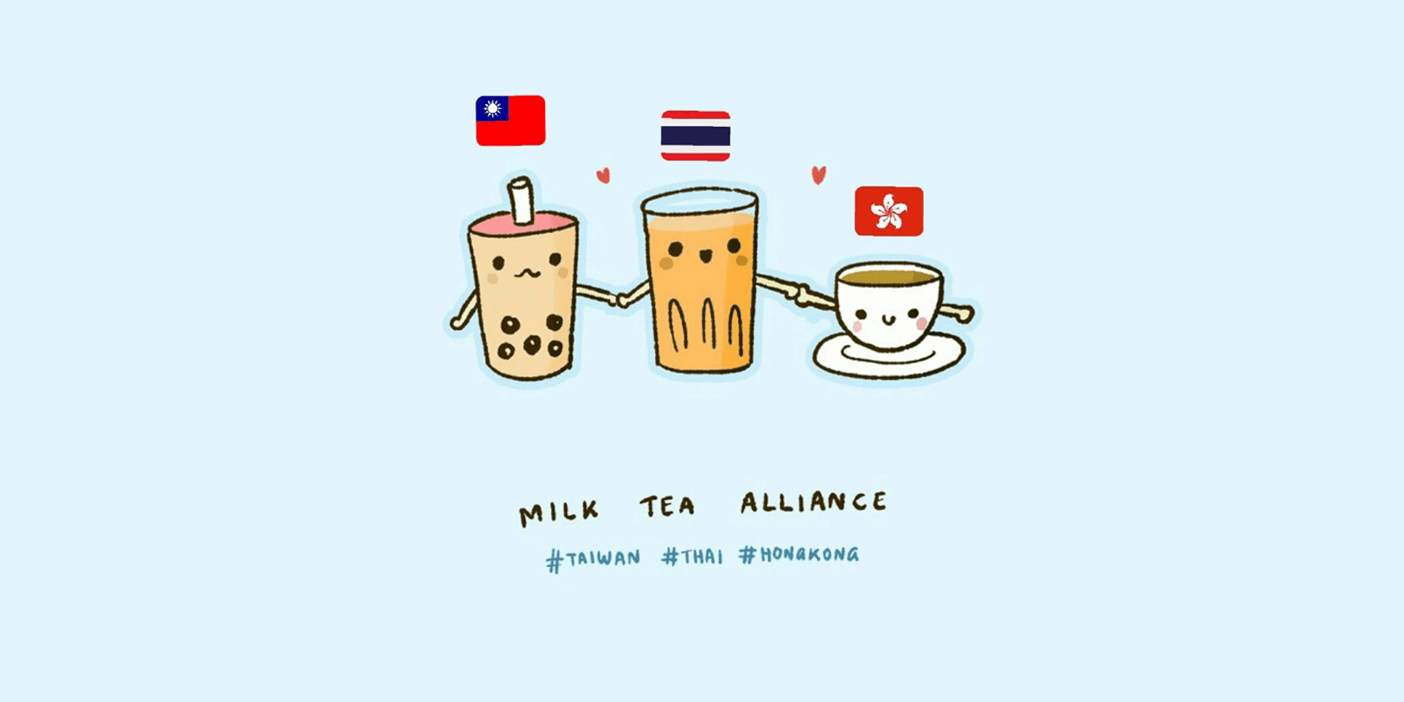 This all started back in April 2020. A Thai celebrity had liked a Tweet referring to Hong Kong as a country. This slighted China as Hong Kong is semi-autonomous territory, but under Chinese sovereignty. Soon he was under fire from patriotic Chinese social media users. The Thai celebrity’s fans shot back with humorous memes. However, the Chinese patriots made a mistake. They focused their criticism on Thailand and its government, monarchy and economy next. The Thai social media users were amused as they actually agreed with the Chinese patriots. Users from Taiwan and Hong Kong chimed in as well as they felt an ideological bond with the Thais in their online fight against autocracy and China.

Preparation of milk tea is different for each region. Thailand, Taiwan and Hong Kong all use different ingredients and colours. It is very similar to their political struggles as each one of these countries is fighting a different fight under the umbrella of the Milk Tea Alliance versus authoritarianism and China. To add to that, unlike these 3 regions, the Chinese prefer tea without milk. This is how the name of the alliance came to be. 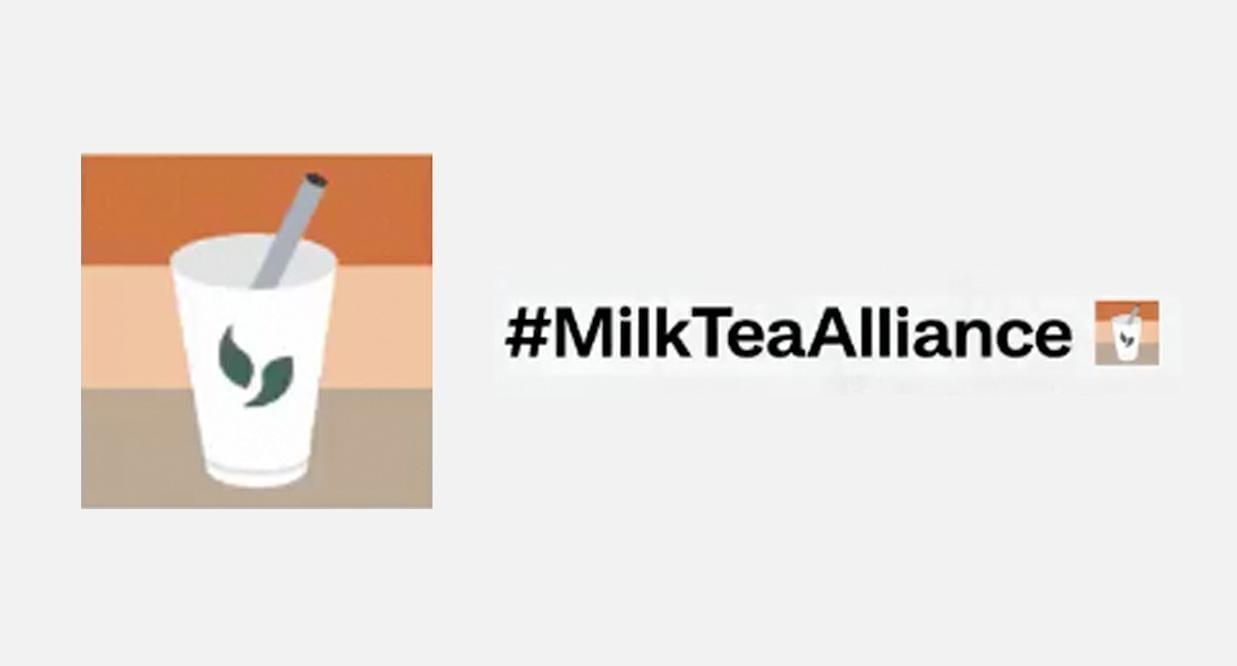 The #MilkTeaAlliance trend became so popular and widespread that Twitter even decided to create a milk tea emoji to support the cause. The milk tea emoji would automatically be added to any Tweet related to the Milk Tea Alliance. This was a big moment for the pro-democracy movement as Twitter had only done this before for 2 other big movements, namely #MeToo and #BlackLivesMatter. More information on the emoji and Twitter’s stance can be found here.

Let us focus on the alliance and all its different political struggles again. Thailand for example had Thai students marching through the streets, demanding new elections under a new constitution as well as restraints for the monarchy’s prerogatives. In Hong Kong, the people protested against the potential loss of the city’s political freedoms under Chinese sovereignty. Tensions in Taiwan are high as the Chinese Communist Party has promised to reunify Taiwan with mainland China.

According to China’s foreign ministry’s spokesman Zhao Lijian this is nothing new. He claims that people who support Hong Kong and Taiwan often collude online. China is convinced this liberal conspiracy will never succeed.

However, this might not just be yet another “liberal conspiracy”. The supporters of the Milk Tea Alliance claim that it is not even just about China. Instead, the activists are finding affinity in their shared struggle known as the pursuit of liberal democracy. 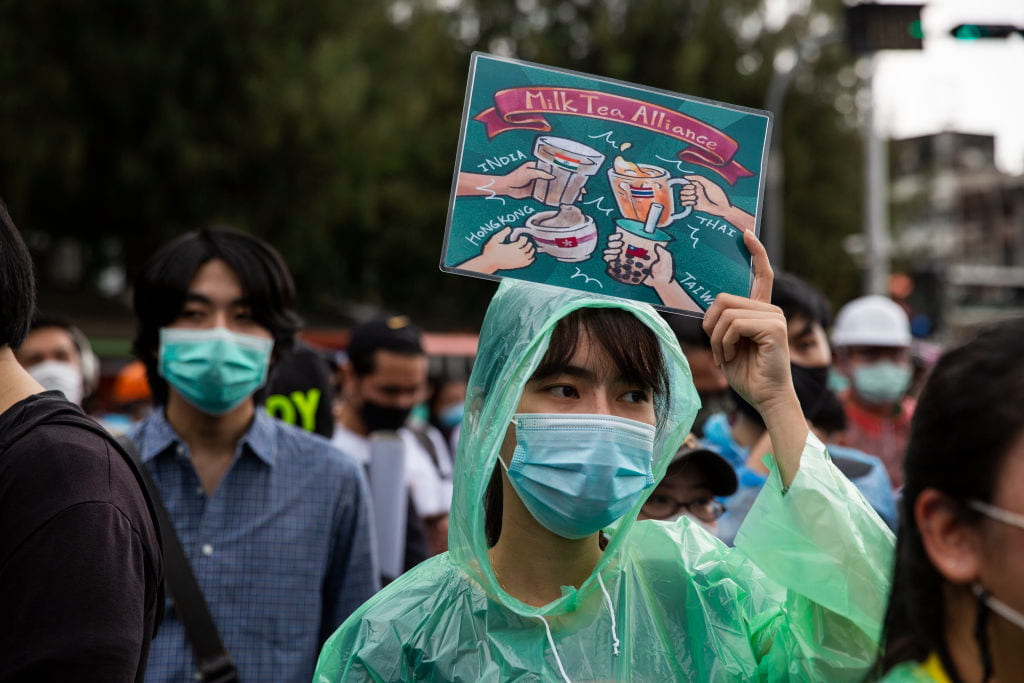 An important difference between the Milk Tea Alliance and other protests, one that really makes a difference, is the fact that social media is bigger now than it has ever been before. Not only do the activists use social media to talk with likeminded people from different regions, they also use social media to share information from the more experienced movement in Hong Kong. Examples of this are the almost guerrilla like protests that appear and disappear before police can act on it, advice on how to extinguish smoking tear gas canisters and advice on how to stay safe during the protests.

According to Roger Huang, a politics lecturer at Sydney’s Macquarie University, there is opportunity for the Milk Tea Alliance to become an actual transnational anti-authoritarian model. To add to that, Sitthiphon Kruarattikan, director of the Institute of East Asian Studies at Bangkok’s Thammasat University, claims that the existence of the Milk Tea Alliance is proof of China still being unable to win the minds and the hearts of the citizens of the Milk Tea regions without resorting to using hard power.

It did not take long for Huang’s words to take form in the real world. On the 1st of February 2021, the Tatmadaw, which are the armed forces of Myanmar, took over the country and forced a year-long state of emergency upon the citizens of Myanmar. This happened to reject the victory of the Democratic party in Myanmar. The leaders of the party all got arrested as well.

This caused the Milk Tea Alliance 2.0. Other, smaller, members such as the Philippines and West Papua joined the notorious alliance as well. 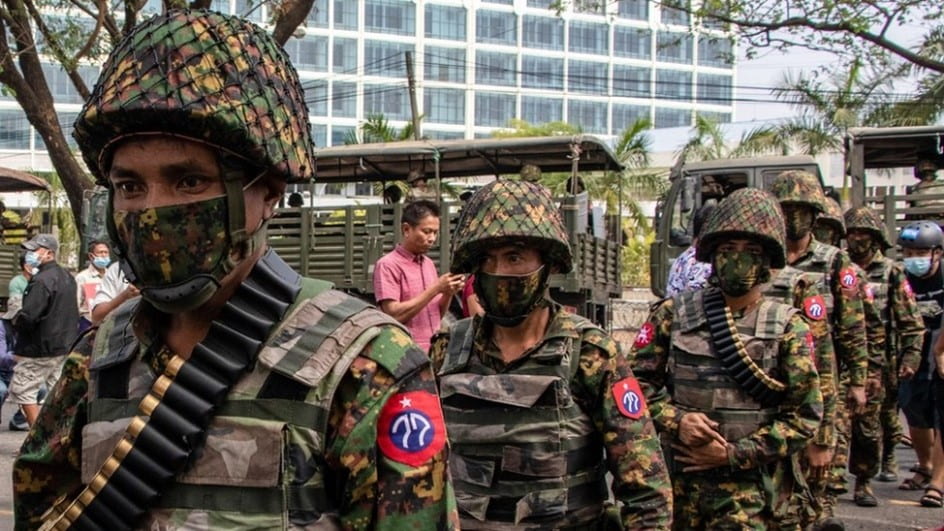 The Milk Tea Alliance was slowly growing to become a transnational anti-authoritarian model, as Huang predicted. A model that had expanded beyond just anti-China activity, but instead focused on authoritarianism in all of South East Asia. With its growth, the alliance also grew out of its social media shell. Its social media presence would still remain the alliance’s core, but the alliance also seamlessly moved to the real world. Street protests in the name of Democracy and the Milk Tea Alliance reached from the streets of Hong Kong to Yangon to Bangkok.

Recently, the alliance unfortunately faced many setbacks. Thai activists were arrested based on the very controversial “Lese Majesté Law”. This law dictates that it is illegal to threaten or insult the monarchy. In Hong Kong the activists are distracted by the new National Security Law that basically prohibits the pro-democracy protests. The law has already caused mass arrests.  Meanwhile the Tatmadaw in Myanmar have intensified their bloody reactions to the pro-democracy protests. The activists from the Philippines could not do much either, since the country was stuck in the world’s longest militaristic Covid-19 lockdown. To make matters even worse, the Philippine president, Rodrigo Duterte increased the blacklisting of Philippine pro-democracy protestors. 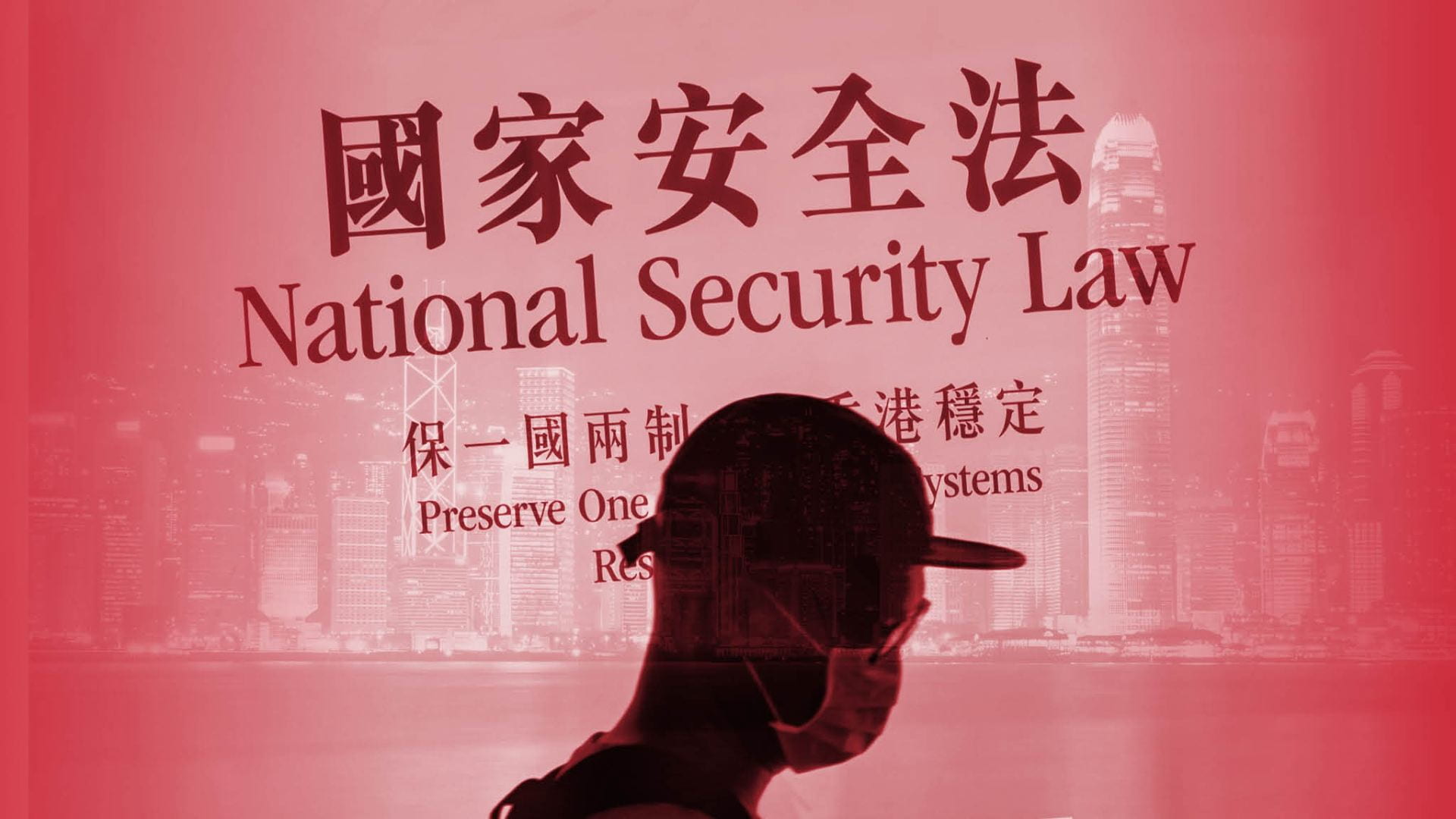 As fast as the streets once filled up with pro-democracy activists, they have emptied just as fast due to the comebacks from the authoritarian regimes. The alliance is still supported by thousands of hashtags, but those were once millions. Research done by Assistant Professor of the Department of Political Science from the University of Nevada in Las Vegas, Austin Wang, shows that most of the current hashtags are coming from countries outside of Asia. If you are interested in this research, you can read more about it in Wang’s blog by clicking here. Wang also states that the citizens of the alliance’s countries might be consumed by the issues mentioned earlier.

Despite all these challenges the Milk Tea Alliance has to face, there is still hope. The activists have not given up despite the recent setbacks. According to them the military can take everything away from them but one important thing. That one key thing is a pan-Asian generation that has grown up knowing a brief moment of freedom. The authoritarian governments might believe true power lies with guns, tanks and soldiers, but in reality it lies in the hands of the next generation. This next generation now knows what democracy is like and they will not easily give that up. The Asian authoritarian regimes are messing with the wrong generation. Hope can be dangerous, but it can also be a powerful weapon for those brave enough to wield it. 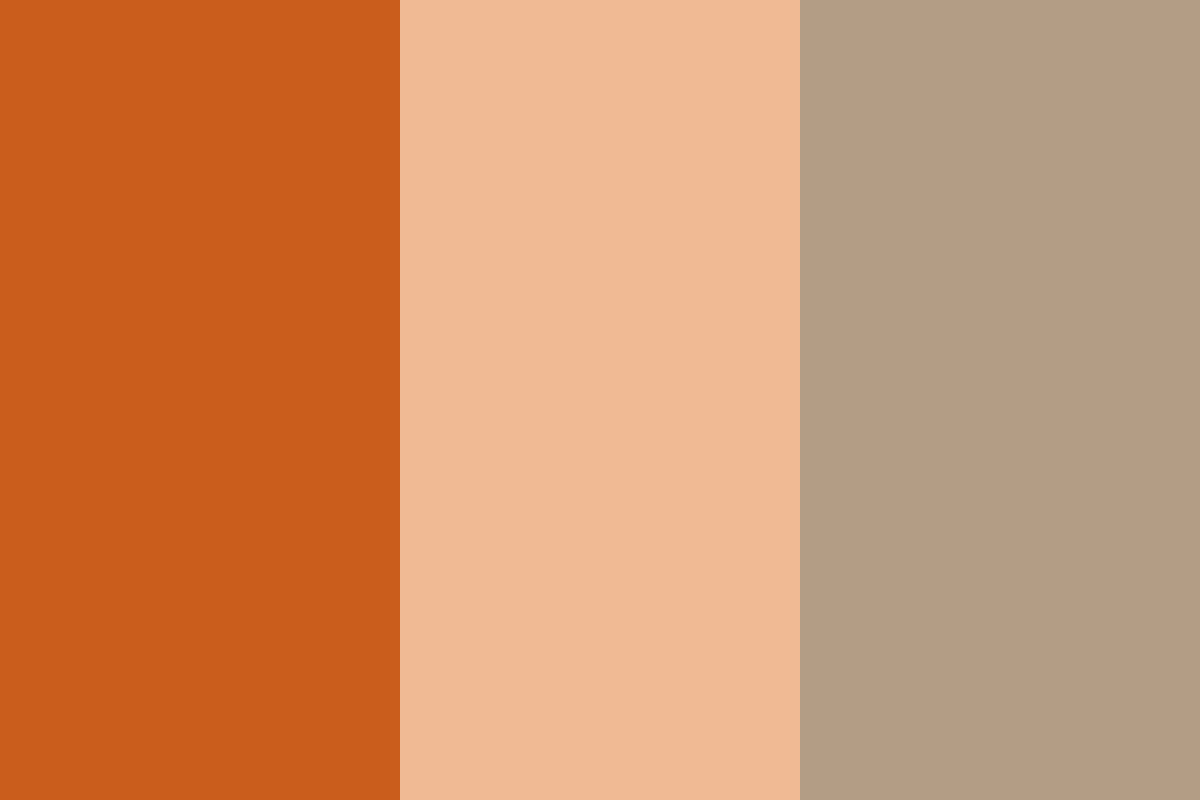 A cross-national democratic symbol that stands for fighting back against authoritarian regimes to achieve freedom and democracy. The fact that the alliance exists and has come this far, just shows that democracy is not just a Western ideal, but a universal ideal. You could go as far as saying that democracy is the only form of government that allows people to be people. After all, what are we if we cannot express ourselves and our dreams? Because that does not sound like life to me.

As a Dutchman I might not be able to physically support the Milk Tea Alliance during their protests in the streets, but I can Tweet a hashtag and spread awareness and so can you. Especially now that the Milk Tea Alliance is consumed by issues in their respective countries, we have to let the pro-democracy activists know that they are not alone. The world is still watching and the world is still with them. 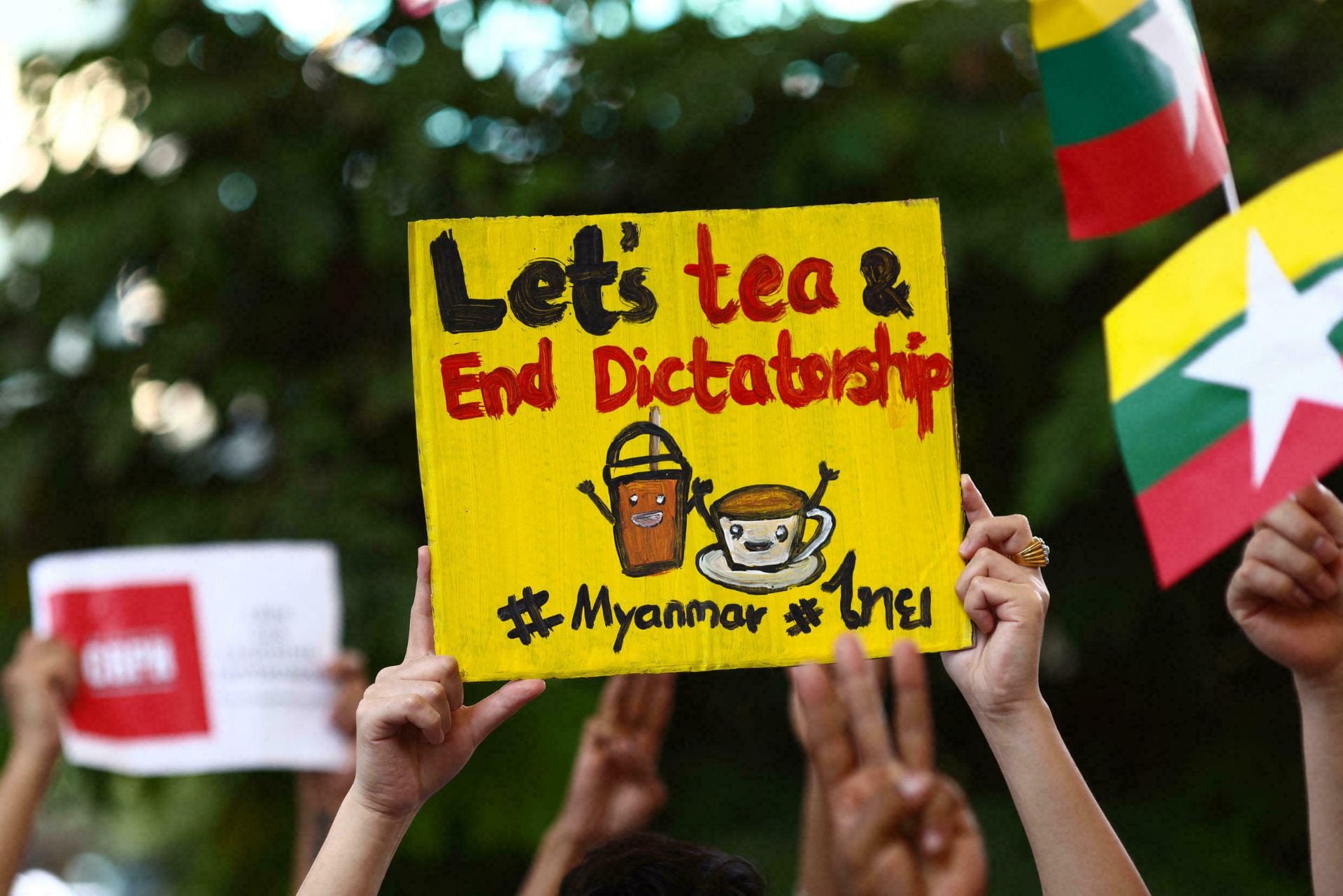 CSIS. (2021, April 1). The #MilkTeaAlliance in Southeast Asia: Digital Revolution and Repression in Myanmar and Thailand. Retrieved on November 22, from https://www.csis.org/blogs/new-perspectives-asia/milkteaalliance-southeast-asia-digital-revolution-and-repression-myanmar

Time. (n.d.). ‘We Share the Ideals of Democracy.’ How the Milk Tea Alliance Is Brewing Solidarity Among Activists in Asia and Beyond. Retrieved on November 22, from https://time.com/5904114/milk-tea-alliance/

Wang, A. (2021, August 5). #MilkTeaAlliance No More? Retrieved on November 21, from https://www.wilsoncenter.org/blog-post/milkteaalliance-no-more