– A save heaven for LGBTQ community? 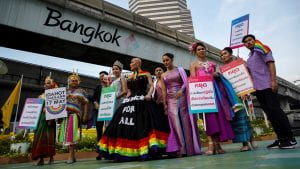 To all the people who ones visited Thailand it becomes clear that the Thai culture is more open-minded society towards LGBTQ community members. It stands for Lesbian, Gay, Bisexual, Transgender and Queer or Questioning (1). Since a couple of years this movement gets more and more recognition within several societies and countries around the world. On the first view Thailand looks like a country which is open minded and LGBTQ rights are in favor for those who need it. However, this is  not the case; there is no equality for LGBTQ members in Thailands law books (2). It is still illegal to have a same sex marriage and adopt a baby (1). For members of the LGBTQ community, it is still hard to start a family if you are a homosexual or transgender couple. In addition, it is illegal to donate blood if you are transgender or homosexual (1). This is actually common in most countries in the world especially western and more conservative countries e.g., in all European countries it is forbidden to donate blood if you are gay or lesbian. Despite these mentioned rules, Thailand is still very open towards Gay partnerships and has one of the biggest LGBTQ communities in Asia (3). How is that possible?!

Is Thailand as tolerant as we think?

The appearance is deceptive!

The historical backdrop of homosexuality and transsexual practices in Thailand has prompted in an opposing situation with the output that you see more transgender and homosexual couples on the street.  This is experienced in Thailand more than in other countries around the world. However, it is contradicted that there is still aggression and segregation towards LGBTQ community members (2). This topic is omnipresent in the Thai culture and Thai media. This contradictory reaches its climax with a message from the Thai Tourism authority which promotes on the one hand the image of Thailand as a LGBTQ paradise for homosexual or transgender people to travel to Thailand (4). And on the other hand, it forbids discussions about trans sexuality and the content available for students is very minimised or simply not available (4). Despite the fact that LGBTQ members are visible in public there is limited sex education in schools for kids. In addition, LGBTQ people mostly live in cities and not in rural areas because the population on the country side is more conservative and religious and might not consent with being transgender and homosexual (2).

LGBT individuals live inside a world with solid strain to be a productive member of the society and be dutiful to one’s family. This is cconnected with the idea that one’s sexuality or sex should not conflict with the norms and values given by the government and religion.  These people live with the daily pressure to disgrace themselves and their family (2). The Thai government does not fully accept LGBTQ people and still discriminates them on paper.

Are Transgender targeted and discriminated by  laws?

Homosexuality is not, at this point thought about a psychological sickness by the Ministry of Health; be that as it may, transgender people are still battered (5). A proposition to incorporate sexual identities under the anti-discrimination statement of the 2007 constitution was dismissed. Transsexual people can’t change their sexual orientation on official papers (2). Existing marriage laws explicitly reference conservative couples (husband and wife), mirroring a customary understanding of sexual orientation and family structure (3). All male born people in Thailand are needed to serve in the military. Nonetheless, transsexual ladies, including any biological males, who have gone through sexual reassignment surgery (SRS) or any type of a medical procedure to actually look more ladylike, are not permitted to serve in the military (2). Until 2011, they were given a letter of rejection which says ‘permanent Mental Disorder’ as the reason. After much campaigning by LGBTQ activists, the letter now says the reasons apparently “Gender Identity Disorder.” 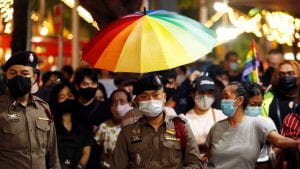 Legal and policy reform is seen as difficult both because lawmakers tend to be conservative, and since the constitution and country’s laws are seen as sacred. Although there’s no overt persecution of LGBT people, Thai society doesn’t wholly accept sexual and gender minorities (4). Attitudes towards LGBT individuals may be somewhat tolerant as long as LGBT people remain within certain social confines.  There’s an absence of understanding about the particular struggles and wishes of LGBT people. Arguably, the best and infrequently most vital struggle that a Thai LGBT individual faces is that of family acceptance. Being respectful to the desires of one’s parents and upholding a family reputation is prime to how a Thai individual conducts their life, which might run counter to those with sexual orientation or identity that don’t conform to social norms (2). Since Thailand is a religious country, most of its elderly citizens have a conservative perception of sexual orientation which drives mostly from Buddhism (1). This religion does have negative views of sexual orientation and personal identity that doesn’t conform to social norms, viewing it either as a punishment for sins in past lives, or as an absence of ability to manage sexual impulses and tendencies (2).

On every level a restraint

Due to the gender roles Thais are expected to play within the workplace and in society at large, there have been numerous accounts of LGBT people facing discrimination working settings. Many LGBT people, if possible, like better to remain introvert to avoid discrimination and stigma at work. As an example, there have been multiple reports of LGBT individuals being denied promotions, being fired from their jobs after disclosing their sexual orientation. Furthermore, as being asked inappropriate questions during interviews and job screenings because of their sexual orientation. Transgender, those that cannot easily hide their identities, suffer the most employment discrimination in Thailand, and are often limited to working in roles in hospitality, entertainment or the sex work industry. Furthermore, lack of relationship recognition also results in same-sex couples having unequal status to heterosexual couples in areas like the power to access social services, spousal insurance and benefits, and joint bank loans. 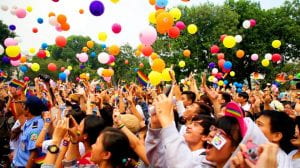 A Protest in Bangkok for LGTBQ+ rights (9)

What about the Thai society?

The general trend however, is acceptance towards the LGBTQ community and all those who are connected with it. many Thais have friends who are lesbian, gay or transgender. It is a common to see transgender Thai citizens in Thailands biggest cities (5). The country is known as a common holiday destination for LGBTQ community members. Travellers get the feeling that it is accepted nation wide, because you see it at all bigger tourist attractions and destinations (3). From the outside Thailand is portraying itself as a tolerant country to all LGBTQ+ citizens and travellers (3). Recently the government pushed a law in the parliament chamber that is set to give transgender people a chance to get a “cicil partnership”. It is planned to be the equivalent of a marriage licence for heterosexual couples (6). This could be seen as a small step forward. With this law the Thai government is thereby  degrading a partnership between transgender people. Because in the end a “cicil partnership” and a marriage is not the same which makes this law discriminating transgender people again (4). But the transgender community has organised itself over the years and voiced it concern. Since the broader acceptance of transgender, gays and lesbians  a growing number of celebrities have outet themselves as LGBTQ members (6). This is very well taken buy the Thai society and there is a growing number of people who out themselves and are being accepted. This growing community voices itself via demonstrations and other protest from.

Light at the end of the tunnel 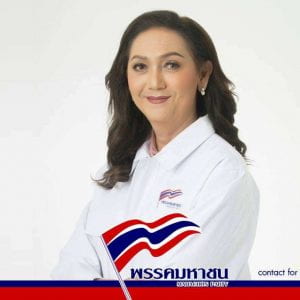 LGBTQ issues don’t seem to be included in formal sex education and aren’t integrated into the final national curriculum (2). Not only is LGBTQ not mentioned in sex education classes, but there are reports of negative portrayals of LGBT people in class textbooks that label homosexuals as deviants. This  can create a negative atmosphere around kids resulting in a negative thought towards LGBTQ community members (7). This is further deepened by school regulations to pressure kids to choose School uniform which clearly indicated male or female gender at a young age (7).  While there’s some appearance of acceptance for LGBT persons in Thai society, many face discrimination from family, education, media, legal, government, economic and non secular structures, institutions and establishments (7). There’s an excellent juxtaposition between how Thailand is portrayed globally as a haven for LGBT tourism and also the actual acceptance of LGBT persons within Thailand itself. Most of the Thai society accepts LGBTQ+ people and supports them. However, the Thai government still has to show that there are legally accepted as well (2). Thailand can feel for travellers and bystanders as a heaven for the LGBTQ+ community, but in reality the face discrimination by many laws.