In todays’ blog, we will tell you something more about the US dollar. Since it plays such a big role in todays’ world. We will go into detail a bit more on some specific subjects. Those subjects are: ‘Is the US dollar bill more than just a piece of paper?’, ‘The history of the US dollar and the connection to the world economy.’ and ‘Is their influence of secret societies on the dollar?’.

We hope you will enjoy reading and learn something more about the topics.

When we think about secret societies, the first thing that comes up in our mind, is something related to the unknown, to the things that we are not allowed to know and the powerful people which are behind it. What we don’t know is that symbols indicating the presence of it, can be found every day and all around us. Take for example money, we use coins and bills almost every day to buy something that we need.

If we take into consideration the dollar bill, which is also called the Great Seal of the United States of America, it contains symbols that we might not be aware of. The design of the bill was approved in 1782 by the Congress of the United States, initially proposed by the founding fathers that were somewhat connected to the Freemasonry and the Masons and then finalized by Charles Thomson, the brain behind the eye of Providence and the pyramid. With the pyramid he wanted to represent the 13 states 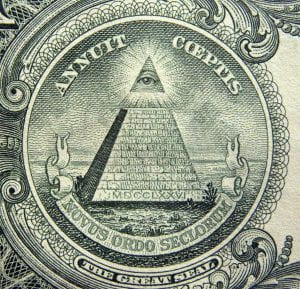 that were part of the new America and the eye to symbolize the presence of God over the nation (Wilson, 2020). However, conspiracy theorist Springmeier (1998) believes
that the layers of the pyramid stand for the thirteen families instead of the states, that want to dominate over the world.

Also, for Morris and In (1995), the eye at the top of the pyramid stands for the Sun, moon and stars that have power over the humans, and the Latin phrase “Novus Ordo Seclorum” or “a New Order of the ages” which has triggered different meaning, with one of them being the new ages that President Roosevelt had to face. Therefore, therefore there is no connection of the Great Seal to the illuminati, since the eye it is just a symbol and the pyramid doesn’t mean what has been mentioned before but just as a mean of building a nation, stating as well that even though Benjamin Franklin, which was involved in the creatin of the same, didn’t have intentions to include Masons’ symbols.

Then, always on the bill it can be found the phrase “In God We trust” which is also a phrase identified in the Masons, and when the letters are translated into mathematics, the final number obtained is thirteen, same numbers of the families

that want to take control (Case, 1935). If we also take a look at the eagle, symbol that can also be found in Freemasonry, it presents two different wings, with one showing 32 feathers and the 33, with the first representing the degrees of the Scottish Rite Freemasonry and the latter another degree of the same rite. Even the feathers in the tail show the numbers of degree of the York Rite done by Freemasons (Barrett, n.d.).

So, hopefully you thought this was interesting! We will now continue with telling you about the history of the dollar bill and the connections with the world economy.

As was mentioned before, the dollar bill contains special symbols that have a meaning behind them, but of which we might not really be aware of.  The dollar has a long history, that has been having impact on the world economy and trade for a long time already. This part of the text will tell you something more about the history of the dollar, and the influence it still has today in the world economy and trade.

The US Dollar was first introduced in the 16th century, when it was necessary in trade and war. The money was printed on paper for the first time, and through the centuries and with the different presidents, the money received a growing role, which was spread all over the world. Countries came up with their own currencies and where able to trade with it with different countries. With this, the world trade started to grow. According to Miller, Z. (2018) most countries all over the world used to set their currency exchange rate in the value of gold. That was until 1944, when the Bretton Woods agreement was signed. When that took place, the dollar received a good recognition, because of the member countries who set the exchange of their 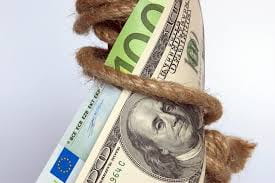 currency in terms of the dollar. When inflation started to rise in the 1970’s, the countries started to demand gold from the USA, in exchange of the difference in currency, to be able to fight the rising inflation. It completely depleted all the reserves the US had of gold. When the country was out of its reserves in gold, the current president in that time, President Nixon, got rid of the dollar versus gold exchange agreement. Ever since then, the exchange rate of different currencies has been decided by the demand and supply forces, which nowadays still have the same influence on the economy and currencies. This new beginning for the dollar meant that the dollar had become the biggest worldwide accepted currency, which nowadays, still is the case.

Nowadays, the dollar still has a big influence on the world economy. It is assumed to be the strongest currency there is. According to Amadeo (2021) the dollar can be measured in three ways. Those ways are exchange rates, treasury notes and foreign exchange reserves. The exchange rates are the most important in this case. Because the dollars’ value to the currencies of other countries can be compared.

When the dollar strengthens, American products become more expensive, but because American products are being traded all over the world, it creates a negative competition, compared to the same products, but foreign. That causes a reduction in the United States exports, and slows economic growth, because the influence of the US is that big. What also is being caused in that situation, is a decrease in oil prices, because that are being transacted in dollars. But when the situation is the other way around, and products are a little cheaper, it creates competition between the countries involved, to sell products for the lowest price possible.

The influence of the American dollar on the world economy, is also shown in international trade. According to Singh (2018) around 80% of the world trade takes place in American dollars. 39% Of the world loans are in dollars, and 65% of the dollar supply is used outside of the United States.

According to Lioudis (2019) the 3 factors that still drive the US dollar today are:

–       The fact that the US dollar has been a driver of the global economy and is the reserve currency for international finance and international trade.

–       The fact that, like any other currency, the dollar is depending on the economic activity and outlook of the United States.

–       The fact that the dollar is being influenced by the fundamentals and technical factors, geopolitical risk and the market psychology of the world.

According to Winck (2020) the dollar will strengthen in the coming year, 2021. That is because the world economy is expected to rebound in 2021, American assets will rise, and the Biden administration will continue to move further and support the US economic recovery.

Hopefully you thought this was nice to read! Now, we will tell you more about the influence of the secret societies on the US dollar.

Is there influence of secret societies on the US dollar?

In June and July, probably the richest and most influential men in the nation rush to the redwood forest in Sonoma County, California. They’re all individuals from the Bohemian Club, a private, all-male club which members are US presidents, military generals, kings of industry, business pioneers and artists (Grant, 2020). Their motivation: to get away from the “frontier culture,” or unrefined interests, of everyday people. Individuals that accumulate at Bohemian Grove are informed that “Weaving Spiders Come Not Here,” which means business are to be left outside (Flock, 2011). Bohemian Grove is an exclusive camping area in California. The individuals from the association own the property, so there is no admittance to outside people.

Numerous individuals protest the occasion every year, but they cannot reach the gates of the Club because it is privately owned land and private plus secret service security. Many consider the meetup as basically a camping area for the rich and influential to become intoxicated and get into mischief, it has been compelling in present day American culture (Grant, 2020).

Throughout the long term, some of those accumulated club individuals have turned out to be US presidents. General Dwight D. Eisenhower and Nixon were there, meeting with the Cave Man Camp. After two years, the pair would make up the Republican official run in 1952 (Flock, 2011). Nixon would likewise, purportedly, use 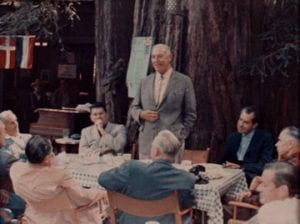 his situation and power in the Bohemian Club to start his last successful run for the White House. As per Domhoff, Nixon was “so brimming with himself over the Bohemian Grove” that he needed to give the lakeside talk in 1971 (Flock, 2011). The possibility of a sitting US president giving an in private discourse before a bunch of the absolute most influential individuals in the nation started contention in the press. The club chiefs requested that he back out, and Nixon submitted. However, the Watergate tapes demonstrated that Nixon may have had blended sentiments about the Bohemian Club. He was recorded portraying the Bohemian Grove using defamatory slurs (Flock, 2011)

All in all, the Bohemian Club made influential discissions where we feel the consequences today. From the atomic bomb to US presidents and business tycoons. All these men have a significant amount of power in the balm of their hands, and they know how to use it. Furthermore, these men know how to help and use each other’s trumps to gain influence in the free market or politics.

Barrett, D. (n.d.). The “masonic” one dollar: fact or fiction?”. Retrieved on 26th March 2021, from http://www.freemasons-freemasonry.com/masonic_dollar.html

Cain, A. (2018). A shadowy and controversial secret club meets in the California woods every year — and at least 5 US presidents were members. Business Insider. Retrieved on 26th March 2021 from  https://www.businessinsider.com/bohemian-grove-club-us-presidents-2018-3?r=DE&IR=T

Louidis, N. (2019). 3 factors that drive the US dollar. Retrieved on March 25th, 2021 from: https://www.investopedia.com/articles/forex/09/factors-drive-american-dollar.asp

Wilson, M. (2020). How has a seemingly straightforward image- an eye set within a triangle- become a lightning rod for a conspiracy theorists? Matthew Wilson Looks at the history of an ambiguous symbol. Retrieved on 26th March 2021 from https://www.bbc.com/culture/article/20201112-the-eye-of-providence-the-symbol-with-a-secret-meaning