One of the topics my fellow student Maurits and I have always found incredibly interesting, is the Japanese occupation of Thailand in the 2ndWorld War. When we found out we were doing our minor “International Relations” in Thailand, we were beyond thrilled. We wanted to learn more about the history of Thailand and even visit certain places and monuments which are linked to the Japanese occupation of Thailand during the 2ndWorld War. In this blog, we not only hope to give you a better understanding of the history of Thailand, as well as show you lots of amazing places, but we will also show you a lot of touristic attractions and other historical monuments you are able to see when visiting Thailand. If you do not know anything about the history of Thailand, especially during World War 2, then keep reading! You will most definitely enjoy this blog if you are a true history and travel fanatic.

Thailand was dragged into the 2ndWorld War by Japan on the 8thof December 1941. The Japanese invaded Thailand around the same time (due to time differences) as the Japanese Navy attacked Pearl Harbour. When the Japanese forces began their attack on Pearl Harbour, they also began to attack Hong Kong and others to begin an invasion of Malaya and Burma. In order to do this, the Japanese needed to be in possession of Thai ports, railways and airfields as a way to have a passage into the rest of Southwest Asia. Japanese troops invaded Thailand from Indo-China by landing their soldiers south of Bangkok and at multiple different spots along the Kra Peninsula. Many other invasions by the Japanese would be launched across southern Thailand. The Japanese aircrafts strategically bombed major cities in order to gain strategic positions in Thailand. The Thai army tried its best to stop the invasion of the Japanese. Unfortunately, the fighting between the Thai army and the Japanese only lasted a couple of hours before ending in a ceasefire.

Now, that is enough about the background of the Japanese occupation. On the next page you will find more information about important historical monuments. After this, we will end this blog with a more positive vibe. At the end of the blog, we will write about the must-sees when visiting Thailand! 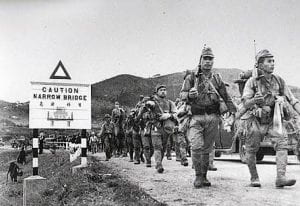 The bridge over the Kwai Yai River

Probably one of the most famous results of the Japanese occupation still visible in Thailand is the Burma Railway, also known as the Death Railway. The railway was given the name “Death Railway” because it was one of the most gruesome projects during the occupation of the Japanese. Around 100.000 people died because of starvation and physical abuse during the making of the railway. The railway has the length of a total off 415 kilometres and lays between Ban Pong, Thailand and Thanbyuzayat, and Burma. The railway was built in order to supply Japanese troops and weapons for the battle in the British colony Burma. The Thai part of the railway still exists and is even used daily until this day. You are able to take the train that goes over this railway from Bangkok to the terminus at Nam Tok. 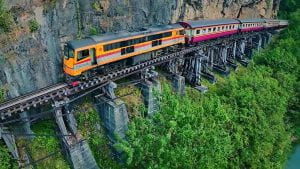 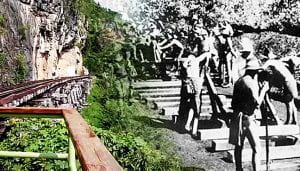 One of the most horrific parts of the railway is without a doubt the mountain range “Kanchanaburi”. Numerous gaps had to be cut out of the mountains at this point to make a way for the railway. Australians, British, Dutch and other war prisoners, plus the thousands of Asian labourers were forcibly put to work in hell here. Due to the flickering of the torches that were placed in the gulf during the night work and the hellish job and conditions that the forced labourers had to deal with, the gulf was soon nicknamed “the hellfire pass”. The hellfire pass is located about 80 kilometers from the city Kanchanaburi.

Most people will visit the museum and the biggest gap in the area, for the people who would want to see more of the area there is a path which leads to where the railway ones was. But do not get it twisted, this climb is a pretty tough one and is not for the weak minded!

This route will also lead you to other gaps from which some have been completely destroyed by bombs at the end of the war. On a view spots along this path, you wil have an amazing view over the Kwai river and the mountains which form the border between Thailand and Myanmar. In this area are also the graves of 124 prisoners of war which lay there burried until this day. The amazing view gives you a moment in time to really think about what has happened to these people. 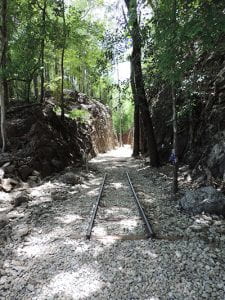 Now that we have covered the historical part of this blog, it is now time to show you the must-sees when visiting Thailand. Below, we made a list of the most beautiful attractions and places you must witness in person. We hope you will find inspiration for you next trip to Thailand!

The Grand Palace is most definitely the most famous landmark in Bangkok. You will not want to skip visiting the Grand Palace when traveling through Thailand. The Grand Palace was built in 1782 and was the home of the Thai King, the Royal court and the administrative seat of government for more than 150 years. The beautiful architecture and details leaves everyone in awe who visits the Grand Palace. Today, the complex is known to be the spiritual heart of the Thai Kingdom. Thai kings have stopped to live in the palace since the 20thcentury, but the complex is still used to host ceremonies. Within the complex of the Palace lays the famous Wat Phra Kaew, also known as the Temple of the Emerald Buddha. The Temple of the Emerald Buddha contains the actual famous Emerald Buddha that dates back to the 14thcentury.

Important: A strict dress code applies when visiting the Grand Palace. The Temple of the Emerald Buddha is one of Thailand’s most sacred sites, therefore all visitors have to be dressed properly before being allowed to enter the temple. Men must wear long pants and shirts with sleeves). If you’re wearing sandals or flip-flops you must wear socks, no bare feet are allowed. Women must be similarly modestly dressed. No see-through clothes, bare shoulders, etc. 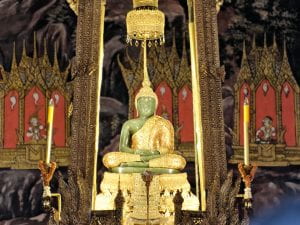 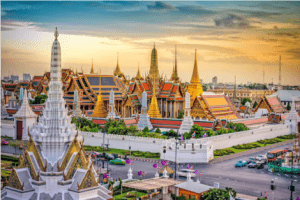 The Similan islands are a group of islands and rocks which lay around 80 kilometres from Phuket. You are able to visit these islands via a speedboat or a slower boat. The slower boat however takes 8 hours to get there, so we would really recommend you to take the speedboat from Phuket. The area has been declared a Marine National Park since 1982. Taken from the Malay term ‘sembilan’, which means ‘nine’, the word Similan refers to the nine main islands in the group. The waters surrounding the islands are famously known worldwide for the wonders that lay beneath. It is known as the most interesting diving area in the world, as well as a favourite destination of boat tours. At a first glance, the most striking features of the island are the massive boulders that show on the western and southern shores on multiple of the islands. Not only this, but many of the islands also have these beautiful white coral-sand beaches where you can relax the rest of you day until it is time to head back to the mainland. So, if you are a real diving fanatic, the Similan Islands are the place for you! 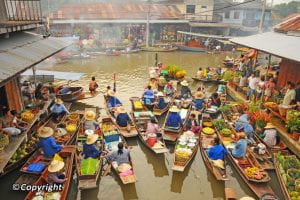 It is no secret that elephants are very dear to Thai people’s hearts. In Thailand, the elephant is a reserved species. Many of statues and paintings can be found of elephants in the royal palaces and many temples. Yet, nothing beats the excitement of seeing these wonderful creatures in the wild.  At Khoa Yai National Park, you get the opportunity to see the elephants in the wild. You will really be able to grasp the behaviour of the elephants in their natural habitat since they call the National Park their home. You’ll run into the elephants roaming near rivers and crossing streets. The National Park is also home to many more tropical creatures and even consists of many waterfalls, including the 150 meter tall Haew Narok and the even more famous Haew Suwat, which was in the film ‘the Beach’ by Leonardo DiCaprio.

In the historic city of Ayutthaya, you will find many ancient Thai ruins from the former capital. In ancient Thailand, the city of Ayutthaya was the most important city in the country and the old palaces and temples really show that.Over a hundred wats, chedis, prangs, and thousands of Buddha statues are spread around the park. If you want to visit the historic city Ayutthaya, it is able to travel with the bus or take the train from Bangkok. 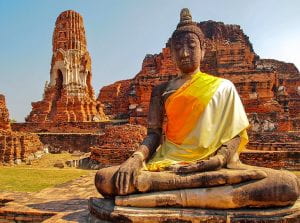 Possibly one of the best-known wats in Chiang Mai, the second largest city in Thailand, is located atop the mountain Doi Suthep. This is one of the most famous location for Buddhists and travellers from all over the world. So, it must come to no surprise that when visiting Doi Suthep, you will be met with praying monks and witness worshipping rituals. To be able to reach the top of the mountain, you will have to climb a view set of steps, so be sure to bring your best walking shoes. Once you have reached the top, you will created by multiple different local food shops where you can taste local foods handmade by the villagers from the surrounding mountains, as well as souvenir shops where the locals sell masks, elephant carvings and home furnishings. 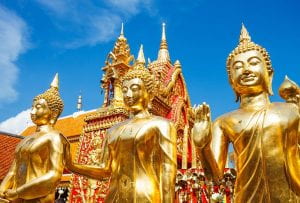 If you are more on a relaxing tour, we advise you to definitely check out Railay Beach. Railay beach is located in the province of Krabi, which is known for its beautiful and famous beaches, with Railay beach being the most beautiful of all. When visiting Railay beach, you are met with white sand, clear blue water and a real feeling of being in paradise. You are able to reach Railay beach by boat from Krabi town and Ao Nang. When you are on a relaxing tour, Railay beach can be a great stop for you. However, more adventurous travellers are also able to find what they are looking for at Railay Beach. The area is also very famously known for its oean rafting, kayaking, snorkelling and scuba diving, and you are even able to rock climb since it is a rock-climbing hot spot. 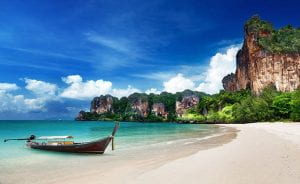 It is no secret that the people of Thailand have gone through a sensitive time looking back at World War 2, which was mentioned in the beginning of this blog. It is important to keep looking back at these moments in time and remember the people who were lost during these battles so that this may never happen again.

If you are a real history fanatic and love to travel such as my fellow student Maurits and I, you will definitely want to visit these places together with the most famous and beautiful tourist attractions in Thailand. Maurits and I believe that in order to create a larger understanding of the people in Thailand and the rich history of the country overall. it is good to take a look at how these beautiful historical monuments and places came to be. We really hope this blog will catch the attention of people and will help to bring more people into Thailand, since it is such a beautiful country with an amazingly rich history. You will not want to miss out on seeing these wonderful pieces of history in person!