The previously untouchable topic in Thailand – Angry protesters break this cycle by openly criticizing the monarchy. The protesters are also demanding changes in politics.

Siam (now Thailand) was a kingdom under an absolute monarch for over seven centuries before 1932. In 1932 the absolute monarchy was put to an end in Thailand (roughly translated “Land of the Free”), as they had a coup which introduced a parliamentary government (BBC, 2019). From then on, the monarchs’ powers were operated by a prime minister and the national assembly.

Since the 21st century, the function of the Thai government has increasingly been tested by researchers, media, and observers. As more educated pro-democracy interests started to communicate their discourse, the government strengthened their laws. Many assumed that a progression of laws and measures identifying with lese-majeste in Thailand are impediments to hinder free speech.

Since the end of absolute royal power in Thailand, many periods of unrest have emerged across the population. As a response, there have been 13 coups since 1932. The latest military coup happened in 2014. Headed by general Prayut Chan-o-cha, the militia took power (BBC, 2014).

In 2016, a new constitution was approved, giving military power to the political life. The citizens were unhappy about the results of the elections from the previous year. In 2019 Prayut Chan-o-cha who was the military general, left the army to run for office as a civilian. Appointed Prime Minister by the Parliament, critics say this will only prolong military power (Aljazeera, 2019; BBC, 2019).

The new elections can be seen as neither fair, nor free. The government tried to hinder the opposition in every possible way. During the election campaign, the general was the only candidate shown on television. He changed his uniform to a suit, gave himself affable and sang with his supporters (Senzel, 2020).

After campaigning with the support of military-backed parties, election results disputed by opposition figures returned Prayuth to office. His continued role as prime minister ensured that Thailand’s military remained at the heart of Thai politics, even after civilian rule was restored.

Lese-majeste law – forbids the insult of the monarchy

The first criminal code in Thailand was created in 1908. A specific article of this criminal code says anyone who defames, insults or threatens the king, the queen, the heir-apparent or the regent can spend prison time for up to 15 years. The government says that this law is of great importance to protect the monarchy. The cybersecurity, rebellion, and lese majeste laws have especially been backed up since the Thai military took power in 2014. The UN has asked more than once, to revise this law as many believe that this Article 112 is one of the strictest criminal-defamation laws. If we take a look back in time, this law was used to protect the monarchy against military coups, now it is a violation of the Human Rights since it is used to oppress free speech (BBC, 2017). The police, military, security agencies and private ultra-royalist groups are monitoring social media and other forms of digital communication. That is how the military backed government is able to block or rather ban social media sides, printed as well as online articles and other formats which have been criticizing the monarchy (Impiombato & Beattie, 2020).

Why are the protests happening now?

King Bhumibol Adulyadej was a well-recognized king for 70 years. Many had a high opinion of him and he was also seen as a god-like figure. King Bhumibol died in 2016 has been succeeded by his son Maha Vajiralongkorn (Rama X).

Citizens of Thailand adoring the monarchy.

Bhumibol Adulyadej’s son does have an inviolable status, however he is not as well recognized as a king as his father was (BBC, 2017; Tagesspiegel, 2016). The cause could be his absence in Thailand. King Maha Vajiralongkorn has a second residence in Bavaria, Germany, where he stays most of the year. Also, during the lockdown when the whole of Thailand had to stay home, the King was residing at a luxury hotel in Bavaria. For about a decade he has had his second residence in Germany, where he walks around more freely and is in many gossip magazines for his unkinglike behavior (Kirschbaum, 2020).

These protests have started with mainly students (mainly 15-22 years old). Highschool and university students do not believe that this current government represent their needs and their future. The students want Thailand to grow in their development and thereby move further into a different direction. They feel like Thai people are being oppressed by the government. The generations grew up under the military regime. Even though there was a new election, the prime minister did not change. The youth wants change. They want a more free, democratic, and equal Thailand. They see how, for example, countries in Europe can debate freely.

How do they see this? They are connected. The new generations grew up with the internet and social media. Thailand’s inhabitances have the opportunity to look beyond the borders of Thailand and compare countries as well as see the freedom others have. These online communications have a significant power as they can shape political discussions internationally. If the government takes down, for example, a Facebook page, a new page will be created. That is why the government cannot take on the battle with the internet any longer (Impiombato & Beattie, 2020).

Footage by the media expose the King being at an airport in Munich wearing only a crop top. In protests, people spoofed this scene. Six months ago, they would have ended up in prison for doing this. Now it is a proof that if the population stays together, one person alone cannot be blamed. As more people speak out about what is going on, fear to stand up is decreasing.

The face of the protests, Panusaya Sithijirawattanakul, said in an interview that, now the internet is available to almost everyone, people can find information about the King’s bizerre lifestyle. She also stressed that the citizens of Thailand do not want the dispose of the Monarchy but be able to openly speak about the royal family like they do in Great Britain (Senzel, 2020).

What are the protest’s demands?

The letter which Panusaya Sithijirawattankul gave the police had three main demands: monarchy reform, the resignation of Prime Minister Prayuth Chan-o-cha and his government, and the drafting of a new, more democratic constitution to replace the current one drafted under military rule.

How does the world-wide Covid -19 virus affect the protests?

On top of everything, the Thai government was clamping down on free speech amid the Covid-19 crisis. The government announced that everyone must be careful about social media misinformation and everyone who uses social media to distort information will be scrutinized. This violation of human rights, included censorship of news and information, added heat to the unrest and caused stronger questioning of the authorities.

The Hunger games and Thailand

Thai people use the “three finger sign” from the trilogy “Tributes of Panem: The Hunger Games”. In the movie the three fingers stand for admiration, gratitude and saying goodbye to someone you love. The Panem sign is also a symbol of resistance. In the books which were made into movies, the symbol was used to stand against the regime/ capital/ government together. Nowadays, protesters use this sign as a symbol for the democratic movement and in extension for resistance against the military regime (thehungergames, n.d.; n/a, 2020) 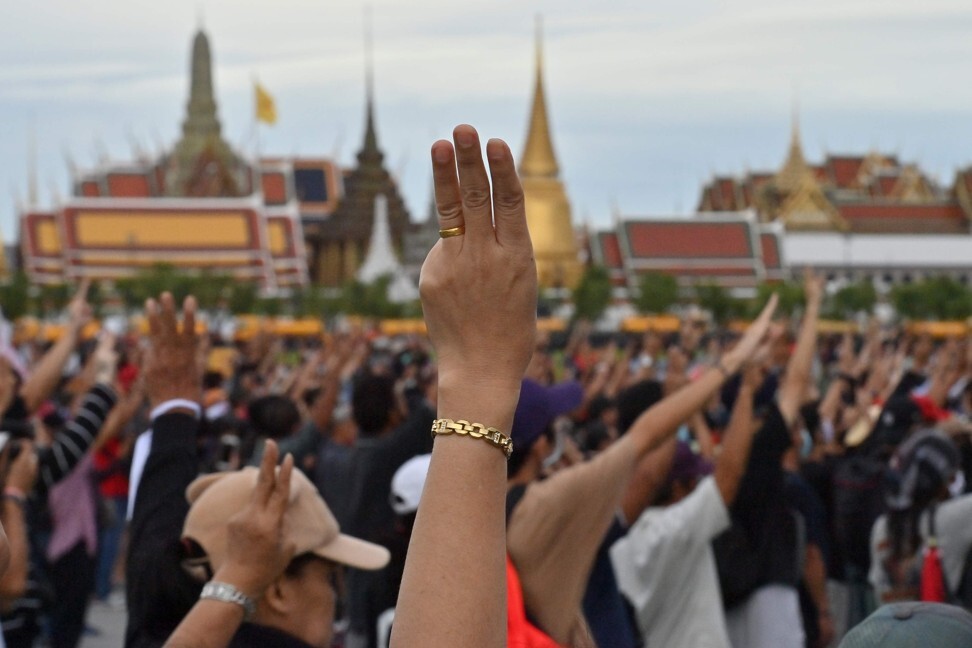 These had not been the first student lead riots. In 1973 students in Bangkok brought the fall of the military government. After this milestone, free elections were held but the resulting government had stability lacks, so that then in 1979 the military took over again (BBC, 2019).

Panusaya Sithijirawattanakul (also called Rung) is the face of the protests happening in Thailand right now. She is a 22-year-old university student living in Bangkok. She studies Sociology and Anthropology at the Thammasat University (Sullivan, 2020). In an interview, Rung said that for not doing homework in school the students where physically punished. One day, the whole class did not do their homework and was supposed to be punished. Rung had recently heard that this law was abandoned and she rebelled against the punishment. Her classmates did not dare to say no. She added that it is a shame that the people supposed to educate them about their rights are withholding them from them. In 2018 she began to be politically active (Senzel, 2020).

Panusaya and her friends have drafted a manifesto for the people and especially the government to hear. As no one of her group stepped up because they were not ready to risk the public display at that time, Rung herself agreed to present their demands. She did not want to hide them anymore (Senzel, 2020). The world held their breath as she managed not to go to prison. Then, on August 10th 2020, she presented a 10-pointed manifesto, which criticized the monarchy in Thailand (Sullivan, 2020).

On October 15th of the present year, she and several other key activists were arrested by the police. The arrest was streamed live as she was being carried into a car. Panusaya Sithijirawattanakul shouted “down with feudalism, long live the people” (BBC, 2020).

The military is still keeping up their arrests. The people who are getting arrested are saying that their arrests are not unnecessary as they stood up against the regime and help the population to make a change (Bär, 2020). As the pandemic is still spreading across the world, Prime minister Prayut issued an emergency decree and forbit gatherings of more than four people. The protest is still carrying on today with security precautions usually wearing masks. At the last big protest, the military was using water cannons against protesters. The government has also added curfew form 6 pm and declared these protests as illegal (Tageschau, 2020).

The protests are ongoing and will probably not stop anytime soon. With protest leaders recently imprisoned due to the lese-majeste law, people are furious. Freedom of speech is once more at risk. Along with the Covid-19 news around the world, we will continue to hear from the Thai protests. Will the citizens of Thailand ever be able to openly critique the royal family and demand fairer leaders without fear of ending up in prison?

Kirschbaum, E. (2020, October 24). Is Germany about to lose patience with its Thai king guest? Retrieved October 28, 2020, from https://www.scmp.com/week-asia/people/article/3106641/germany-about-lose-patience-thai-king-maha-vajiralongkorn