Let’s start at the beginning, a supply chain is the route that a material or goods goes through before it is sold as a product to a consumer. It is a network of companies and suppliers in order to produce and distribute a product to the final buyer.

Back in the day this was always an easy chain, if we look at food for example: the farmer has grain, they sell it to the miller who will sell the flour to the bakery. The bakery will make a bread from it to sell to the customer, easy. 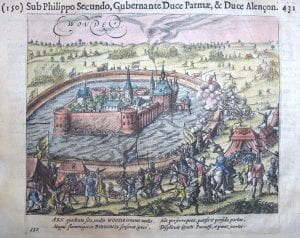 Invaders trying to win over the castle

But it was important that the chain was not disrupted. During the Middle Ages, when the invader did not succeed in invading the castle then they cut off the food supply chain in order to still win the castle. Because with no food or other supplies coming in…

Of course there were also supply chains a lot longer. We continue looking at the grain supply chain but now we are in the first century BCE, at the roman empire. Bread was the most important item in the Roman diet. The Roman government even had a term that they used: CuraAnnonae (“care for the grain supply”), to describe the essential import and distribution of grain to the residents of the city of Rome. A shortage of grain to make bread, or a large increase in the price of grain, could have serious political consequences, including riots of the populace which impacted the stability of the Roman government. 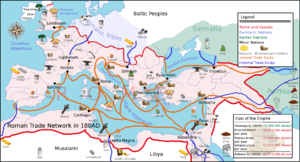 An important side note is that most of the grain came from the north of Africa and Sicily. Thus the grain first had the to be transported by boat all the way to Rome. This meant 500 kilometres (310 mi) from Sicily, from Carthage in North Africa more than 600 kilometres (370 mi), and from Egypt more than 2,000 kilometres (1,200 mi) and that is calculated in straight lines unfortunately sailing ships do not go in straight lines often. This caused that the earlier mentioned serious consequences, at a shortage or increase in price of grain, happened quite regularly.

An example, a bit closer in time, of the importance of an uninterrupted supply chain is Napoleons eventual defeat against Russia. The Russian used the war tactic of Scorched earth, meaning that the Russians destroyed all the left over supplies during their retreat to prevail the Franch from being able to use it.

This caused that after the battle of Borodino, when Napoleon captured the city of Moscow and expected the surrender of Russia, he came to a nasty surprise. Because with no supplies left for the army to live from, being more than 600 miles into the enemies’ land and the winter just around the corner, Napoleon was forced to leave after a month of waiting. And retreated back home. Almost the same thing happened to Hitler when he tried to invade Russia during the second world war.

The conclusion we can draw is, the longer the chain, the more unstable it is. Currently we are the lucky ones, living in a war free country, a globalized world with many suppliers from all different countries to choose from. No direct risks of an interruption in the supply chain, okey the Corona virus makes it a tad bit more difficult but you can still order everything you want. And because we have it so well, we want to share this. And there comes in the Ethical supply chain. Because what is ethical, ethical is having human rights and working in a safe environment for a fare wage. It is the banning of child labour and modern slavery. But to be honest, we have a long way to go. Because do you know if things we buy are made in a fair way? With no child labour or any of those awful practicing’s? Do we have an insight into these facts?

Examples of aspects of an ethical supply chain

We all know that our mobile phones contain a range of different metals, an example is wolfram and graphite. Do you think, that Apple or Samsung checked with their suppliers how they mined each of them, if the people mining underground the ground were safe at all times and paid a fair salary?

A while ago, December 2019, Apple, Google, Dell, Microsoft and Tesla have been named as defendants in a lawsuit filed in Washington DC by a human rights firm on behalf of 14 parents and children from the Democratic Republic of the Congo (DRC). The lawsuit accuses the companies of aiding in the death and serious injury of children who they claim were working in cobalt mines in their supply chain. 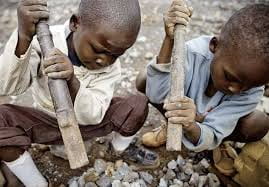 The lawsuit is still running so I cannot tell if it is true what they claim but just for one second what it would mean if it is true. It is understandable that it would cost large companies like them a lot of time and money to figure out where everything comes from exactly but it is worth it, right?

In 2013 a Dutch company launched a movement for fairer electronics. They started making a phone from scratch, building relations with miners and other suppliers, completely focusing on making the production as ethical as they can be.

And they tried but they could not fully complete, a phone contains 1/3 of the existing elements in the periodic table. They had to prioritize, a choice on which metal they would focus on in order to produce it the best way they can, to still make a change. They came up with a top 10 of materials that they wanted to focus on but they had to start smaller. They chose the 3TG: tin, tantalum, tungsten and gold, these were the reason they lauded the movement. This was the place were they knew they could make a change.

The aim was to work in countries or at places with the stamp of being a high risk area for an unethical way of suppling. Areas can receive this stamp from the United Nations when for example there is a lot of poverty and people with power can easily make them (and their children) work for a small amount of money. They started locally, knowing the people running the mine and worked all the way up to the actual selling of a phone. And the company constantly works on the other six materials were they still want to make a change with.

So even a newly started company that solely focused on the ethical way of producing can not 100% guarantee that their supply chain is completely ethical. I found it a devastating thought. So what are we going to do? How will we ban child labour from our world?

The companies like Apple and Tesla are being held responsible for the things happing in the mines but, maybe, would it be an idea to start at the bottom? To hold the mining company or the buyer of the raw material responsible?