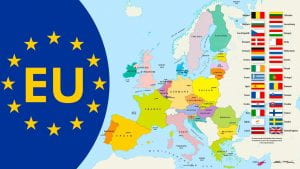 Covid-19 virus, corona virus, whatever you want to call it. I think at this stage I can say that everyone got hit by this virus directly or indirectly. A few months ago this was slightly different. It was basically China’s problem, and not the rest of the worlds’. It will not happen that quickly, but it was the other way around. Infections started rising, the numbers of death were increasing, and about two months later the virus was declared a pandemic. According to the World Health Organization a pandemic can be defined as the worldwide spread of a new disease (WHO, 2010). Who would have thought? Europe in any case did not. The (un)preparedness for a disaster causes the disaster they say right?

The impact that the virus had on my personal life was that I had to return to the Netherlands from studying in Bangkok. When I arrived at Amsterdam Airport Schiphol I was negatively surprised about the measures that were not taken at the airport. No one, except for me, was wearing mouthmasks, the person that checked my pasport at the pasport control did not wear gloves, there was no handsanitizer, my temperature was not checked. That was in contrast with were I came from, in Thailand you were not allowed to enter the airport without passing the temperature check, and in Abu Dhabi we were not allowed to leave the aircraft before being checked by a medical staff. These are just a few examples of measures I would have expected in the Netherlands and Europe because the countries in Europe already had more cases and the situation was more critical than in Thailand or the United Arab Emirates. But now we are here with the consequences of this virus and not taking early actions to prevent the spread of the virus.

And one of this consequences was an advert in the Frankfurter Allgemeine Zeitung. I can see you thinking, what has an advert in a German newspaper to do with the Covid-19 virus? This advert was written and signed by Italian Member of European Parliament Carlo Calenda and a list mayors and governors of Italian regions who were hit hard by the virus. The advert attacks the Netherlands and calls the country “an example of lack of ethics and solidarity”. In the advert the Italians try to convince Germany to stand by their side, and remind them of the cancellation of their debts after World War Two (Financial Times, 2020). A German MEP already responded to this saying that Italy should not let emotions involve. 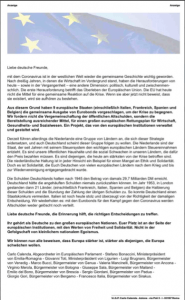 Italy is the third worst hit countries by the Covid-19 virus, after Spain and the United States. The country is in an entire lock down and their economy is collapsing. To save Italy and other southern European countries dealing with this humanitarian crisis, the European Union needs to come up with a solution. Italy advocates so called corona bonds or Eurobonds. A Eurobond is a joint loan by all countries in the European Union. For Italy this is beneficial because countries with a high government debt pay less interest for this loan than when they loan individually, but for other countries like the Netherlands a joint loan is not beneficial. And this is were it becomes interesting, because member states of the European Union have the agreement that the national government debt is not supposed to be higher than 60% of the Gross Domestic Product. This agreement is part of the Stability and growth pact and ensures stability of the European Monetary Union. The agreement makes sure that interest rates are not increasing due to the fact that a lot of countries have to loan money at the same time.

At least, this would be in the ideal situation where every country sticks to this agreement. Unfortunately but not surprising this is not the case, in fact the country that is now shouting the loudest for Eurobonds has the second highest national government debt in relation to their GDP of all countries in the European Union. Actually, the passed years a lot of countries within the European Union warned Italy for the negative consequences of their increasing national debt. The current Italian eurosceptical and nationalist governement sent a loud and clear message that they can take care of their own business and do not need the advice of other European countries. Now the same eurosceptical and nationalist parties turned 180 degrees and are emphasizing how important the cooperation of all countries within the European Union is, to survive this crisis. In a way they are right about the importance of cooperating in difficult times, but it is not fair to accuse a country as the Netherlands of being unethical and having a lack of solidarity. The Netherlands cut a lot of costs and the government made a lot of unpopular decisions but this was necessary to decrease their national debt. Now they are on a level that the national debt is underneath the 60 percent of the GDP and it is understandable that they are not going to pay high amounts of interest for Eurobonds because the Italian government was not willing to take unpopular actions to lower their national debt.

Of course Italy did not ask for this Covid-19 virus and the humanitarian crisis as consequence of this, but they should have foreseen the consequences of their increasing national debt before it was too late. It is kind of hypocritical of them to judge other member states for not showing solidarity and rely on the European Union. The member states are doing a lot to come up with a solution for the economic impacts of this crisis because a chain is only as strong as its weakest link, so they do not have a lot of other options than helping the worst hit countries. And being a member of the European Union means that you support your fellow member states especially in times of crisis because that is how the Union started. However next time Italy starts making demands and accusing others maybe they should first check their own reputation.