It does not matter whether you read the Bangkok Post, the Al Jazeera or the BBC – what we all can agree on is that the world is currently facing mass humanitarian crises. We read about the international system and the United Nations delusively striving for global peace. But will we be able to find a durable solution to humanitarian crises with the current national policies?

This is a story of the Rohingya, stateless, oppressed and nowhere to go.

Who is the Rohingya and why are they fleeing?
The Rohingya crisis has been an ongoing disaster for many years. The crisis was 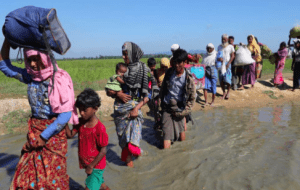 triggered by social and ethnic conflicts between the Rohingya Muslim minority group and the Buddhist Rakhine community, who were supported by the security forces of Myanmar.

These state military forces believe that they counter terrorism by suppressing the Rohingyas, and therefore they justify their actions (A state-led massacre triggers an exodus of Rohingyas from Myanmar, 2017). But what they actually do is violate human rights. They are responsible for burning villages, genocide, massacres and they have raped many women. With only one goal – ethnic cleansing. Not surprisingly, the Rohingyas are described as the most persecuted minority in the world (Barron, 2019). 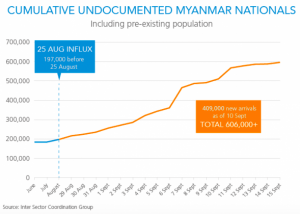 Can the discrimination towards the Rohingyas be compared to apartheid?
The answer is yes. International activists believe that discrimination towards the Rohingyas is similar to the African apartheid (Stoakes, 2014). The apartheid system classified the white ruling minority group as superior and other South-African people were mistreated and segregated on grounds of race (Apartheid, 2020). The similarities between apartheid and the oppression of the Rohingyas becomes painfully clear – considering the approach of Myanmar towards exclusion of citizenship for Muslim minority groups.

Myanmar does not recognize the Rohingyas as Burmese (citizens of Myanmar). Instead, Myanmar says that Rohingyas are illegal migrants from Bangladesh, given the Rohingyas religion that does not correspond to the Buddhist majority of Myanmar (Ajmera, n.d.)

What happened to the Rohingyas after they fled Myanmar?
Over the past eight years, hundreds of thousands Rohingyas fled their homes in the Northern part of the Rakhine ruled state in Myanmar (Dutta, 2017). They fled to neighboring country Bangladesh, yet statelessness and uncertainty are continuing problems once the Rohingyas reach Bangladesh. They do not have documents and the Rohingya woman fear sexual abuse and human trafficking. On top of all the misery, they face the absence of a legal base that should protect their rights (Life as a Rohingya woman in Bangladesh, 2016)

Pressure on humanitarian aid
The large inflow of refugees from Myanmar into Bangladesh resulted in pressure on the humanitarian aid system and assistance towards Rohingyas came at a halt. The Rohingyas were left vulnerable and had no other choice than to start walking the long way again, literally and figuratively, in search of safety. By boat the Rohingyas hoped to enter Muslim majority countries Malaysia and Indonesia – but their attempt to enter the country was in vain. 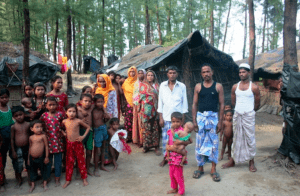 Why did the Rohingyas come to India?
India seemed to be the last hope, but this country does not bode well either.
The Rohingya refugees, who are not recognized at all by the Hindu Nationalist government, are tucked away in refugee camps in Assam, Jammu and Kashmir (Dutta, 2017). The crackdown on the Rohingyas is continued by Indian security forces in the refugee camps where Rohingyas shelter. India’s prime minister Narendra Modi says the Rohingyas form a threat to Hindu minorities living in those districts. Not only are the Rohingyas considered to form a threat to the Hindu minorities in Jammu and Kashmir, India believes the Rohingyas are a threat to the whole Indian national security system. The Indian government believes not to have any responsibility towards the Rohingyas, who are considered illegal immigrants, because the country has not ratified the 1951 Refugee Convention and its protocols (Werleman, 2019). 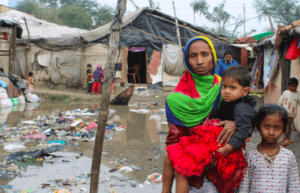 Rohingyas live under appalling conditions in refugee camps in India.

But if no one recognizes the Rohingyas, how can they threaten the national security system?
The Rohingyas are a minority in India who have no means of exercising power and there is little or no recognition for them. We could therefore say that the Rohingyas will not really pose a danger. However, to understand the current nationalist policies of India we need to take a look at history. The partition of India after independence in 1947 led to two different countries: present-day India, where a Hindu majority lives and Pakistan, which has a Muslim majority. Because of this event in history, the right-wing parties believe that Muslims no longer have a reason to be in India. To emphasize their ideology, the right-wing party spreads fake news and manipulate the Hindu population by exaggerating the number of Rohingya refugees in the country. Another important area is the Kashmir province, which is ruled for one-third by Pakistan and two-third by India. Kashmir recognizes a Muslim majority but is also home to Hindu nationals. That explains why India is so willing to acquire and keep a stake in Kashmir (Ayyub, 2019). The Modi government has recently set up two immigration checkpoints on the border with Myanmar and Bangladesh to monitor incoming refugee flows. The influxes of Rohingyas, they say, will result in a breeding ground for terrorism (Das, 2017).

If Muslims are not welcome in India, to what extend is the Indian state secular or influenced by religion?
Freedom of religion is a fundamental right adopted in the Constitution of India and India does not have a state religion. But despite the fact that India recognizes secularism, the religion and state in India is not separated (Jaffrelot, 2011). This means that the state can exercise power to meddle in religious affairs religion. The laws are also uneven depending on someone’s religious background. The Muslims live by Islamic law and the Hindu, Sikhs and Christian Indians have common law (Smith, 2015). The differences in laws within the borders of the country can violate the principle of equality before law, which states that each individual should be treated the same, regardless of religion (Dhume, 2010).

How does the Citizenship Act affect Rohingyas and Indian Muslims?
The recently adopted amendments on the Citizenship Act provides a path to Indian Citizenship for Non-Muslims from Pakistan, Bangladesh and Afghanistan. Not surprisingly, Modi’s government disregarded Citizenship for Muslims, instead they are considered illegal migrants and will not be able to count on help from the Indian government, even though this conflicts with the country’s obligation to pursue international laws regarding the protection of human rights for those fleeing war and persecution (Dhavan, 2020). As a result, the Rohingyas are back to square one – stateless, hopeless and fearing persecution 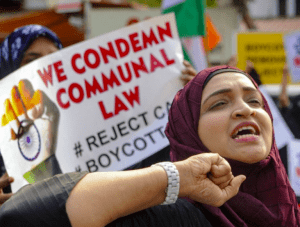 A woman is protesting against the Citizenship Act 2019 in Mumbai

A state-led massacre triggers an exodus of Rohingyas from Myanmar. (2017). Retrieved 6 April 2020, from https://www.economist.com/asia/2017/09/09/a-state-led-massacre-triggers-an-exodus-of-rohingyas-from-myanmar

Dhavan, R. (2020). The ICJ’s Ruling on the Rohingya and What It Means for India and the CAA. Retrieved 7 April 2020, from https://thewire.in/law/icj-ruling-rohingya-myanmar-caa-refugees

Life as a Rohingya woman in Bangladesh. (2016). Retrieved 4 April 2020, from https://www.bbc.com/news/av/world-asia-36301692/rohingya-women-tell-of-rape-and-trafficking-in-bangladesh