Refugees remain an important topic in today’s world, regardless if people want to take accountability for it. The inclusion of refugees has a grave impact on a country, not only on its culture, social surroundings or economy but also on its environment. As countries lack in accountability for refugees, it results in too many refugees ending up in developing countries which do not even have enough resources for themselves. This is why it becomes even more difficult for refugees to integrate into a new country, as they are often seen as a threat to the resources and environment of the country. Consequently, developing countries, such as Africa, are to be faced with the negative impacts on their water and health care systems, and their environment (Momodu, 2017). The Western countries should take more responsibility on the inclusion of refugees, thus releasing pressure on the developing countries.

Background information
Indeed, there are laws to which countries should obey. But first let’s begin with some basic information on this topic. It is important to define ”refugee” as it can have different explanations, but it ultimately comes down to an individual seeking for asylum in another country. Reasons for seeking asylum may differ per individual, but usually it is because of unbearable circumstances in their country of origin. As there are many refugees worldwide, currently 25.9 million, there are laws to protect them. This law is the International Refugee Law of which the Geneva Convention in 1951 is the base of. By this Convention, it was obligatory for people to recognize the right of individuals to seek asylum in that country, but it did not have worldwide handling yet. Later, during the 1967 Protocol it gave the Convention worldwide handling. Regarding Africa, it is a bit more complicated. The Convention Governing the Specific Aspects of Refugee Problems in Africa 1969, is the regional legal instrument used in the developing world for refugee protection and a regional addition to the 1951 Refugee Convention. Nevertheless, the International Refugee Law still shows us that UN-countries should help each other in this matter and should obey to these laws, but do they do so? No! Currently, a lot of countries are avoiding the responsibility.

How do refugees settle?
How refugees settle can differ, a refugee can be self-settled, organized settled via emergency relief camps or organized settled via agricultural settlements. When a refugee stays unregistered in a country, but does receive help from the country where they are staying, the refugee is self-settled. For the organized settlement the United Nations High Commissioner for Refugees (UNHCR) helps by emergency camps. The UNHCR together with the specific government sets up these camps, with the intention of being a temporary help for the refugee. Yet, these camps often do become permanent homes for many refugees even though the surroundings are not made for the permanent stay of them. Still, this type of settlement is often used. The solution of agricultural settlements was set up in 1960s by UNHCR and governments, providing a substitute to camps. This type is most beneficial for both parties because it: 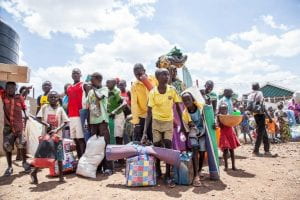 In Africa, the settlements of refugees usually happen close to a national park or an area that is easily disturbed by large groups (of for example refugees). Places that refugees are settling in for a period of time aren’t environmentally friendly ones, but big camps that destroy the environment, sometimes being irreversible (Shepherd, 1995). There are quite a lot of places in the EU for refugees, but there aren’t any ‘AZC’s’ (asylum seekers center) in Africa since there is no fund for this and it is not made for a country as Africa, where infrastructure is still relatively behind on the Western world.  Of course, people still argue that with these camps damaged to the surroundings is being controlled. One of these people is Jacobsen (1997), in her study it is also claimed that with by these camps refugees won’t feel the need to go to the local surrounds and seek for their resources there, as they are given food, firewood and water. However, don’t we all know that providing water, food and firewood can take a long time? Especially in a country like Africa. Thus, refugees do (feel the) need to go outside of their camp anyway, leading to damaged surroundings and a sudden, rapid decrease in the resources of the host community.

Sure, there might be camps that are able to provide these things on time, but so many on the other hand do not. This results in grave negative impact on the environment of the host country.

“Evidence shows that large-scale dislocation of people, characteristic of many recent refugee crises, can create adverse environmental impacts. The scale and suddenness of refugee flows can rapidly change a situation of relative abundance of local resources to one of acute scarcity” (Engineering, 2005: 3). 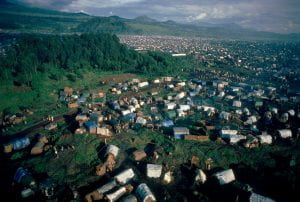 You might think that this is all exaggerated, but let’s look at an example of an area that has been affected by refugees: Virunga National Park. From this example it can be seen that refugees really do have an immense impact on the surroundings, especially when the area is not made for so many people at one place. The number of refugee arrivals in the Virunga National Park was immense, so consequently the park has suffered a lot of damage such as deforestation and poaching (UNESCO, 1995). Hence, the park has been included in the List of World Heritage in Danger in 1994, after refugees had been living in the area. Again, Africa does not have the ability to deal which such a high number of refugees in one area, but yet it has no choice and the environment suffers from it.

An example of refugee inclusion in Tanzania
The inclusion of refugees leads to having a relationship with the host communities, regardless if this is positive or negative. Refugees bring changes to these host communities, some positive such as economic growth or that more projects get funded by aid organizations. A part of Africa that has had (actually still has many Burundian refugees) many refugees is Tanzania, a total of 602.008 refugees lived there by the end of 2005, most in camps set up by the UNHCR. Here, there is a clear difference between the refugee and host communities which means that the refugees do not define themselves as integrated in the local community (Berry, 2008). 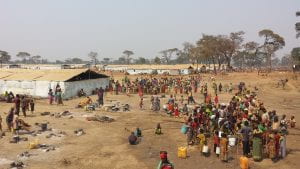 But what is the reason for this separation between refugees and locals? This always depends on the host countries and also cultures of refugees living in the country, but let me talk about a few significant factors referring back to Africa:

Economic development is considered to be one of the greatest impacts on the relationship, because the relationship between a refugee and a host community is seen as a secondary objective and as a normal result from successful economic development in the particular area. This is exactly where the problem lies within the inclusion of refugees: only the economic development is considered as important, leaving social relations and cultural exchange behind. This is where it goes wrong and the isolation and separation of the refugees start.  A good example of this issue is the study of Berry (2008), she found that when questions were asked to Africans about the environmental problems, refugees are commonly blamed for the degradation without her mentioning anything related to refugees.

What is the role of the UN?
From my point of view, the UN Security Council has to carry on the encouragement of respect towards the international laws relating to refugees, such as the International Refugee Law. It has an important role in doing so and in continuing to support the host countries in financial ways. Lastly, the UN should remove the barriers that make it more difficult, or even impossible, for refugees from working which means that they never get a fair chance in integrating.

From all this, it can be stated that when an area experiences such a sudden increase in population, resources and environment are consequently to be affected negatively. Africa is not the country to take as many refugees as it is currently doing, as it increases the negative factors in the country. The water-quality, the wood, the healthcare system are all not build for the amount of refugees currently there. It is crucial for humanitarian agencies to address these issues and for Western countries to step up their game.