Do not believe in war, and it will go away. That is what your parents told you when you believed there was a monster under your bed, right? But can you also just close your eyes and don’t believe when it comes to a huge war?

What started as a great intention and beginning of a new life, the Arab spring in Syria went upside down. The war is now going on for more than eight years. In these last eight years, 370 thousand Syrian people have died during the Syrian civil war, with hundreds of thousands more wounded. The fact that this sort of things are still happening in 2019, is devastating don’t you think? Like so many people are affected by this humanitarian crisis that it is undeniable that there is a huge need of intervention. Even people are so done with the suffering this war has caused, that they even are searching on the internet about when it will be over or what is needed to stop this ongoing process. But actually it seems that no one really knows the answer. It seems that Syria is trapped as a mouse between different fields and doesn’t know the way out.

So the only real thing we can rely on is the basic thing that our parents taught us when there is a danger occurring in our space: when you don’t believe in it, it will go away.

In the context of the Syrian war, this doesn’t mean that you are turning your head away from the fact that people are dying, but in this context, it means believing in the peace. Nevertheless according to the law of attraction, you attract what you believe. So why don’t you believe in peace? 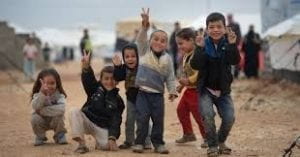 By looking at what initiatives Canada has, you could say that they are an actual representation of what this believe looks like. With only 31 million people living in their country, they accept approximately 30,000 refugees a year. Even though this has a huge impact on their economic and social structure. The refugee problem from Syria has led to a global issue and many countries don’t dare to do the same as Canada because they are afraid of the negative outcomes.

Even though, according to the UNHCR, there are many positive sides on accepting refugees. For example: From the moment of arrival, refugees compete with the local citizens for scarce resources such as land, water, housing, food and medical services. Over time, their presence leads to more substantial demands on natural resources, education and health facilities, energy, transportation, social services and employment. They may cause inflationary pressures on prices and depress wages. In some instances, they can significantly alter the flow of goods and services within the society as a whole and their presence may have implications for the host country’s balance of payment and undermine structural adjustment initiatives. On the other hand, refugees can bring assets to the hosting area. Refugees indeed bring skills and knowledge with them that can be utilized to the benefit of local people. These skills vary, but do often include those of the more educated group, such as health professionals and teachers, who, even in limited numbers, can make a significant contribution in remote areas. An additional range of skills that can be brought by refugees may include an enterprise culture which can stimulate the local economy or offer innovative agricultural techniques previously unknown to the host areas

Canada believes in these positive effects and would like to contribute to them. In “Operation Syrian Refugees” Canada worked over the span of 100 days together with non-governmental organizations, sponsors and provincial, territorial, municipal governments and international partners to accept more than 25,000 refugees. The fact that they are putting their hearts out for helping other people, confirms the positive thinking strategy.

Furthermore Canada developed a E-learning for Peacekeepers project. This is an online training on gender equality, the role of women, human rights and international conflict resolutions to: military personnel, police, and civilians serving in all peacekeeping missions.

This proves that empowering people yields more than banning refugees and sending troops to the war zones. Because why would you fight the war by fighting it? With fighting you kill more people, and keep the imbalance of the country in life. The government would even feel more attacked and send more troops and kill more people to compensate the incoming other troops. Instead of this, you can focus on the capacity of people within the war prone community and focus on peace keeping.

Like for example by social empowerment. By empowering people you focus on the process of humans of becoming stronger and more confident, especially in controlling one’s life and claiming one’s rights. This means that you see their potential, facilitate them and help them becoming their best version. Canada proves they are doing this by welcoming and facilitating them. Canada has given big-heartedly to the numerous international efforts to help the Syrian people, including those living as refugees in nearby countries. To date, Canada has dedicated over $1 billion in humanitarian, development and security assistance in response to the Syria crisis. To help address the protracted and tragic crises in the region, Canada focusses on meeting the basic needs of those most impacted by the conflicts in Iraq and Syria, including refugees who have fled to neighboring countries.

This help was so much needed because over 5.5 million Syrians have sought refuge in the neighboring countries of Egypt, Iraq, Jordan, Lebanon, and Turkey. Thousands more have made the harrowing journey to Europe in search of a better life.

So in conclusion, and as you can read, the jokes about Canadians being the nicest people could be true. Because which other country can say that the only involvement they have in war, is protecting the peace and the people?

But you know, maybe in one way every country contributes to war. Because at the end of the day the whole world is a system that needs to stay alive. This system sometimes urges to fall on a side to stay alive on the other side. Like the Arab spring. But who says and when is it ok to judge this way of falling and tell what is right or not? As in the end everything is only perception. However the only thing you do can admit is that war and hurting people never helps, and that by focusing on the good things, good things will come to you.