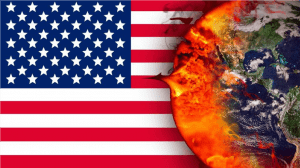 Metropolitan regions and cities are very dependent, therefore, they are never sustainable, furthermore, people who live in cities and economic activities that partake in cities are dependent on environmental resources and services from the countryside. A key goal in making cities more sustainable Is reducing energy and material use, thus reducing the ecological footprint, which is the measurement of human dependency on human nature. Therefore, sustainable urbanization focuses on promoting long-term viability of cities by minimizing waste, consumption and harmful impacts on people residing in metropolitan regions and environment while enhancing the overall wellbeing of both the environment and people. Wellbeing includes the ecological, physical, social, health, economic and equity factors that comprise cities and their populations.

With regards to economic aspect of Sustainable urbanisation, U.S is doing very well, most cities in the us are attracting tourists and businesses. The cities in the U.S are world’s largest stock exchange, the cities unrivaled ease of engaging in business and the healthy economic development boosts the city’s status as a global financial leader. However, with regards to social aspect, the majority of the population struggle with income inequality and affordability. Most cities in the U.S are tech hubs which advocate for digital implementation. Most citizens rests in the city’s data-driven service economy and automation capabilities. Residents experience public transportation linked to mobile apps that enables them to easily access, rate, pay and track their transit options. However, according to the social aspect this decreases employment scoreswithin the cities.

A question that must be going through your heads right now is what happens if the environment aspect of sustainable urbanization is not promoted? The climate around and in cities and metropolitan regions is changed due to modifications human create to the surface of the Earth during urbanization. The surface in cities is often drier and typically rougher, as paved streets and buildings replace natural vegetated surfaces. The frequency of storm surges and torrential rain is on the rise in densely populated, big cities like New York, Jakarta and Mumbai, these events mostly affect those living in marginalised, informal residents like slums the hardest. Desertification – fertile land becoming a desert – destroys farmable land needed to feed rising urban populations. And sea level rise threatens everyone living in coastal areas, delta regions, and small-island countries. This is evident in the U.S as floods have hit U.S coastal cities three to nine times more frequently than they did 50 years ago. Sea level rise cost eight coastal states $14.1 billion from 2005 to 2017. Another study showed that in 27 U.S locations the number of coastal flood days has increased dramatically. These locations flooded 2.1 days /year between 1956 and 1960. That has escalated to 11.8 days annually between 2006 and 2010.

The above facts are just a minority of what climate change imposes. Yet President Donald Trump still thinks climate change is a “hoax” according to his words.I mean how ignorant can one be?  The world’s top climate scientists warned that the world hardly has more than a decade to extremely cut global carbon emissions, to prevent dealing with the worst consequences of the climate crisis such as food shortages, wildfires droughts impacting hundreds of millions of people. But no, President Donald Trump chooses to ignore scientists and he claims that U.S has one of “the cleanest climates there are” and blames India, Russia and China for worsening water and air quality. So does this mean he does believe in the quality of water and air worsening but he does not want to takeaccountability for his actions? How can that be? when U.S Industry has omitted more than 22 percent greenhouse gas emissions, industry greenhouse gas emissions primarily come from burning fossil fuels for energy, as well as greenhouse gas emissions from certain chemical reactions necessary to produce goods from raw materials. 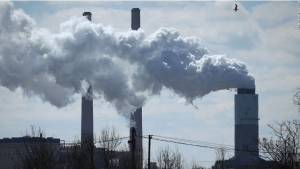 Trump has made major declineson regulations designed to limit global warming this shows that he has worked to erase a cornerstone of President Barack Obama’s legacy.He promised to pull US back on the landmark Paris climate accord (an agreement where countries pledged to cut down on greenhouse gas emissions to fulfil a long-term temperature goal which is to maintain the increase in global average temperature below 2°C above pre-industrial levels; and to strive for efforts to further limit the increase to 1.5°C.) and this is expected to happen by 2020. Trump has also weakened restrictions on power plant emissions and he is determined to remove many of the guardrails installed by the Obama administration to limit the emissions of greenhouse gases. Trump has already built an environmental legacy that will be felt by generations to come, regardless of the events following the 2020 presidential elections. This is a matter of concern, not only we will face histories worst disasters, industries too will collapse because they are dependent on these depleting natural resources. If there is no industries, there will be no jobs, this equals long-term poverty!!!

To assist with the struggling coal industry and to boost electrical utilities, Trump has replaced Obama’s Clean Power Plan (CPP), this could have serious consequences for the health of the planet and humans.

The CPP set out flexible limits on power plant carbon dioxide emissions, and according to an analysis by Obama’s EPA (Environmental Protection Agency), between 2005 and 2030 this plan would have reduced CO2 emissions from power generators by 32 percent. 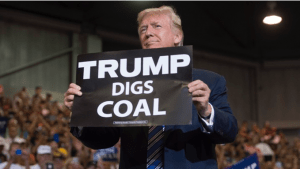 President Trump replaced the CPP with an Affordable Clean Energy rule which allows states to place their own emission standards for coal-fuelled power plants. Andrew Wheeler, EPA Administrator, endorsed the plan, saying it gives power companies “the regulatory certainty they need to continue to reduce emissions and provide affordable and reliable energy for all Americans coal.” However, the new rule could cost American lives.By EPA’s own analysis, President Trump’s rule could result in 1,400 more premature deaths by 2030 than under the CPP.At a time when the US has become the world’s biggest natural gas and oil producer, President Donald Trump’s EPA proclaimed that it will stop requiring oil and gas companies to install monitors that detect methane leaks from new tanks, wells and pipelines.This action is significant because of the power of methane’s heat trapping capabilities. Although the gas doesn’t last in the atmosphere compared carbon dioxide, one ton of methane is 84 to 87 times more likely to warm the globe than the same amount of carbon dioxide over a 20-year period.

Earlier this year, another key global agreement to reduce global warming gases went into effect, but Trump has yet to forward it to the Senate to approve it.

The treaty is called the Kigali Amendment, and it deals with a very potent class of greenhouse gases called hydrofluorocarbons (HFCs), which are utilized in air conditioners and refrigerators. These gases are unfamiliar and sometimes called “super greenhouse gases” because of their capacity to trap large amounts of heat in the air – they have more than 1,000 times greater warming potential compared to carbon dioxide. Project Drawdown -the climate change solutions organization- has found that draining away these chemicals would be a significant impactful solution to stop global warming, more than switching to renewable energy, eating less meat or driving electric cars.

California and several other states have sued to block the change, and there are signs that even some automakers are not on board with Trump’s rollbacks.

U.S citizens that disagree with what Trump is doing say that, beyond his dangerous rejection of science, he’s declining a chance for the U.S to be an industry leader on renewable, solar and wind energies. “By setting up barriers to the necessary transformation to a low-carbon global economy, President Trump is leaving economic opportunities and new jobs up for grabs to other nations in addition, he is making American businesses less competitive.

I am eager to know what you think of this article. Submit a letter to the author at www.annitazolelwabekwa@gmail.com