“India?! Isn’t that quite dangerous…? Especially for a girl.”

How I experienced India

While preparing for my last internship I must have heard this sentence or variations of it hundreds of times. I was leaving for India to teach at a school for eight weeks and while I was worrying about getting my visa in time, everyone else seemed to be worried as well.
Worried about what I will have to face. Worried about what will happen to me.
Worried about my safety.
Of course I was aware that the situation for women in India is anything but perfect, with women facing violence as well as cultural and structural discrimination on an everyday basis. However I decided to keep an open mind and to take things as they come. So I soon developed a script in my head, which I would use to calm down family and friends: “I won’t be alone! There are four other students going with me and one of them is a boy, so if push comes to shove we’ll just stick to him. And we are going to a international boarding school, so we’ll most likely life in a bubble anyway and only be exposed to a polished and westernized version of India”.

In the end, this proved to be completely true. Throughout my time in India I not once faced a situation I felt uncomfortable in, because of my gender.
I was treated with respect by all the male colleagues and staff, me and my female peers would get the same treatment as our male classmate and to be frank: I had never felt quite as safe – in every sense – as I did during that internship.

In all honesty, I was never quite sure which of these treatments and behaviours could be traced back to our White Privilege or our status as guests, and to what degree these treatments and behaviours were part of the universal code of conduct within the school.
Either way the polished, westernized bubble was real! We had entered and experienced the sub-continent of India through a highly privileged lens, which sheltered us from everything that might not be that beautiful. 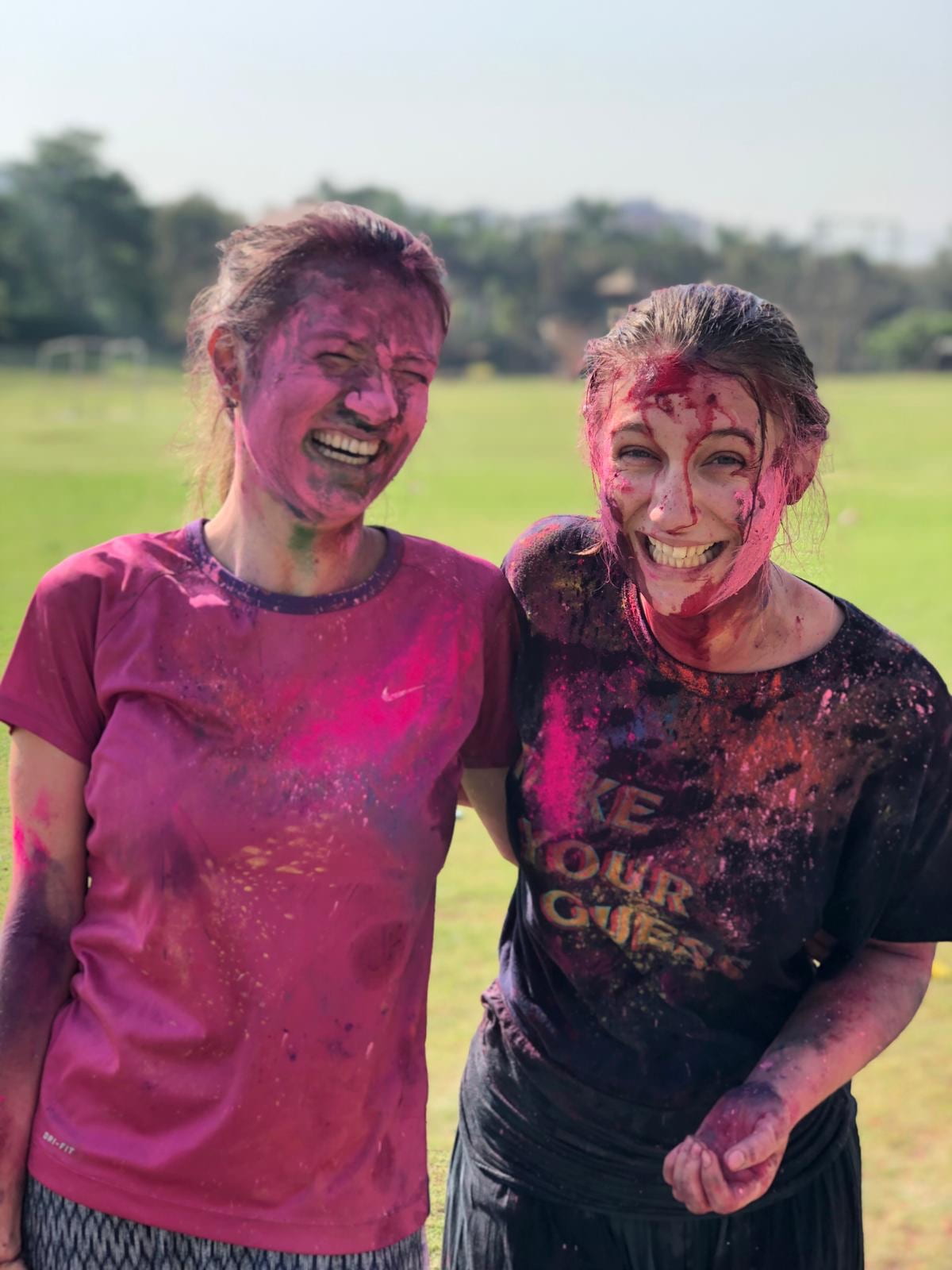 Discovering Indian traditions such as Holi

Yet, if one was attentive and listened, this facade would begin to crumble, because while it wasn’t happening right in front of us, it was happening and the stories of it were told everywhere.
So, I heard stories of women, who had no choice of their own and had to get permission from their husbands for everything.
I heard stories of women and girls, to whom domestic violence was a normal part of their everyday life.
I heard stories of baby girls, who would be killed, because having a girl means having expenses, while boys enable the growth of wealth.
So after all, out of sight did not equal out of mind.

These stories painted a different picture of women and their role in India – a more accurate one. According to the 2015 “Crimes of India” report by the National Crime Records Bureau, the overall rate of crimes against women in India has been continuously increasing for years now, despite the efforts of the Ministry for Women and Child Development to empower women.

The Indian constitution, insists on gender equality. It includes multiple articles that define prohibited and valued behaviours towards women, such as equality, no discrimination on the basis of sex and equal opportunities, all basic women’s rights – human rights, really.
There has been undeniable progress in the legal sector with laws like the Domestic Violence Act (2005), the Prohibition of Child Marriage Act (2006) and the Sexual Harassment of Women at Work Place Act (2013) coming through. However – looking at the dates – this seems to have come to a halt, even though the struggles of women continue. 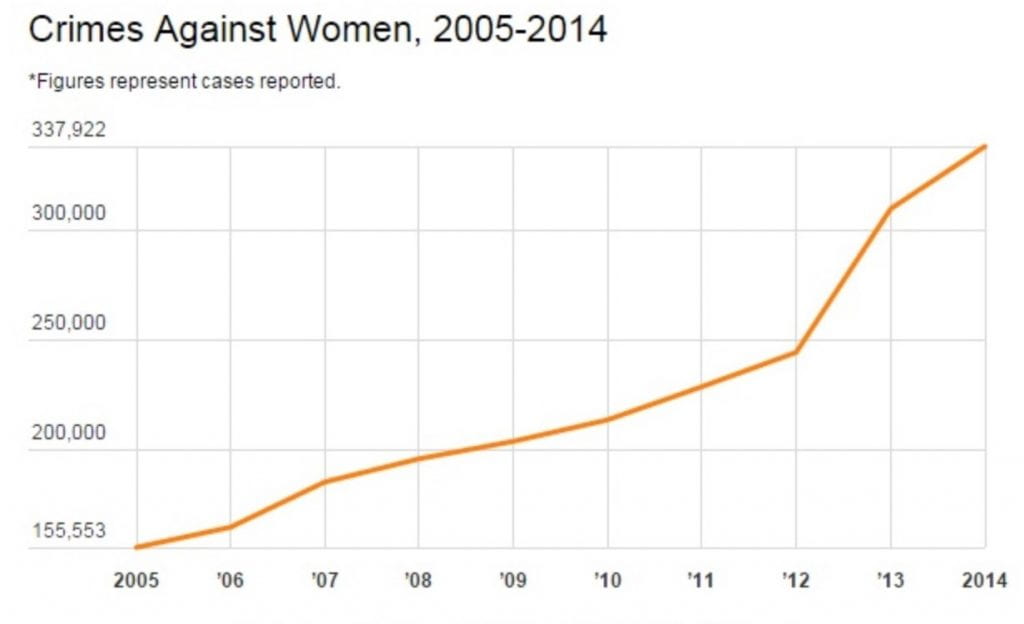 The development of crimes against women in India 2005-2014 (Retrieved from https://scroll.in/article/753496/crimes-against-women-reported-every-two-minutes-in-india)

Moreover, there is a huge body of international humanitarian organizations at play in India. Each having noticed the challenges women in India are facing and wanting to help and empower them, in order to improve the situation for generations to come.

With so many players working towards women’s empowerment, with treaties being gratified, laws being passed and actions being taken, why are the numbers of crimes against women still going up? In theory they should be going down, yet a disconnect has overtaken women’s empowerment in India. A disconnect between women’s right laws, actions to ensure these and the actual practices. A disconnect between theory and praxis. But why is this?

The disconnect of Theory and Praxis

In an attempt to answer this question I would like to go back to my story from the beginning:
Like I said overall we were five students, who did an internship at an international school – one boy and four girls. While my friend and I very much enjoyed the whole experience, the other two girls would tell a totally different side of the story above. Regularly we would talk about what was happening around us and often they would tell stories of how uncomfortable they felt in a certain situation. Nothing bad ever actually happened to them, but in each conversation you could sense the fear and expectation that something bad was always lurking around the corner.

So why did we have these completely different experiences, even though effectively we were exposed to the same situation? I believe it comes down to personal believes and expectations – basically one’s attitude.
Even though I acknowledged the warnings of my family and friends, I also took everything they had said with a grain of salt. Moreover I also clung to stories of a friend, who went to India as an exchange student and fell in love with the country. I did not allow myself to judge a country on stories only, without ever having experienced it first-hand. I kept an open-mind and understood these stories as a warning, but more than anything else a stereotype.

So where does this connect to women’s empowerment in India? And how does it explain the disconnect?
Apparently, there is a certain ‘Indian attitude’ towards women, an attitude that is known beyond its borders, all the way to university students in Europe. And this attitude is undeniably present in the Indian society, which shouldn’t come as a surprise looking at India in the broader context. India is an ancient country, whose values, traditions, customs and believes not only go back centuries, but also project a somewhat marginalizing view of women.

This ‘Indian attitude’ towards women has been years in the making and to change one’s attitude after years, decades, even centuries of cultural conditioning is not an easy task. And I believe looking at the current situation of women’s empowerment in India this is what we should focus on – the collective, marginalizing mentality towards women. This mentality is the reason for the disconnect of theory and praxis.

What to do for women in India?

For this reason I think it is naïve to believe that just creating laws will bring any lasting change, because, if the collective consciousness does not believe in the cause behind them, no one will follow let alone enforce them. Just like my peers, who would question every kind gesture from a man during the internship, because they could not let go of their attitude towards Indian men.
Instead we should focus on changing this collective consciousness for the better, towards the value of women and girls, towards their strengths and abilities, towards women’s empowerment as a whole.

The North East Network (NEN) is a women’s rights organisation, which is dedicated to achieve just that: a collective social change, which enables women’s empowerment in India.

Therefore I believe the best thing we can do for the women’s empowerment in India is to support humanitarian organisations, whose primary focus is to change the Indian attitude towards women.

I believe the school I interned at is prove that this can be achieved and the impact it can have. The school’s student body was to 90% Indian and all the teachers were Indian, yet women were appreciated and valued. Actually I would even describe all the staff as feminists and their students reflected these values back. I remember more than one conversation about women’s rights I had with students, they would criticise the current situation, their parents attitude towards the topic and the lack of governmental involvement.

And – more than anything else – it was these conversations and the change in attitude the students portrayed compared to their parents and grandparents what gave me hope for the future of women’s empowerment in India.

Chaitanya, M. (2015). Crimes against women reported every two minutes in India. Retrieved on November 5, 2019, from https://scroll.in/article/753496/crimes-against-women-reported-every-two-minutes-in-india

North East Network. (2019). About Us. Retrieved on November 6, 2019, from http://northeastnetwork.org/nen-vision-mission/