09 October, Ras Al-Ayn. Turkish soldiers set foot in Ras al-Ayn, Syria with help of some Arabic soldiers. Ras al-Ayn is a border city in the northeast of Syria. Within days, Turkey occupied the area around Ras al-Ayn. It took Turkey just a few days to occupy most of the Kurdish areas in the North of Syria. Turkey acted really fast so Putin, Trump & Assad are trying to remove some of the pressure on Syrian areas now.

Why did Turkey invade Syria? Why does Erdogan want to be in Syria? What interests does Erdogan have in this ‘new’ war? Will this invasion of Turkey start a new war? This blog will explain all these questions. 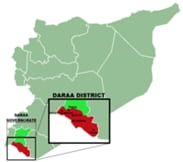 How did the Syrian civil war start?

Daraa, Syria, 2011. A few boys painted texts against president Bashar-Al Assad on a wall. These boys were arrested and no one saw them ever again. People started to complain and asked about these boys. Although very small, this can be seen as the beginning of the big protests that led to the war in Syria nowadays.

The protests that started in Daraa got so big that Assad started using the army to put down all the protests. Assad pulled all the policeman of the streets and started using the military instead. The number of deaths increased fast after Assad started using the army. Because of the rising number of deaths, more and more people started to protest against Assad. Assad tried to implement reforms to satisfy the people in Syria, but the Syrian army put down the protest harder and in a more cruel way than governments in other countries and because of the media people noticed that this was different than in other countries. People did not look at the reforms anymore and they kept getting more and more angry about the Assad regime.

With the establishment of the Free Syrian Army in 2011, the civil war started. From this point on, there was an army against Assad that was organized. This made it a strong opposition to Assad´s army. 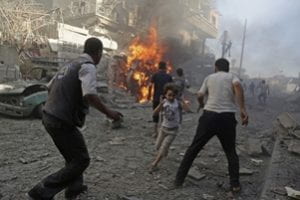 So, what is Turkey doing with this conflict in Syria? Turkey shares his longest border with Syria. Throughout history, Turkey and Syria have always had disputes and conflicts with each other. For example, the water politics of Turkey caused problems because the way Turkey wanted to arrange better water supply made sure that Syria would lose a lot of water. Syria also supports the Kurdish workers party (PKK), but Turkey sees the PKK as a terrorist organisation. These two examples are just a few of the disputes and conflicts that Turkey and Syria have been having through history. These disputes are not big and definitely not big enough to start a war between the two countries, but it shows that Turkey and Syria are not really good friends.

Nowadays, Turkey has the biggest amounts of refugees in the region. All these refugees in Turkey caused a huge economic crisis in the country. Erdogan had to do something and beside this, Turkey hates the Kurds since the beginning of time. These facts show that Turkey has mostly ethnical reasons to invade Syria. Before Turkey invaded Syria, Erdogan has repeatedly threatened military action in northeast Syria, where the Kurds have established a relatively stable region during the Syrian civil war. Turkey fears that Syrian Kurdish profits will encourage the Turkish Kurds to create a PKK-state on its border. The combined military, political and territorial strengths of the Syrian Kurds give them a huge amount of bargaining power in any political solution in Syria. They are demanding recognition of Kurdish rights and decentralization of state power. Taking the hate against the Kurds and the fear of a Kurdish state into account, it is not that weird that Turkey wants to push away the Kurds from the Turkish-Syrian border. 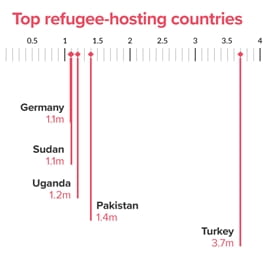 What is the future going to bring us?

This story is a story that keeps continuing and this story keeps changing. Every day something changes. A new deal is made, or a new invasion is being started. This blog is written on 7 November 2019 and the latest news on this date is that Turkey’s President Recep Tayyip Erdogan has said that joint Turkish-Russian patrols in northeast Syria will begin soon[1]. Just a few hours ago, news about a meeting between Turkey and the United States of America was announced[2]. This meeting between Ankara and Washington could be really interesting, because Putin joined the conversation about this Syrian war. Putin made sure that Russia had reason to help Assad out with this conflict and with this helping hand from Russia, Putin made sure that Russia has gotten more power in the Middle East.

So, what is the future going to bring us then? No one can predict the future (at least I cannot), but looking at these meetings between Russia, Turkey and the United States of America it looks like this Syrian war is coming to a final end. Would that be possible? The Syrian war, finally over?

Of course, there is also the other scenario, that these three countries are getting mad and angry at each other again and a new war may start. The most important issue to keep in mind with these scenarios is that fighting ISIS/ISIL/Daesh/IS is still a big issue in this area. With the withdrawal of American troops, the Kurdish troops who were guarding ISIS prisoners had to leave the area to fight Turkey. That caused the escape of a lot IS prisoners in the area and far from all these ISIS prisoners have been found again.

That could be the other scenario. These countries who have been fighting in Syria can agree on everything and then make a lot of deals to keep all the countries happy, but if ISIS is going to attack again, chaos will happen.

So, what do you think? Will it become possible for Turkey and Syria to live in peace together? Or will Putin have to say something about it? And what about Assad? Did he win this Syrian war? Or did Russia win this war? Then there is still ISIS. What will ISIS do in the meantime?