BLOG: How should Germany deal with its IS-returnees?

The tents are burning down, flames are blazing, and dark smoke rises from the Camp of Ain Issa. In the north of the Syrian warzone, where the Kurds are now in control, are living approximately 13 thousand refugees, some presumably adherent to Daesh, or IS. This is probably the largest anti-terrorism challenge that Europe is facing since the founding of the European Union. To note is that the European members aren’t taking any responsibility since the start of the Syrian War, yet they try to find a back-up policy.

Now that Donald Trump has decided to stop taking part in the Syria War, the Turkish government has come into action and started a new offensive in the Northern region of Syria. For Europe, this means the situation could be more detrimental than what it already was, as the Turkish military is fighting the minority of the Kurds in that region and might take over camps such as camp Ain Issa.

In Europe, returning combatants from Syria and Iraq haven’t been welcome to return since t

he attacks on the satirical French weekly paper, Charlie Hebdo, in the cap 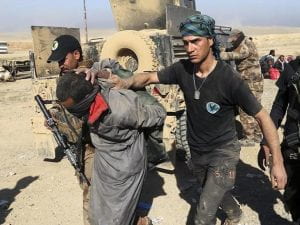 ital of France. As by now, not a lot of fighters have re-established in Europe over the past few years, however, the concern of returnees remains pertinent as almost every government is considering on how to deal with this major issue, for example, whether to repatriate them or not. The governments of France, the Netherlands, Belgium and Germany are very cautious in taking back these foreign terrorist fighters, the Dutch Prime Minister, Mark Rutte, even stated that the Dutch Jihad combatants who travel to the Syrian front should rather die there than returning to the Netherlands.

In Germany, the discussion is both politic and judicial. The German politics is heavily debating on this matter of IS-fighters with a German passport. The National Affairs minister of Lower Saxony, Boris Pistorius (SPD), expresses that violators of crime should have a fair trial in Germany, whereas Thorsten Frei, vice president of the CDU, mentioned that IS-combatants are a substantial risk to the state and that they will not welcome them back. The Chancellor of state, Angela Merkel, does not really want to speak out directly of this matter. According to Die Welt, Merkel urged Reccep Tayip Erdogan from Turkey to stop the Turkish offensive on the Kurds in the northern part of Syria. German newspapers believe Merkel’s statement was put forward because of the scenario that a lot of IS-captives can flee from the Kurdish prisons in the north of Syria and travel back to Europe.

Purely focused on justice, every German citizen has the right to return to their home country, even if they are suspected of battling pro-IS. However, in the case of Syria, even if they can identify as true German citizens themselves, there is no German consulate to honour their request.

A membership of a terrorist group like IS, is punishable in Germany. Even if they operate outside

the borders of the German state. What is also punishable by law since 2015, is to prepare a trip to terrorist areas like the caliphate. A well-known example of this is Nils D. In 2016 he was held responsible for the membership of IS by the tribunal in Dusseldorf and was prosecuted for 4.5 years in German jail. In the beginning July 2018, there was more evidence against the terrorist, he is now held responsible for triple murder in the Caliphate in 2014.

How do you avoid foreign terrorist fighters from being a potential danger of society?

Many German IS captives state that they got rid of the membership and ideology of IS. This is a statement the German authorities have their doubts about. Therefore, the Ministry of National Affairs has expressed that there should be an individual and fundamental check on each and every prisoner. On this matter, experts say that it is easier to deradicalize these Muslims in a safe haven like Western Europe than in war areas such as Syria at the moment. It is very important to monitor and control the social reintegration of these men and women. Ideal it would be to place these ex-fighters into their original homes and families, if these environments would still accept their lost family member.

What about the kids?

In most situations, the IS-combatants report themselves alone, without any a wife or children. It happens just by occasion that there is a report of a whole family. Or, if often happens that a mother with her child report themselves and say the that their husband disappeared and then, when the application is done, the husband suddenly shows up. That’s what you call a coincidence right? Anyway, what to do with the parents is one part of the discussion, but how to deal with these harmed and disillusioned children? It touches the heart in many ways that the children of IS-combatants live in these detrimental situations. They are minors and have nothing to do with the actions of their parents.

In Germany, there has been a long discussion on taking in children from the IS caliphate. Experts say that children which are growing up in warzones, develop traumas. These infants suffer from fear and a lack of self-reflection and empathy. With these characteristics there is an increased chance of becoming criminal yourself. These experts also pointed out that no reason to think that the minds of the children, coming from a radicalised environment, can’t be positively influenced.
The German government first acted passively by stating that here are no German officials in the appointed area. Nonetheless, in July 2019, the Bundesverwaltungsgericht in Berlin stated that the government is obliged to take in minor family members of IS-fighters. According to the Rojava Information Centre, a Kurdish refugee centre, there are 117 German minors located.

A dilemma in this situation that rises is the separation of the parents and children. An often-heard argument is that this is not in line with international law and that there should be a constructively good reason to take a kid from his or her parents. Another risk is that returning these children is irreversible and when they are not integrating in the community, there might occur harmful problems in the future.

What should the government do?

This is a question that cannot be answered directly and should happen step by step. This pragmatic way of responding will increase the security levels that Germany, and the western European states demand. The first step should be an international action to rescue all minor children living in miserable conditions, at any cost. These children should be given a home where they can get used to their new environment. What is needed, is that these children need to be integrated in society as soon as possible, the best outcome for this is school. What should happen simultaneously and behind the scenes, is that these children will be monitored by professionals to prevent any form Salafism.

Concerning the German adults, men or women, shall experience an exhaustive investigation for the sake of a fair court trial within the German borders. It is necessary to have the facts on the German table, because if you shut your eyes for what has happened, you will never ever know the real stories.