This is the 8th year since the beginning of Syrian war, which started when citizens protested for reforms of Assad policies and the release of political prisoners. The government responded with a barrel of a gun, since then the civil war has escalated and become more complex with various international actors (with different interest) getting involved. Millions of people have died, displaced and homeless and the number is still growing. It is on those grounds that we embark on a Peace plan for Syria, a peace that will advance the interest and will of people.

Before we display the importance of this mechanism, it will be significant for us to outline brief history of this agreement, subsequently to that then show its effect in utilising it towards peaceful Syria. After many years of a border conflict, Turkey and Syria signed an agreement in the Turkish city of Adana in 1998 that calmed tension that brought the two nations to the edge of war. Historians demonstrate that the bitter relations between these states emerge after the collapse of the Ottoman Empire at the end of WW1 about the border between Syria (which was part of empire and Turkey its successor.

The Adana agreement was a product of joint efforts by Egypt and Iran and satisfied Turkish demands that Syria must abolish its continuous support for PKK and categorise such as “terrorist” organisation, which led to Damascus banishing Abdullah Ocalan from Syria.

Furthermore, the agreement also stated that each country will abandon the military exercises that might jeopardise one of the country. The agreement has been in force up until the outbreak of 2011 war, when Ankara steadfastly called for Assad to step-down, which resulted to the breakdown of diplomatic relations.

However, the recent developments with the help of Moscow has resuscitated the relations between the Damascus and Ankara, as Turkey agreed that any rapprochement should be based on the Adana agreement.

In their 10-point plan memorandum, clause 4, they have cemented the importance of recognising the sovereignty and integrity of Syria, which means that the Turkey government which did not acknowledge Assad regime since the outbreak of war will now respect it and negotiate it when needed for a political solution. This is important as it might lead us to the negotiating table between these governments and pave the way to peace. Part of the agreement was that Russia will facilitate the process, we on the other hand argue that in order for this agreement to be legitimate the UN secretary General must be the neutral chief facilitator for this process as Moscow might be biased as they have interest. Our fear is the disagreement that might arise due to Russia who might dictate the terms and conditions on their favourable side.

THE CURRENT ISSUE OF SAFE-ZONE 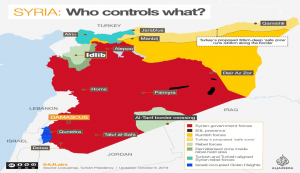 It will be in the interest of peace and humanity for Syria and Ankara to agree on the safe zone to accommodate the refugees and to avoid the conflict, permit the Kurdish to move southwards. However as much as it can be impossible, but as historians and humanitarian’s students we would like the officials to discuss the issue of giving Kurdish semi-autonomous regional land.

These millions people after the collapse of Ottoman empire, they were promised an autonomous state towards the end of world war one, however Turkey rejected that Treaty of Sevres. We argue that there will be wisdom in revisiting that discussion, to avoid another conflict in the future.

This is another mechanism that can be utilised in solving Syrian War, which has come as a result of long negotiations of two years. This committee will be launched in few weeks’ time in Geneva, which will constitute 150 members from government, civil society and opposition parties. The responsibility of this committee will rewrite the Syrian constitution, which is critical for the purpose of peace. We hold the view that this is the ingredient towards our objectives, as rewriting constitution might bring the reforms that the masses were calling for which started the protest in the first place. In addition, we argue that the representation should be balanced in all parties, 50 from governments, 50 from civil society as well as 50 from opposition parties, in order to avoid complaints from opposition not recognising this committee and its decisions.

Furthermore, we also urge the relevant officials in their oppositions to select as widely as possible, even those small minority, marginalised groups to be accommodated. History has taught us that a peace accord that is not inclusive is likely to receive mixed emotions which might cause another outbreak of war, as we have seen in South Sudan peace deal, where violence continued in regions where rebel groups were not part of peace deal. Moreover, we also worried about the issue of Idlib province which is currently under the control of rebel forces, and Assad seeks to take over that area military. It then becomes imperative for officials to deliberate this matter before Assad attacks the area and causing another bloodshed

Furthermore, we assert that this committee will be a turning point, as UN Secretary General Guterres has emphasised that this ‘Syrian-owned and Syrian-led’ constitutional committee will be facilitated by the United Nations in Geneva and he also thanked Russia, Iran (Assad allies) and Turkey (Syrian opposition allies) for their efforts.

We are however cautious about the status of Kurdish as well as ISIL group as some participants in this committee categorized them as terrorist group, we are therefore call upon the committee to deliberate on this issue and find amicable solutions for all parties. We are hoping the

Committee next month will be fruitful for the aspiration will of the Syrian people and end the killings of innocent people.

We also call for the hybrid approach of this nature to be supported where the UN envoy will work hand in hand with Arab League in ensuring that there is no continuation of troop movements in the region that might cause another war. Arab region is a fragile region, and therefore we urge for the UN-Arab joint efforts in supervising cessation of armed violence. Also ensure fast delivery of humanitarian assistance, the release of detained people

United Nation General Secretary states firmly that no military action will solve Syrian War, it is only through an inclusive political dialogue that we can end this longest worst humanitarian crisis and create sustainable peace in Syria as well as in the Arab region. All of the above-mentioned intervention are an attempt in addressing the bloody war, and we argue that the implementers must be cautious of its weaknesses or constraints and must capitalise on the strengths of each plan to counter the weaknesses.

We urge the relevant officials to address our fears as not to repeat the failure of Sudan peace agreement (which failed to account to all parties) and avoid the re-occurrence of the conflict. With this, we will be able to progress towards a peaceful Syria. More importantly to comprehend is that, the officials can combine all the above mentioned mechanism or select the strongest points from each plan in solving the Syrian war. Our hope is that those who care can turn our plan into a present reality.

We have tried the rest in the past, let us now try the best. Time is now. Come let us save humanity.