High technology, stunning animations, clean environment, advanced garbage classification method, polite citizens… Which country do you think is it based on the keywords above? For me, it is Japan. I believe that most of you illustrate Japan as a nation with substantial advantages. However, nothing is completely perfect. Some of you may not know this developed country has its underdevelopment side – gender inequality. According to the Global Gender Report of 2018[1], Japan ranks 110 out of 149 countries, in between its neighbours China (103) and South Korea (115). In details, Japan ranks 117 in “economic participation and opportunity” and 125 in “political empowerment”. Those figures strongly prove that Japan has to work harder on enhancing women status.

Why is gender inequality still existing in modern Japan? Let’s hop on time machine and find some clues from the past! In fact, women owned relatively equal social as men in ancient Japan. Between 6th century and 8th century, six female emperors had been recorded in history. Then to Heian era when noble culture was blooming, women who were highly educated had contributed outstanding literature to Japanese culture and had more freedom. Howbeit, the open atmosphere started to become closed since late Edo period when Japan has entered modern era. A published book Onna Daigaku which was influenced by neo-Confucianism in China states that women should not believe in themselves as they are foolish. Plus, they have to obey their husbands and dedicate to his family. Standards and rules of this book evidently depreciate Japanese females’ values and deprive their rights as individuals. Travelling to Meiji era which experienced industrialization and urbanization, women were deeper restricted under the “ie” (“household” in Japanese language) mechanism, although men authority has been weakened. Arriving at post World War II, females gradually got back their equal legal rights (including voting), education rights and salaries as men, while inequality in economic as well as politic field is not solved yet.

At present, gender inequality is yet permeated at various aspects in Japanese society. According to a report from International Monetary Fund[2], a great number of Japanese women are “non-regular” workers who receive low salaries and have higher risk of being fired by employers, compared to “regular” worker. Exceeding 53% Japanese female aged 20-65 years old are non-regular workers while 14.1% men in 2014. Besides, Japanese women play a weak role in management positions: in 2016 only 6.4% of women are “department director”, 8.9% are “section head”, and 14.7 are “task-unit supervisor”. As for politics, it is stated that only 9.5% of women have seats in parliament[3]. Also, princess from Japanese monarchy will no longer keeps her title once she marries an ordinary citizen. In terms of education, in 2018 three medical universities (Tokyo Medical University, Juntendo University, and Kitasato University) admitted that they have had unfair standard for male and female applicants, letting more male applicants into school. Likewise, some Japanese parents think that girls are better to study in short-track college instead of four-year universities. Furthermore, some women who encountered sexual harassment neither had the courage to reject at that time, nor reported to the police or shared it in public afterwards.

Seeing those unfair situations going on nowadays, do all Japanese people remain silent and bear with it forever? Definitely not.

Japanese government has been taking the lead on changes. Internationally, Japanese government is trying to call for gender equality and cooperate with other countries on women empowerment. During the General Assembly of the United Nations in 2013, Japanese Prime Minister Shinzo Abe proposed to build “a society in which women shine” and believed that the concept will make the world better[4]. Also, Japan hosted the global leader’s declaration at the G7 Ise-Shima Summit in 2016 and declare that Japan will follow the G7 Guiding Principles for Building the Capacity of Women and Girls for future actions. In addition, Japan has annually hosted World Assembly for Women since 2014 to discuss about women empowerment’s challenges, efforts and good practices. Domestically, Japanese government attempts to enlarge women participation by rising fund on such as childcare and women continuous education and women leadership training program. Thus, Japanese women who are currently having a job in 2018 are 2.9 million than in 2012.

Only government’s reaction is far not enough. Ordinary citizens, especially victims, should also speak out for themselves. A female journalist Shiori Ito must be one of 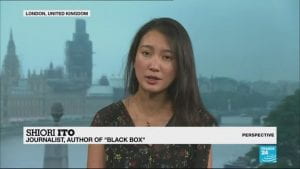 the brave ones. In 2015, Ito was raped by a famous male journalist Noriyuki Yamaguchi at a hotel in Tokyo. Then she filed her story in the police station and investigation was launched, but in 2016 the case was given up due to lack of evidence. Coming to 2017, Ito decided to let more people know about this issue by disclosing herself and telling her story in public. She urged Japanese parliament to amend laws on rape laws, which came true even though there is more room for improvement. Meanwhile, the case was turned into civil lawsuit. Even so, Yamaguchi has kept denying his crime. The fight is still going on. In addition, Ito has narrated her story into the book Black Box and documentary Japan’s Secret Shame. Another brave person is Chizuko Ueno, a Japanese sociologist and well-known feminist. She has 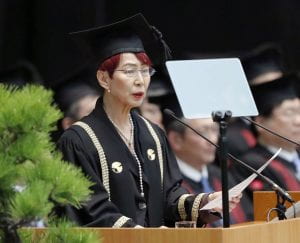 been researching in women studies and trying to raise women status in Japan. In this April, Ueno gave freshmen of Tokyo University a speech at their entrance ceremony. She kicked of her speech with a scandal of discrimination on female applicants in Tokyo Medical University which also exists in other universities’ medical faculties. And then, she analysed the inequality situation behind this phenomenon, also pinpointed female discrimination in Tokyo University. This speech reveals that gender inequality has been rooted since people’s childhood. (I only talk about it in general, so please do find some relevant articles if you are into this speech). In addition, #MeToo 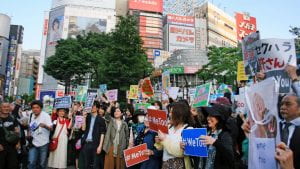 campaign has been spread from the US to Japan. In April 2018 around 300 people raise placards with #MeToo at Shinjuku station in Tokyo[5]. This campaign was initially against Junichi Fukuda who was involved in a sexual harassment case, and eventually to encourage women to say no to sexism bravely. This protest is organized by Yume Morimoto who thought the high participation was because of substantial outrage along with lack of platforms for expression.

To fight against the men-dominant phenomenon has a long way to go in Japan. We should not just remain in reading now. Why do we bear it? why do we, women, have to accept the opinion that we are not as good as men, and our ability should be buried? Why don’t we take actions to fight back immediately? Even if it may be a shout in the tram or a paragraph on social media, it can make difference. The more we tell the public; the more people will be aware of the logic behind gender inequality. Thus, more people will join us. We must speak up and support those women who suffer from inequality treatment. Oh, do not forget that if your country’s women also have this situation, please also support them.

Don’t be silent and stand out!