One would assume France would be an advocate for women’s rights and equality, especially considering the fact that they are part of the European Union and first world communities, and the fact that the term ‘feminism’ was actually coined by a French woman. France is also known for strong revolutionary females such as Olympus de Gouges, Coco Chanel, Simone de Beauvoir and Marie Curie. But is it really the case? Are French policies and social structures designed to be female inclusive and promote their rights?

Since the first wave of feminism women across the world have fought for their rights to be recognized and for societies to remove patriarchal structures that view men as dominant and give them greater opportunities. In most parts of the world women are seen as a minority and weak figure, who were only meant to be a subordinate to men. They are caregivers whose sole duties is to bare children and take care of their families. For a long time in history women were not given the same opportunities as men; access to educational resources/infrastructures, market and economic participation, political voices and representation and leadership roles.

The feminist movements that occurred as of the 19th and 20th century shaped the way in which women are seen today. These movements and feminist waves have had a great influence in many parts of the world, especially in the United States and Europe, in the developing nations woman continue to fight for the most basic rights and opportunities.

In the beginning of the 20th century, the French society started making changes in the gendered structures, i.e. the emergence of female expertise and recognition of them as experts. The lives of French women radically changed in the 20th century…read more.

They gained more rights and were starting to be seen as equal to men. In the 1944 French women obtained their right to vote, however this was 24 years after American woman and 51 years after New Zealand women cast their first vote meaning France lagged in woman’s voting rights…read more. Progress in women’s rights and equality gradually happened in France in 20th century; woman obtained the right to open bank accounts without the husband’s permission, contraceptives were made legal and abortion was legalised soon after and liberation movements took place. 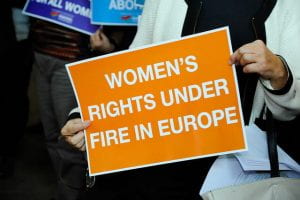 In the 21st century women in most parts of the world were legally able to do just about anything they wanted to without being shamed for it, and they noticeably had ample opportunities similar to men. In France, and most of the developed Western countries, women were now relatively almost equal to men in terms of rights and opportunities. Although France has made progress for equal rights and equality in general, there are still gaps in certain aspects.

After the 2030 Agenda for Sustainable Development, France adopted the resolution which encourages nations to fight and end the violence against women and girls, as well as Security Council’s resolutions on women’s equality, peace and security. As a result, France also supported the creation of programmes and projects that end violence against women, for e.g. Rights, Equality and Citizenship initiative…read more. But how effective has the resolution adoption and programmes been? Well to some degree women in France are liberated in the 21st century, but there is still an evident gap between the sexes in France.

In the beginning of the 21st century, the gender gap in French politics was recognized and ratified. As a result, French law stated that in parliament there needs to be 50% females, therefore for the first time in history women in France had a strong presence in politics and obtained rights to be a voice for women in a politics. However, as of 2019 statistics the pay gap in France still had women earning on average 24% less than men and many careers are still predominately male, for example, the construction industry has only 12% of women employees. However, this is even worse for French women who have always aspired to be bosses of France’s major company, because in the country’s 120 major companies only 9 of them have a female CEO…read more. The numbers and difference are such a sad reality, considering all the movements feminists have done to achieve equality and conference and conventions resolutions to achieve gender equality. This clearly shows that although French law has progressed, there are still some inequalities in genders. And because of this the G7 – Women’s Right thought that France has not done enough to fix the gender equality issue. 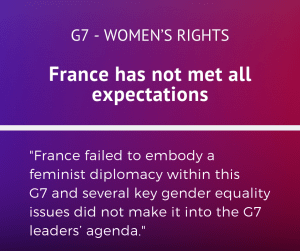 However, France is not the only country experiencing such major inequalities within their structures. Gender inequality, lack of women empowerment movements and lack of acknowledgement of women’s human rights is a global phenomenon. France has at least taken some initiatives throughout the years in an effort to uplift women, bridge that inequality gap as well as encourage their rights. For example, France has enforced ‘gender’ actions in their development assistance policies, and they did this through their 3rd International Strategy for Gender Equality (2018 – 2020), and this strategy is a navigating tool designed to coordinate actions and initiatives over the 5 year period to improve the global situation of women’s inequality…read more.

In addition to their gender strategies and policies, the French government ultimately believes in the empowerment of women through their recent reproductive law, ultimately France wants to lead by example in terms of reproductive and abortion rights especially at a time when certain countries are particularly infamous for their abortion laws. But the question is why are they only taking a major stance on reproductive rights now in the 21st century when women have demanded for a broader reproductive rights legislation over decades ago? Only in 2014 did the French government sort of give women the ‘go-ahead’ for obtaining abortions within 12 weeks of pregnancy, as well as enacting legislation that states that the government is required to cover the cost of legal abortions and contraception for adolescent girls…read more.

The comparative research for women in the 20th century and today (the 21st century) in France will ultimately reveal a positive result. When looking at the laws, policies, strategies and initiatives the country has enacted since the feminist revolutions there’s a clear picture that women’s empowerment and rights have been incorporated in many of their systems and structures. Therefore, the movements and revolutions of many women from all over the world have had a significant impact in not only France, but many other countries.

To conclude, are women far from being equal in France? Did the waves of feminism have a positive impact in shaping the way women are viewed and treated in France today? Well to some degree, yes one can assume that comparing to other less developed nations that women in France have equal opportunities to men and have close the inequality gape between men and women. However, when we look at figures and facts women’s rights and inequalities in France are still far from reach. The slow steps taken by the country is the reason to assume that women are not entirely equal to men as many feminists would want them to, but the country has embraced and acknowledged women rights and human rights of all genders, and they continue to take steps to reach equality. Thankfully, now in 2019 women in France can do just about anything they want.

Epstein, A.R. (2012). Gender and the rise of female expert during the Belle Époque. Retrieved from https://www.cairn.info/revue-histoire-politique-2011-2-page-84.htmDocument

Rickman, C. (2019). A Brief History of Women’s Rights In France. Retrieved from https://frenchly.us/a-brief-history-of-womens-rights-in-france/

Gorman, S. (2019). The shocking figures that show the fight for women’s rights in France is far from over. Retrieved from https://www.thelocal.fr/20190308/equality-remains-elusive-in-france-on-internationals-womens-day-2019