Since the new King of Saudi Arabia Salan Bin Abdulaziz Al Saud inherited the throne in 2015, the country has been claiming to be more progressive, especially towards women rights. For example, since 2018, women are now allowed to drive. Moreover, the government claims that it is working on empowering women, integrating them to the labor market and giving them scholarships to study abroad.

Is this really the beginning of equality in this patriarchal society or was that just show the get the UN and Human Rights advocates off their back?

As positive as this sounds, and of course, Saudi Arabia cannot drastically change overnight, the country is still decades (if not more) behind western countries. It seems that people in and outside the country applaud Saudi Arabia for all the changes, when in reality, Saudi Arabia is still a country where women are only second-class citizens. As much as we want to believe that equality is emerging in the country, it still has a long way to go. Here is why:

Saudi Women gain more independence. But what is this male guardianship exactly?

Saudi Women can now drive, they can study abroad, hire a lawyer get divorced, forced marriage is now prohibited. Sounds great doesn’t it?

But there is just one little thing which contradicts everything. Male guardianship. Under the Saudi Law, all women must have a male guardian. Women need the permission of this guardian, usually a father or brother if they are not married, to get married,  to obtain a passport, go to university or hire a lawyer. So yes, they are allowed by law to do all this, but only if their guardian agrees to it.

The good news is that the King is changing the law and women above 21 years old will be guardian free. But still, what if a young woman wants to go study abroad and broaden her horizon? Not if her guardian disagrees. What if she gets assaulted and wants justice? Well this is a whole other story actually. For a lawsuit to be valid, a woman in Saudi Arabia will need six male witnesses. Yes, six. That makes it almost impossible. In addition, a man will get twice more inheritance if a family member dies. In some rural areas, the Saudi woman might not see one dime. 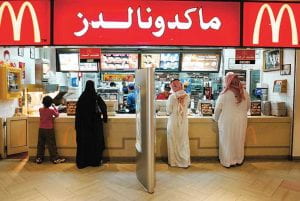 But there is more. Gender segregation is still a thing. Be it at the beach, public transportation or at restaurants, women and men are still separated. Even Western restaurants such as McDonalds and Starbucks play the game and have seperate sections for families and for singles. And when Starbucks was doing renovations and had to take down the separation, guess who was not allowed to enter the store?

You got it, women.

Lastly, Saudi women still struggle with severe punishments. They can get sentenced to jail or even beat with lashes for speaking up when they were not supposed to or wearing clothes which are too revealing or not heavy enough. Once in jail, they can get out with the permission of their guardian only, which means that he can also choose to let her stay longer if he sees fit.

So yes, there is more indepence. But it still very much depends on who the guardian is. Especially in rural or tribal areas, women still suffer under this law.

Equal Education for All. Yes, but…

Saudi Arabia proudly mentions to the rest of the world that it has more female college graduates than male. But still, women have one of the lowest employment rates in the world. How can that be?

First of all, there is a big difference between the education a woman receives compared to the one of a man. Remember the chapter on segregation? Well this applies to school as well. It is easy to imagine that a woman in Saudi Arabia will learn very different things than the other gender. When the first girls school opened in the 1960’s the idea was to educate women in order to instill the beliefs and visions of the Kingdom. While men would learn “typical male” activities, women were thaught to be nurturing and a good housewive. Today, women do receive a proper education, however this belief is still integrated in society. While male graduate with degrees in science or business, women have a degree in teaching or similar.

Overall, Saudi Arabia ranks as the 141st country out of 149 on the global index on gender gap by the World Economic Forum. It is still very difficult for women to find a job. Only 23% of Saudi women have a job. And even when they get one, they will get paid less and do not receive medical insurance. This is a sign on where the place of a woman in Saudi Arabia should be according to society: at home taking care of the children.

Saudi Women at the Olympic games, a big step towards equality?

The year 2012 was a big year for female athletes in Saudi Arabia. When Sarah Attar crossed the finish line of the 800m run at the Olympic Games in London everyone was cheering. Not because she won, but because she was the first Saudi woman at the Olympic Games together with her team mate Wojdan Shaherkani. This was a sign of hope for all women in and outside the Kingdom.

However, this is not the full story. The reason for Saudi Arabia to allow them to compete back then was the pressure made by the International Olympic Committee. They were threatening the Kingdom to ban them from the Games altogether. Meaning all the men as well. At that time, women in their own country were not allowed to participate in national sports, go to the gym or even to attend a game at the stadium. Quite ironic no?

The good news is that a lot has changed over the years. For the next games in Rio, the amount of female athletes doubled. Women’s gyms are opening because of the high obesity amongst fem 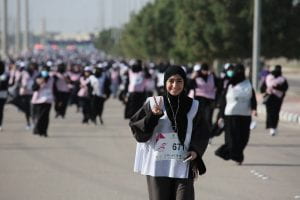 ales (probably from not being allowed to do sports), since last year women are allowed to go to the stadium to watch games and even the first ever women’s run took place in Al-Ahsa!

While this shows that the Olympic Games did shake up things in the Kingdom, women’s participation in Sports is still frowned upon and there are no scholarships or special training available. Now the word “sportswashing” is being tossed around. Just a few days ago, the World Wrestling Entertainment (WWE) took place in Ryadh for the first time ever. Organizations such as Amnesty International claim that Saudi Arabia is using big sporting events such as the WWE to “sportswash”, meaning manipulate how they are perceived and distract from their human rights records. No matter the reason it is clear that women and sports in Saudi Arabia still have a long way to go.

Who knows what’s coming next? What do you think will be the future of Saudi Women? Is Saudi Arabia really changing towards women empowerment or is it all just a show for foreign countries?

Comment below! I would love to hear your thoughts.

To read more about Saudi Arabia and its changes, check out this interesting post on the new Crown Prince.