Italy. The country of good food, cappuchinos, good looking men & women and the fashion industry. These may be the words that come to your mind thinking about Italy. It sounds like an  idyllistic and dreamy country to live in. BUT, what is it like to actually live in Italy as a woman? Are women still only seen as the mother and caregiver of the family or is this currently an old fashioned way of thinking? In this blog you will get to understand more about women empowerment in one of the most popular countries in Europe.

‘’What is it like to live in Italy as a woman? Is it really the dream?’’

What is the role of Women in Italy?

Women can be seen by many Italians as the ‘soul’ of the family.  You could state that the mother of the family is ‘sacred’ to the children. The man would work and the woman would be in charge of cooking, cleaning, and looking after the children. When the mother cannot take care of herself anymore, she will live with her daughter or son. Traditionally, this is exactly what Italy’s gender roles had looked like. But after World War II, the traditional gender roles had began to change. Italians always have embraced their relationships with extended family as well (“Italy – Education And Gender Roles”, n.d.). Gender inequality in Italy is one of the biggest reasons behind poor life quality ratings. It was even found that in Italy, women are 15 percent more likely to be unemployed and, even when employed, they are 75 percent more likely to be employed in low-paying jobs. The new EU strategy on gender equality, gender equality in employment, reconciliation of work and family life, presence of women in decision-making positions, and recent measures to fight violence against women are presented. The overall picture which emerges is that in many fields, Italy has reached some satisfactory results, thanks to relevant progress under the pressure of the women’s movement, civil society, and European legislation. For sustainable development, any progressive nation should take into account critical issues like gender equality and women’s economic empowerment. 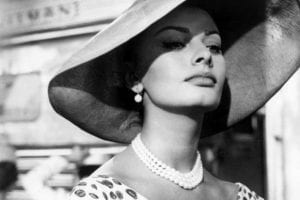 Today, the culture and politics of women help to establish networks of women in different fields, utilize women’s skills and abilities as entrepreneurs, professors, and researchers, and establish a link with schools to promote educational activities aimed especially at young people (“Women in Italy”, n.d.).

The North vs. the South of Italy

Traditional roles of women are changing. Currently, women and young girls are getting more opportunities to do more with their lives than to ‘just’ be a house mother and wife. However, this does not apply to everyone. For example, there is still a big gap between the North and South of Italy in terms of their way of thinking, but also in terms of poverty. Everything above Rome is considered to be “northern Italy.” It’s the industrial workhorse, producing over 90% of Italy’s exports, and is the wealthiest of the two regions. The Northern part of Italy is far more developed and richer than the Southern part of Italy, which includes the question of women’s rights and empowerment. The old fashioned way of thinking about women, which is: seeing young girls as young women that will become housewive, applies more in the South compared to the North. It is important to make this gap less big. Young girls that are from poor families in the South do not have opportunities to better themselves. This is basically because they cannot afford this, in a financial and philosophical way.

Italy’s particular divide comes from thousands of years of different rulers. The south was ruled by the Greek, Arabs and Spanish, while the North was ruled by the Gauls, French and Germanic tribes. Each was profoundly influenced by its rulers. Even today, Southern Italy is more similar to Greece than it is to Northern Italy. Northerners call the South Africa. Southerners call the North Germany (“Are there differences between northern Italian and southern Italian culture?”, n.d.). 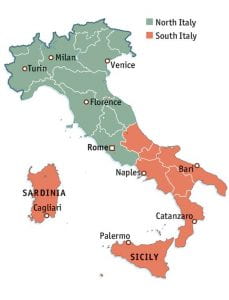 In this image you see the division of Italy; the Northern and Southern part of Italy

What can be done to encourage women empowerment in Italy?

Italy has already come up with laws that should protect women from harrassments by men. Italy came up with this once a woman was beaten to death by her husband. On the one hand it is good that there are laws to protect women, but on the other hand it feels like a weakness. Women are a target group, which means that they are not equal to men. Also, it is a sure fact that most women are too scared to let their case go to court. So, how effective are these laws? Women are too scared to leave their husband or are too afraid of the consequences for family (honour). What about the the fact that laws specially created for women are needed so women can feel a bit more protected in their daily lives, even though we do not know how effective these kind of laws are? We need to create more respect for women! Even in Italy, the family is functioning because of the women; the mothers and the Nonna’s (grandma’s). How come that women are not as much as praised as they deserve to be praised? There is a certain stigma, which leads to women remaining in their role which is given tot hem many years ago. We need to break this stigma.

How can we undertake action? For example:

● Creating more job opportunities for women
● Mentoring women professionally but also mentally
● Lecture men about women empowerment for example by obligatory courses at their job. In this way there can be advocated for female colleagues
● Investing in small business owners which are woman

To tackle the problem of poverty

A simple and obvious solution could be to hire more women in the workfield. Seen the fact that the Southern part of Italy is dealing more with poverty than the Northern part of Italy, the focus to hire more women should be more on the Southern part of Italy. It all starts at changing the image of women within the Southern part of Italy. Raising awareness is the key. An example of a resolution of how this could be realised is in relation with education. It is important that children are being raised with the idea that men and women are equal and that it should not be different within workforces. Workforces should also adjust their way of hiring people and make the process more ‘women-friendly’. Perhaps the most important change is the decline in domestic violence. Here, the empowerment of individual women is starting to translate into wider changes in the social acceptability of domestic violence.

However, there are no certain laws that protect women from inequality. Protecting women from in-equality is something we as human beings should create. Laws could support the movement of encouraging women to be empowered. Gender equality should be spoken about more often, also in court and within laws. First protect women, listen tot hem, hire them more often and raise awareness of the changing image of women, especially within the South of Italy. Human rights state that human beings should be seen as equal, which also applies to men and women!

What can YOU do to be part of women empowerment?

It all starts at taking a good look around at the women around you. Appreciate them and help them when needed, so they will feel supported. Do not accept any down talking about women. Women are strong. Women are united. Women are equal to men. If you are an investor, invest in business women. Are you a teacher? Teach your students about women empowerment! Are you in human resource management? Hire more women! There is no need to take rigorous steps, just start in your own environment and be part of the women empowerment movement!