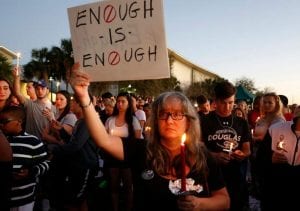 Looking at Japan – why do these policies work in Japan?

The reason that the gun violence in Japan is lower is due to a smaller population (one-third of the population size of the United States), stricter gun laws, and higher quality of life. Another important factor is that in the 60’s, after the second world war, Japanese citizens voluntarily gave up their guns because they no longer wanted to be associated with war or violence. [3]

Japan also reduced gun violence through their police.  Police are allowed to carry guns, but there are restrictions. It is very unusual that a police officer will use the gun and they have to learn martial arts to themselves and others. Although they do not carry guns, the police visit gun owners at home once a year to make sure the guns are kept properly. 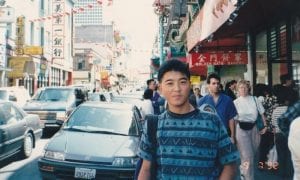 In October 1992, in Louisiana, a Japanese exchange student named Yoshihiro Hattori (16 years old) went into the wrong house on the way to a Halloween party. The homeowner’s wife screamed for help and the homeowner drew his .44 pistol and yelled at Yoshihiro to ‘freeze’. Not understanding the American idiom that translates to ‘Don’t move or I’ll shoot’, the student continued advancing towards the homeowner. The homeowner pulled the trigger and fatally shot him. While the incident initially attracted only brief attention in the national American press, the shooting horrified Japan.  As a result, hundreds of thousands of Japanese citizens signed petitions calling for the United States to implement gun prohibition. The homeowner was later on found not guilty of manslaughter.[4]

The incident was huge in Japan and caused great commotion. In the US on the other hand, it was a minor incident that was quickly forgotten. This example clearly highlights the differences on how incidents involving guns and death are perceived by the two countries.

Did they give up their guns because of the number of deaths? Was it because of fear of the power of a gun and what it represents (the ability to harm or take a life)? Was a patriotic move – a way to try and save their nation? It is  not exactly clear why, but it is likely a combination of all these factors.

The aversion to guns may stem from the simple fact that there is almost an entire generation that did not grow up around guns and therefore does not feel comfortable around them. If you were to ask a Japanese 18-year-old: ‘What do you think about guns?’ – they would likely tell you that it is to go hunting and hunting only. This generation does not associate guns with self-defence and for them guns are not an item of self-defence, nor something they want around them.

Japan has the following laws for firearms:

To give a better insight in the matter, here is an example. In the Unites States there are shooting ranges where ‘tourist’ can fire a few rounds with guns. Japanese tourist who fire a few rounds would be breaking three separate laws back in Japan. One for holding a handgun, one for possessing unlicensed bullets, and another for firing them. The first one alone, is punishable by one to ten years in jail.

Another example: small-calibre rifles have been illegal to buy or sell since 1971. If someone owned one before then they were allowed to keep it, once the owner of the rifle dies the gun has to be turned over to the police.

The last big shooting took place on January 12th, 2010. The attack was carried out by 49-year-old Yasuhisa Sugiura. He was a government employee in Japan’s second-largest city Osaka. According to police, he was involved in a “troubled marriage” with a 48-year-old woman. He killed three people (his mother in law, the owner of the establishment where the shooting took place and an employee of the establishment) using a rifle and committed suicide afterwards. After this the Japanese government took no further action, since it was not considered a terrorist attack and stricter gun laws would have not helped to avoid this rare incident.

Looking at the United States – what are the gun control issues?

Following the Christchurch mass shooting in New Zealand, the country began to pass laws and policies making their already tight gun control policies tighter. This has never happened in the US following the many, many mass shootings that occur in the country, and is unlikely to happen any time soon[10].

Firstly, let’s look at some facts:

Stricter gun policies are not necessarily unpopular, and according to Gallup 61% of Americans thought gun laws should be stricter. Support for specific measures that restrict access to guns is even higher with Americans supporting background checks for all gun sales, including private exchanges between individuals, and a national gun ownership database[15].

Well, because of two interlinked factors. First what is known as the enthusiasm gap and second the NRA’s powerful interference in US politics. The enthusiasm gap only highlights that gun owners and gun rights activists have simply been much more activated by gun-related issues than supporters of stricter firearm laws[16]. 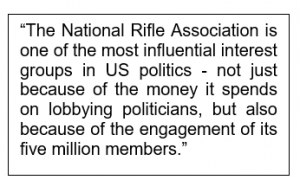 The NRA is aware of this issue and taps into this by accessing millions of its members and mobilizing them to protest against any proposal to restrict guns[17]. Their rhetoric stands on the basis of “The only thing that stops a bad guy with a gun is a good guy with a gun.”

If you want to know more about the NRA watch this video -> “How the NRA hijacks gun control debates” (STRIKETHROUGH S3-E5) by Vox Media Inc.

The NRA also takes advantage of the US’s unique legal environment – America acknowledges an individual’s legal right to own guns, through the Second Amendment in the US Constitution.

And even if a president, or anyone for that matter,  attempted to enact stricter gun laws, they would probably fail. Why? Because of how the US political system is structured, with multiple checks in the system presenting several veto points to just about any legislation[18]. 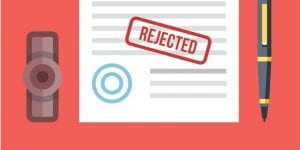 Basically, for a bill  to become a law, it has to get majority approval from the House and Senate – which is tricky because it’s not a representative body (each state has equal representation, regardless of population). Then there is the filibuster which requires most legislation to get 60 out of 100 votes, instead of a simple majority. And then, of course, the president could veto the bill anyway, which Congress can only overcome with a two-thirds vote. This makes it nearly impossible for gun control policies to be put in place, as there are too many points at which the bill can fail[19].

So, the main factors between America and stricter gun control are: 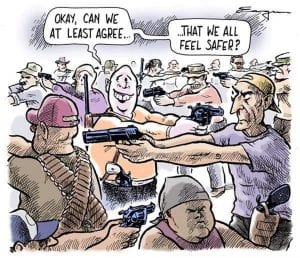 Essentially, gun control advocates are guided by common sense and understand that gun control legislation would be of benefit to the country. Gun rights advocates on the other hand stand behind false facts and a very old piece of legislation that gives their cause legitimacy.

Let’s compare how both countries reacted to the incident – where a Japanese 16-year-old boy was shot after entering the wrong house in the United States. 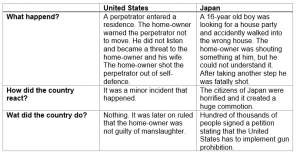 The table above only serves to highlight how each country perceived the incident the impact it had.

Why should you care? 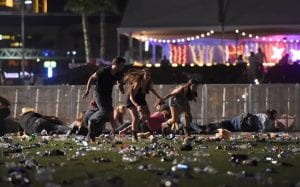 Imagine something bad happening to your loved-ones, and nothing has been done about it. You would like the help as well right? You can give that help to people who need it, to make for instance the United States a country with a better gun policy. But it is not only the United States. It is believed that the gun violence only happens far away from you, but is that really the case? No.

In today’s world, and with the help of social media and technology you see gun violence and its effects from anywhere in the world. And no one wants to see yet another mass shooting that killed innocent people.

Take for instance what happened in New Zealand recently, one of the safest countries in the world. The shooter drew inspiration from white nationalist rhetoric of America.

This means, anyone, anywhere, can get inspired by anything, and if they decide to act violently and have access to guns? They may a mass shooter, and they may be close to you.

What can you do?

If you are unsure or unaware of the stance your country has relative to guns we urge you to look it up. There are a number of things that you can do to make your country safer[21]:

If you are in the US there is also a number of petitions you can signs and protests you can join in and attempt to mobilize the government to enforce some gun control laws.

If you want to know more information follow this link à  https://www.theguardian.com/us-news/2017/oct/04/five-things-you-could-do-right-now-to-reduce-gun-violence-in-america