“The door swung open and I saw a little girl, perhaps 12 or 13, lying on the ground screaming as a group of men took turns to kick her. Blood poured from her nose and she was howling, screaming in pain. One of the men grinned and started fooling around with a baseball bat in front of me, as if in warning.”

After 24-year old Shandra Woworuntu lost her job in the Asian financial crisis, she started looking for a job overseas to be able to support her 3-year old daughter. She found a job at a big hotel. When she arrived at the airport, all her documents, including her passport, were taken from her. She was led to a car, which instead of bringing her to the hotel where she would be working, eventually took her to a brothel. Only a few hours later, she was forced to have sex. Shandra was terrified and after witnessing the acts of violent against other victims, she learned to do what she was told. She went into ‘survival mode’. When going somewhere, she and the other victims were under constant threat of a gun to prevent them from trying anything. The constant threat of violence is exhausting. During all this time of being trafficked, Shandra was fed plain rice soup with some pickles and has lived on drugs, beer and whiskey. 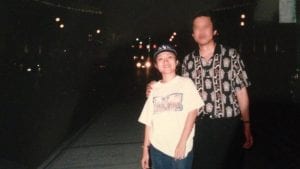 Shandra Woworuntu with one of the men who trafficked her.

As happens in many cases of human trafficking, also Shandra was told that she had a debt with the traffickers and she would pay them off by serving man. The debt was $30.000 and per man Shandra would pay off $100. She freaked out and felt sure she would not survive serving 300 men. This triggered her will to escape and one day, Shandra and her friend Nina managed to escape and live save and sound for a few weeks in a hotel, with a man that took care of them. However, after a few weeks this man tried to get Shandra and her friend to sleep with men in the hotel and as they refused, the man called their former trafficker to come and pick them up. It appeared that this man was in the business together with the former trafficker and the brothel they came from. When awaiting the trafficker to arrive, Shandra had a stroke of luck and managed to escape and take off. She talked to policemen, the Indonesian consulate and people on the street, but nobody believed her nor offered help. She had lived on the street for quite some time when one Shandra told her story to a stranger and this man has passed the story on to the FBI. Finally they picked up the case and together with the FBI and the police Shandra drove to the brothel, where she identified the traffickers and the victims were freed. The whole process against the traffickers took years. At some point they even went to Indonesia to look for Shandra’s mother and daughter, so they had to go into hiding. After everything that she’s been through, Shandra developed skin problems and started having severe pains and numbness in her joints. After 15 years, she still has sleepless nights and goes to a therapist every week. To help other victims and raise awareness of human trafficking, she started an organization and speaks about her experiences in church halls, schools and government institutions. Even though she has a positive mindset and helps others, Shandra herself, nor her life, will ever be the same.

In Russia, between 5 and 12 million people live their life in these complete inhumane circumstances, being trafficked, treated as slaves. Their pay is minimum (if they even get it at all), they have no free will, their passport is taken from them and together with that, I think it can be said that these people ‘lose’ their identity. People that are trafficked are commonly forgotten, they are treated as if they don’t matter at all. Unfortunately, in Russia human trafficking happens on a day-to-day basis and to such large extent, I am afraid people might have forgotten that this is actually a very serious problem that should be dealt with.
Of 187 evaluated countries in the world, Russia is one of the worst concerning human trafficking. For the sixth year in a row Russia is among the worst offenders together with 21 other countries that were ranked Tier 3 – the government “does not fully meet the minimum standards for the elimination of human trafficking and is not making significant efforts to do so” – according to the Trafficking In Persons (TIP) report. Why and how does this happen? How can we recognize human trafficking and is there something we can do to stop this horror? 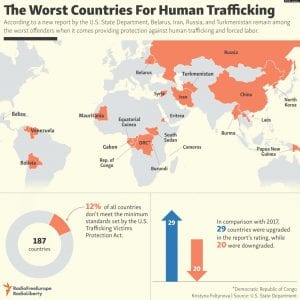 The worst countries for human trafficking shown on a map.

Every year, an estimated 20.000 men and women from North-Korea are brought to Russia to perform forced labour. The North Korean regime has contract labour for logging camps in the Russian Far East. It has been said that the North Korean government and North Korean companies control the workers’ movement, that up to 85% of the wages are withheld and so there are allegations that this labour is exploitative. Besides that, women and children from Nigeria, Central Asia, Ukraine, China, Moldova and Africa are put through forced prostitution in Moscow and St. Petersburg, having men from Western Europe and the US visiting for the purpose of child sex tourism. As if this is not enough yet, people from Belarus, Uzbekistan and Ukraine (to name just a few) are forced to work in the construction industry, textile shops and the agricultural and fishing sectors.
What a lot of people don’t know (including myself until a while ago when I started digging into the subject) is that big sport events such as the World cup, the Olympics and the Super Bowl actually come with warnings for a stream of trafficked workers, a lot of them children and mostly victims of forced prostitution. Reports show that sexual exploitation in Germany had risen 30% with the World cup coming up, in South Africa this was even 40%. But also relatively smaller sport events are a present for traffickers. It was discovered that around 30 Nigerian women, victims of sexual exploitation, were brought to Moscow for the Confederations Cup in 2017.

All of these victims of trafficking are subject to the control and coercion by their traffickers. The victims are abused in horrendous ways, both physiological and physical. The victims deal with never-ending debt to their traffickers, threats of violence, not only to the victim but also their family, and a cycle of raised promises that never come true. Moreover, they have to deal with imprisonment, beatings and intolerable living conditions. Victims are scared, fear for their lives and have nowhere to go.

The fall of the Soviet Union in 1991 has led to an increase in human trafficking, whereas the country now lacked a functional legal system, travel restrictions became looser and the country suffered economic instability. Even though Vladimir Putin introduced laws that make human trafficking a crime in 2003, after that no further anti-trafficking laws were initiated. Compared to the 114 other former Soviet Republics, who all together introduced more than 100 anti-trafficking laws, it can be said that Putin does not put enough effort in bringing human trafficking to an end. To visualize the urgency of this matter: in 2013 only 28 people were convicted of sex trafficking and forced labour, however there are more than a million victims of human trafficking in Russia. The lack of legislation makes the life of a trafficker rather easy and it significantly decreases the chance of ever incriminating one. What is even worse is that there are allegations of corruption in the Russian government, making human trafficking in this country an even bigger concern. According to these allegations, there are Russian officials who make the entry of migrants into the country for exploitation possible and other officials are bribed to not investigate the human trafficking crimes. If you though this was bad, the biggest player in this human trafficking game is presumably the Russian maffia. The maffia controls most domestic prostitution and international trafficking in Russia, they pay protection money to be able to do this and protect their territory. The fact that the Russian government and the Russian maffia are involved in the trafficking, might make it very hard for Russia to move up Tiers in the Trafficking In Persons report. 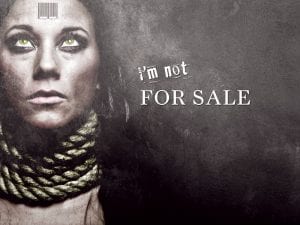 According to the Committee on the Elimination of the Discrimination Against Women (CEDAW) any of us can be impacted by trafficking through contact with perpetrators, victims or facilitators. Through organized crime groups or the use of companies, actually any country is vulnerable for trafficking and geographical location of degree of development is no guarantee against it.  Therefore, it is of high priority for the CEDAW to combat and punish traffickers, and hopefully eliminate the human trafficking problem. We might think that human trafficking is something that only happens in poor countries or scary back alley’s, but in reality this is the furthest thing from true. For instance, big hotels or cities are very popular places for traffickers to take their victims.
Even though it is very hard to recognize someone being trafficked, there are some signs that could ring a bell the next time you notice it. In general, the following is a list that could be potential red flags of human trafficking. The potential victim;

These are only a few of the many examples that could potentially indicate human trafficking. More information can be found on the National Human Trafficking Hotline website. Besides, if you recognize that someone needs help or you need help yourself, the National Human Trafficking Hotline toll-free hotline is available 24/7 (1-888-373-7888), where you will speak with a specially trained Anti-Trafficking Hotline Advocate. Everything is confidential and they can provide you with the help you need to stay safe. Also you can send an e-mail: help@humantraffickinghotline.org. Since human trafficking is a big problem especially in the hospitality industry, there is some information to be found specifically focused on this area. How to recognize human trafficking in a hotel, motel or restaurant can be found on the website of Homeland Security: http:/https://www.dhs.gov/blue-campaign/hospitalityindustry
If you work in the hospitality industry, you could take a look here so you are able to recognize potential human trafficking when you see it and take action.

Even though the above are potential red flags of human trafficking, these are only a few and you should trust your feeling when judging a situation. We should not underestimate this problem and take action right away when we have the feeling something is off. Whether it’s someone who you know or a stranger, we could save a life by taking action, and we should.

O’Brian, M. (2012). CEDAW emphasises its concern over trafficking in women and girls. Retrieved from http://opiniojuris.org/2012/09/09/cedaw-emphasises-its-concern-over-trafficking-in-women-and-girls/

Etchingham, J. (2017). The most harrowing story of human trafficking I’ve ever heard. Retrieved from https://www.itv.com/news/2017-09-11/the-most-harrowing-story-of-human-trafficking-ive-ever-heard/

Davenport, J. (2018). Human Trafficking: The other side of the World Cup nobody sees. Retrieved from https://www.huffingtonpost.co.za/john-davenport/the-other-side-of-the-world-cup-which-nobody-sees_a_23478428/