”I would like her to have blue eyes, curly brown hair, she has to be extremely smart and really good in any sports”. Imagine yourself telling this to your doctor, who fulfills these wishes for you. Designer babies seem as a possible option in the future, but the techniques are evolving, so it may not take that long before this would be achievable and maybe even normal in the world we are living in now. 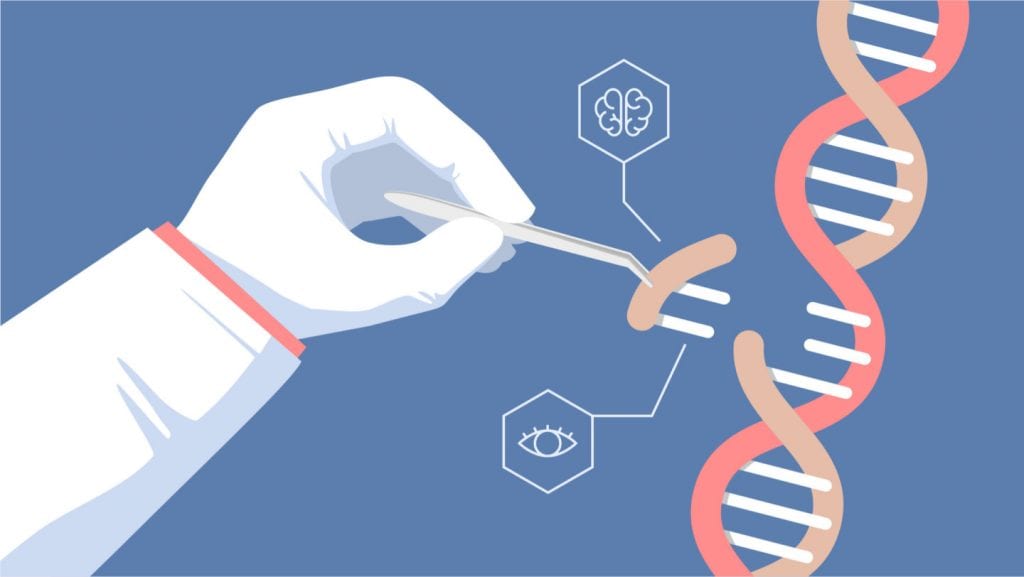 But first, back to the basics. What is gene-editing actually?
When a scientist makes a change in the DNA of a living organism, it’s called gene-editing. You can see this as a really small change in a tremendously big component, or in this case a genome. When referring this to animals or plants these changed organisms are called GMO’s, Genetically Modified Organisms. This can start from changes in plants to create faster and better growth of vegetables and fruits for example, to cloning animals or what is now an upcoming movement: designer babies.

There is also another scientific genome editing tool which is called CRISPR. This can be defined as Clustered Regularly Interspaced Short Palindromic Repeats, a mouth full. This is a mechanism that allows cells to record the viruses they’ve been exposed to. It can be programmed to recognize particular DNA frequencies, to detect and reject a new virus attack. Cas9 is a method which is used together with CRISPR, to target, and especially cut DNA on a specific location, so that bits of the DNA can be added or removed before the virus attacks.

Jennifer Doudna, an American scientist, was the first to discover the CRISPR Cas9 method in 2012, which was later refined by the American scientist Feng Zhang. This new technology shocked people and brought up questions about the morality of this. However, the scientists did not save it for a rainy day, because in February 2018, China already had nine registered clinical studies testing the CRISPR-edited cells, compared to the U.S. with only one. But why did the U.S. discovered the CRISPR Cas9 method and is China actually ‘running away’ with it? China as leading country in this scientific case could be a result of the fact that it is more easy for a new product, therapy or drug to enter the market in comparison with the U.S. where there is a more demanding system and would be maybe percept as more shocking than gene-edited babies in China.

You most probably already read about the Chinese scientist He Jiankui, who last year announced that he gene-edited the DNA of two embryos from which, in this moment, twins are born. He used the method CCR5 (Chemokine Receptor type 5) which is a protein and important co-receptor for HIV, what people normally feature in their own body. By the use of IVF (In Vitro Fertilisation), and CRISPR Cas9, Jiankui gene-edited the DNA for immunization of HIV, before the embryos were fertilized with sperm from the HIV infected father. The twins are already born and are so called ‘healthy’, by the scientist.

Yet, the gene-editing of the twins by Jiankui possibly have been not that innocent as people thought this was. Because, a recent research, from the journal Cell, announced a few days ago that the protein CCR5 also has affected the brains to have more intelligence and that it improves a fast brain recovery after a stroke. Even when a person misses a small copy of the CCR5 gene, they perform better at school, and have a higher IQ than someone who consist of this gene. To sum this up, it means that the born twins are not only prevented for HIV but also have an improved memory, where the scientist did not talk about in his exemplifying video’s on Youtube.

To move on the the point about what you actually think about gene-editing, CRISPR and all kinds of difficult forms of this, I created an infographic to sum up a few positive and negative aspects to consider, before actually concluding your opinion. 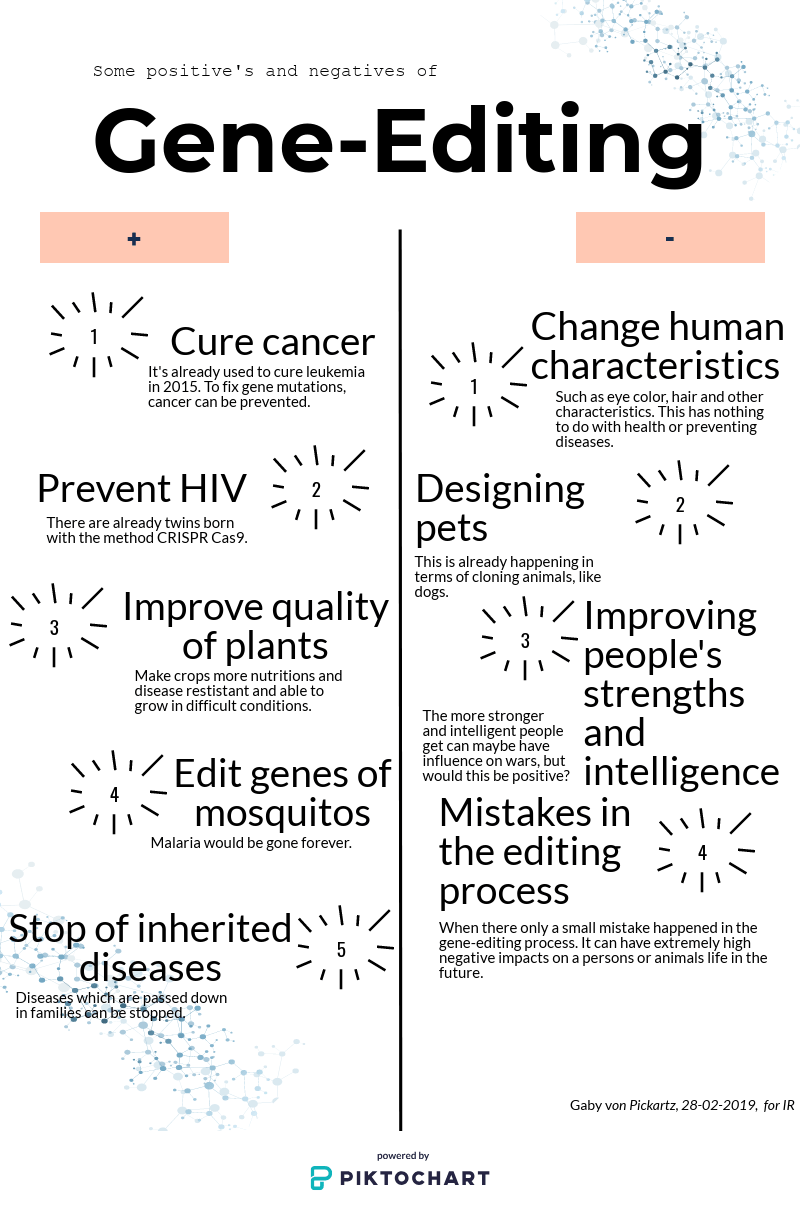 I think it is clear now that this topic is really happening and that we may have to concern ourselves about our future kids or maybe the children from ours. Just put your own pros and cons in the opposite of each other and relate this back to the thoughts you had in the beginning of reading this article. Do you have another opinion about gene-editing now? And if you may not be concerned enough, think about a world where people design their babies, there would always be people who don’t choose for this option. This would create a world where there are people which are briefly ‘perfect’ and people which then are seen as ‘failed’. Would this look nice to you?