In most parts of the world it is not easy to be a woman. In many ways males are privileged, in the labor market and at home for instance. Recently, there are lots of developments regarding rights of women. However, some countries just do not seem to get it. A great example: Turkey. At first Turkey seems to do great. They are implementing new laws and feminist movements and are fighting for women in the Turkish society. In the past eighty years they have made radical changes and a lot of them under supervision of the Islamic president: Tayyip Erdogan. Unfortunately, in reality many men have mentally not changed and do not act according the new laws. How is it possible that women are not treated equally even though men and women are declared equal?

To give you a small overview of the recent developments that the Turkish society has been through (a timeline is given below). An important implemented law, described below, is from 1934 where women received the right to be elected into the Turkish parliament. This might have influenced the laws and women’s rights later on in the future. Another important change was in 2002, when many laws were equalized for men and women.

There is constantly a conflict between traditions, values and habits and the modernization of those. Family honor is still considered very important. Nowadays, women who try to be equal to their partner, probably get resistance of their husband. Men and women equal to each other? I don’t think so… Traditional structure in the society is very important and those mindsets are probably the main cause of gender-inequality. Often women are trapped and seen as housewives, the division between men and women is very clear. Many women are nowadays still being abused. How can we make sure that the mentality of the Turkish society changes?

I would personally think that Islam plays an important role. Oppressed and subjugated are words that come up in many minds when they think of the Islam. However, research shows that over 1400 years ago the Islam gave women many rights. Women could marry someone of their choice, follow education, work, divorce, etc. Furthermore, women dress modestly to protect themselves and that they are being valued because of their character and personality instead of their beauty.  So the Islam might not have direct influence on women but I do think that there are many unwritten rules which impact the daily life of women. In the Western world many girls walk alone, in short skirts and uncovered shoulders and that is overall accepted. In Turkey this is just not done, even not in the most modern cities. It is scary that people believe a girl will get raped if she walks around like that.

Another great example; education. You would expect that every women goes to school and continues until they start working. Besides, there is a law that declares women can go to school. However, as I mentioned before many women should take care of children and should do housework. Luckily, this thought is decreasing, so the number of women going to school increases. The women that do go to work often receive lower wages, since they have 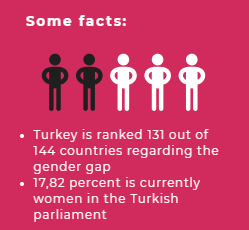 lighter jobs. The report ‘The role of women in working life in Turkey’ describes how women work in lighter jobs to protect them from harm. In this way they would still be able to fulfill their job at home. So even the women who go to work are treated differently. Especially the women who have a managerial position, this is again connected to their responsibilities and position at home.

There is probably not a specific method to change the mentality in Turkish society, since this is how it has been for many years. According to the Global Gender Gap report of 2017 Turkey is ranked on place 101 out of 144 countries regarding educational attainment. If more women can increase their literacy, they might become more aware of the current situation. In addition, women can work more and pull themselves out of that structure that everyone is so attached to. It is very important that every country gives enough attention to gender-equality. Fortunately, awareness of this problem is rising and many NGO’s and action plans are helping to stand up for women. This is a very common problem, which in the 21st century it shouldn’t be! Will the Turkish society ever change?

Thank you for reading my blog and please leave some comments below! Think for yourself about how the society might change and what restrictions women daily face.