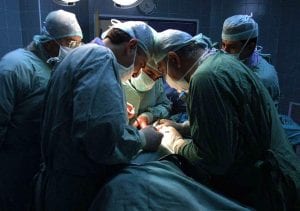 Selling your kidney for money to pay off your student debt, going on that awesome holiday you have always wanted or simply because you want to have a lot of money, we have all thought about it right? Luckily for us, we never had to think about it seriously (I hope). Sadly enough, this is not the case for people that are less fortunate and need money to survive and are willing to go to extreme lengths for it. These people can be for example be refugees or people from really poor countries that struggle to survive everyday.

According to Moorlock, almost 400 UK citizens have received an organ transplantation in the last 16 years and it is hard to determine which ones were legal and which were not. The scariest part about it is that these are just the cases that are known because of some transplantations no records were held. In addition, he also states that up to 10% of all the world wide organ transplantations include a form of payment and is therefore deemed illegal by the declaration of Istanbul about organ trafficking (2018).

The declaration of Istanbul on organ trafficking and transplant tourism

This declaration was an initiative by the World Health Organization that called upon all the nations across the globe back in 2004, to tackle any form of illegal organ transplantation and take aligned and appropriate measures on this. The declaration itself took place in Istanbul in 2008 and involved 150 representatives from scientific and medical bodies originating from all over the world. This declaration gets updated on a regular basis and deems organ commercialism and organ tourism as highly unethical and inhumane (Participants in the International Summit on Transplant Tourism and Organ Trafficking, 2010).

Organ trafficking is extremely unethical, or is it?

I think that most human beings agree that selling any part of your body is an absolute last resort to survive and the international community should therefore fight this phenomenon because no person on earth should have to sell their organs just to make ends meet. However, there are also voices in medical world that would like to make organ trade legal, also for ethical reasons. How is this possible you may you ask? This is because of several reasons, the first is the fact that there are very long waiting lists for people that need an organ transplantation. The amount of organ donations do need meet the needed amount of organs for people that need one to survive, this causes people that desperately need an organ to be on the waiting lists for years with all the problems that come with it and in the worst case scenario even death by organ failure. Another argument for the legalization of organ trade is that it could protect the original owner of the organ because the medical procedure can be done under safer and more hygienic circumstances. Currently, when a organ is being harvested so to say, the middle man or woman that will sell the organ to the person that wants it, will most likely not care too much about the person who he or she will take it from and will just want it to be done as quick as possible without caring about the health of that person afterwards. If organ trade would be legalized, the government could step in and protect the original owner of the organ and offer decent circumstances during the medical procedure. In addition, legalizing would arguably lead to a fairer price for the organ and more important for the original owner of the organ since there no longer would be a middle person that will take an unfair amount of commission. Several prominent figures in the organ transplantation industry in the United Kingdom promote the legalization of organ trade because of the previously mentioned reasons which combined basically conclude that in the current world everyone benefits from organ trade except the original owner of the organ. A final argument the pro-legalization side gives is the fact that the international community is failing to battle organ trafficking and is not expected to do so in the future. Because of this it would be better for the people that are so unfortunate to have to sell one of their organs, for the government to step in and control the organ trade rather than fighting it, how unethical this may be (Laurance, 2008).

Thank you for reading this article, do not be afraid to leave a comment with your thoughts!

p.s. Tried to add a poll so people could vote whether they think organ trade should be legal or not but my computer skills proved to be even more limited than I thought. For that reason I would like to call upon any computer genius reading this to please add a poll in the comments. Thanks in advance!

Moorlock, G. (2018, July 14). A look inside the murky world of the illegal organ trade. Retrieved November 2, 2018, from https://www.independent.co.uk/voices/organ-trade-dealing-donation-illegal-black-market-donors-transplants-a8461216.html

Participants in the International Summit on Transplant Tourism and Organ Trafficking. (2010). The declaration of Istanbul on organ trafficking and transplant tourism. Saudi Journal of Kidney Diseases and Transplantation, 21(1), 138–147.