When people think of Indonesia, they think of beautiful beaches, clear oceans, numerous islands, a chilled out lifestyle, and so on.

These facts cannot be argued with. But one significant detail is often overlooked.

Indonesia ‘sits along a volatile seismic strip called the ‘Ring of Fire’ in the Pacific’. (www.gov.uk) Therefore the state is geo-physically vulnerable, due to having 126 active volcanoes. 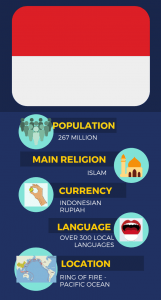 On 28th September 2018, a 7.5 magnitude earthquake hit the Indonesian island of Sulawesi, with most damaging hitting the city of Palu. Current figures, as of the 9th October, stated that the death toll had exceeded 2,000.

The devastation of such scale is shocking, how was it allowed to get this bad?

Indonesia is located on the Ring of Fire, where natural disasters occur so frequently and in such a technologically-advanced era these disasters are much more predictable. You would also assume that after such a catastrophe as the one that occured on December 26th 2004, Indonesia would be much more prepared.

So I repeat myself – how was it allowed to get this bad?

‘5,000 kilometres of coastline and more than 266 million inhabitants living on 6,000 islands, many of which are among the most remote in the world, where cellphone and internet coverage is rare.’ 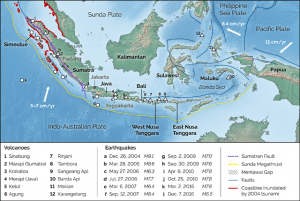 The World Bank has estimated that 40 percent of the country’s population, or around 90 million people, are vulnerable to disasters.

It is understandable that the whole population cannot leave the country just based on the fact that there might be a natural disaster, it is not worth giving up your whole life for something that only might happen.

So where is the balance? Is the state of Indonesia protecting their people from these potential atrocities.. how?

What is/isn’t the government doing?

Considering that it is Southeast Asia’s largest economy, in combination with being located on the volatile spot that it is, you would immediately assume that Indonesia has invested in infrastructure.

What makes many countries much more fortified against the threat of any natural disaster, but most particularly earthquakes, is their level of infrastructure. The stronger the buildings, the less likely to collapse under pressure.

Yet, in 2018, the Ministry of Public Works & Housing only recorded a 13.97% rise in infrastructure spending, while the Ministry of Transportation reported a 12.3% increase. (Indonesia Investments, 2018). This low spending creates weak infrastructure, merging with high numbers of population thus creating a basis for there to be more casualties than there should be, as it requires a smaller amount of pressure for a building to collapse. 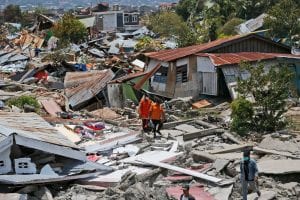 Not only does the lack of infrastructure make destruction more inevitable, it becomes extremely hard for rescue teams and authorities to reach affected areas. Roads torn apart by the power of the earth have created literal roadblocks, as such some areas in Sulawesi had no aid or contact with anyone for three full days after the earthquake. (Voa News).

Of course, it does not make sense to constantly invest large amounts into the infrastructure, with such a high risk of frequent natural disasters immediately destroying it. However, there is a difference between making structurally sound, or structurally weak buildings.

Economically, Indonesia is growing, and at a strong and steady pace. For 2017, the country’s GDP rose to 5.1% – the highest growth in four years. (World Bank, 2017). Following this, it continued to rise to 5.3% in the second quarter of 2018. To keep up this economic and social development, it is necessary for quality and quantity of infrastructure to improve.

According to Triyono, the BMKG’s head of earthquake and tsunamis, whilst Indonesia has 170 earthquake sensors, they are only provided with the maintenance budget for 70.

Furthermore there are 22 buoys in the ocean, implemented following the 2004 disaster with the hope of ‘shaving valuable minutes off the response time’, yet by 2016 all had stopped working, and have still not been repaired.

Prior to the Sulawesi earthquake and tsunami a warning was issued by the BMKG, warning potential waves of 0.5-3 metres. When destruction hit the beach of Palu, waves of 6 metres were recorded. In spite of the fact that the warning was lifted after just 30 minutes, it has been officially stated by BMKG’s chairwoman, Karnawati, to have lasted until the last wave reached land. (BBC, 2018). 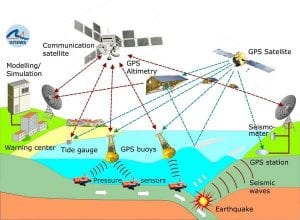 Automatically, one may place blame on the government – why do they not forbid living in danger zones? Or, why do they not force evacuations? Although these questions may come up, it is not 100% where the blame should be directed.

Simply put, it is not as easy as it may look! Many local residents actually refuse to leave their homes. To many of us this sounds stubborn and absurd, however, we do not have to live with this constant ‘fear’/risk like they do. For many Indonesians, they live and work on their land, so it is their only source of income. Therefore they have come to accept a ‘wait it out’ attitude. Naturally, it would not make sense to leave and is not an easy or immediately sustainable decision to make, to up and leave your livelihood at the sound of a warning, only when it becomes an emergency. 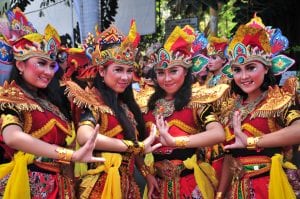 According to the Bangkok Post, Indonesia was initially reluctant to accept outside help, insisting that its own military could handle the response. UN pledged $15 million to the relief effort.

These extraordinary sums of money should not be looked at lightly. They are amounts which could do so much good, such as developing the warning systems and infrastructure. 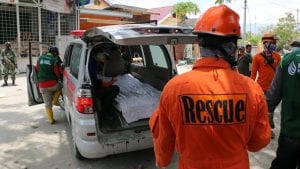 From a personal perspective, it amazes me that Indonesia receives so much foreign aid. As a rapidly developing country, Indonesia has a strong President who constantly appears to be improving the state of the country, yet the money received could be used alternatively and in ways that, although costly, would further develop the country and make it stronger, even with its vulnerable and volatile location.

Wondering where such money goes, eventually leads to the topic of corruption.

Corruption is present in all three branches of government in Indonesia and is one of the major constraints on capacity of the political leadership to govern effectively. – Transparency International

Knowing the level of such corruption in Indonesia, it is important to assume that a lot of money and aid which Indonesia receives is not appropriately used. The Indonesian President himself stated that the force against corruption needs to be intensified and has publicly declared his support for the anti-corruption agency, the KPK: “As an institution that is highly trusted by the people, it must be strengthened to accelerate corruption eradication [efforts]”. (Tempo Co, 2017).

If you would like to know more about the corruption in Indonesia specifically, here is a video that briefly encompasses it.

Before I go, I will leave you with some questions:

Leave comments down below, it is a safe space to share your opinion!