Worldwide the trade of resources, materials, products and so on is going on 24 hours per day and 7 days a week. Unfortunately, not only products, resources and materials are shipped in Japan, I’m speaking of humans here. People are being transported, recruited, transferred and exploited every single day worldwide. It can be considered as “modern slavery”, while all countries claim that slavery doesn’t exist anymore nowadays. But what would you like to call it then? If a person is recruited by use of force or coercion and afterwards ends up in forced labour. In this process the dignity, value and rights of a person are completely gone, since another person now has gained total power over you. Think of this happening just now, can you imagine that?

Estimated numbers by the United Nations Office for Drugs and Crime (UNODC) show that worldwide 51% of identified victims of trafficking are women, 28% are children and 21% are men. 72% of the people that are exploited in the sex industry are women. Japan has been a major destination for human trafficking, especially into the sex industry. Mostly woman and children from, for example; China, South-Korea, Southeast Asia, Eastern Europe, Russia and Latin America, are trafficked to Japan for commercial sexual exploitation. There are however not only foreign victims, Japanese women and girls are also targeted for being exploited.

The amount of identified Japanese and foreign victims of human trafficking in 2017 is a total of 42 victims. This number includes 18 high school girls who were forced 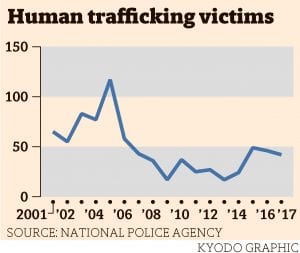 to perform in pornographic videos after applying online for jobs as models  There was a total of 23 Japanese victims and about 80 percent of them were minors. The youngest was a 12-year-old girl who was forced to work in a massage salon. Foreign victims were originally from Thailand, the Philippines, Vietnam and Brazil. Most of them were working at massage salons or had to offer sexual services. The intention of going to Japan is the hope of getting a well-paid job.

Many trafficked victims seek help from the authorities, for fear of revenge from their traffickers, who are very often related to Japanese crime organizations, called the Yakuza. The Yakuza is a combination of different kind of crime organizations. In Japan they control most of the cases where trafficked girls end up, but they are more likely to purchase people rather than transporting. Why on earth would someone like to buy and sell other people? 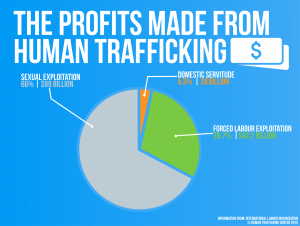 The main reason is of course money. Worldwide the total amount of profit that is made in the sexual exploitation business consist of $99 billion.

I found an example which draws a picture of the annual salary of a “pimp” in Japan. A gang member of Matsubakai (part of the Yakuza) “owned” 30 teenage girls and sends them each to hotel rooms for 20.000 Yen and he takes 5000 Yen himself per girl. In the end he nearly made 6 million Yen in eight months.

The most shocking is what people are willing to pay to contribute to the sex industry. In this case there are two contributors, the “pimp” and the person who is willing to pay to have sex. They both make sure this specific industry exists and due to supply and demand it still keeps on existing.

The role of authorities

In the last decennium the government in Japan recognized the problem of human trafficking. Authorities uncovered 46 human trafficking cases in 2017, including two from the previous year. There was a total of thirty suspects, including 25 Japanese nationals, they were accused of violating Human Right laws.

The Japanese government meets the minimum standards for eliminating the trafficking issue. One important establishment to do so is a new interagency taskforce to fight child sex trafficking in Joshi Kosei, also known as high school girls or “JK” businesses, these are dating services connecting adult men with underage girls. Although the government meets the standards, authorities continued prosecuting traffickers under laws which sentences are way too low. Many cases that are suspected of child sex trafficking and forced labour were addressed with administrative punishments or loss of business licenses than through criminal investigations.

According to an article from the ICECI University in Colombia it is important to know that the Japanese have a history of human trafficking and the sex industry. During World War II, it was believed that women were necessary to win wars. That is why the Japanese government used “comfort women” as part of their military strategy. Since this happened in the past it means it is right to continue using women as (sex) slaves? No, of course not. Shinzo Abe, Prime Minister of Japan, replied compassionately to the “comfort women” issue with:

To help, support and offer housing to victims there are several non-governmental 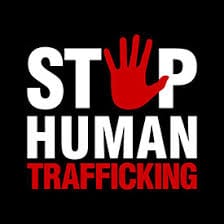 organizations established. Some of them offer shelter to foreign victims before being deported to their home country. The reason for deportation is because the Japanese government recognizes these women as illegal, for entering the country with a fake identification, overstaying their visa limits and “working” illegally. Other establishments make sure that survivors deserve a fair amount of resources and care to recover fully. There are also organizations who make sure that social workers are trained to analyse the elements of sexual violence, as well as understanding the physical and psychological situation afterwards.

This topic is something that everyone should be aware of, because it still happens right under our noses.

Japan records 42 victims of human trafficking in 2017. Retrieved from:

Human Trafficking and the Sex Trade in Japan (2014). Retrieved from:

Trafficking in Persons Report (2018). Retrieved from:

Asian Network of all Women’s Shelters. Retrieved from: