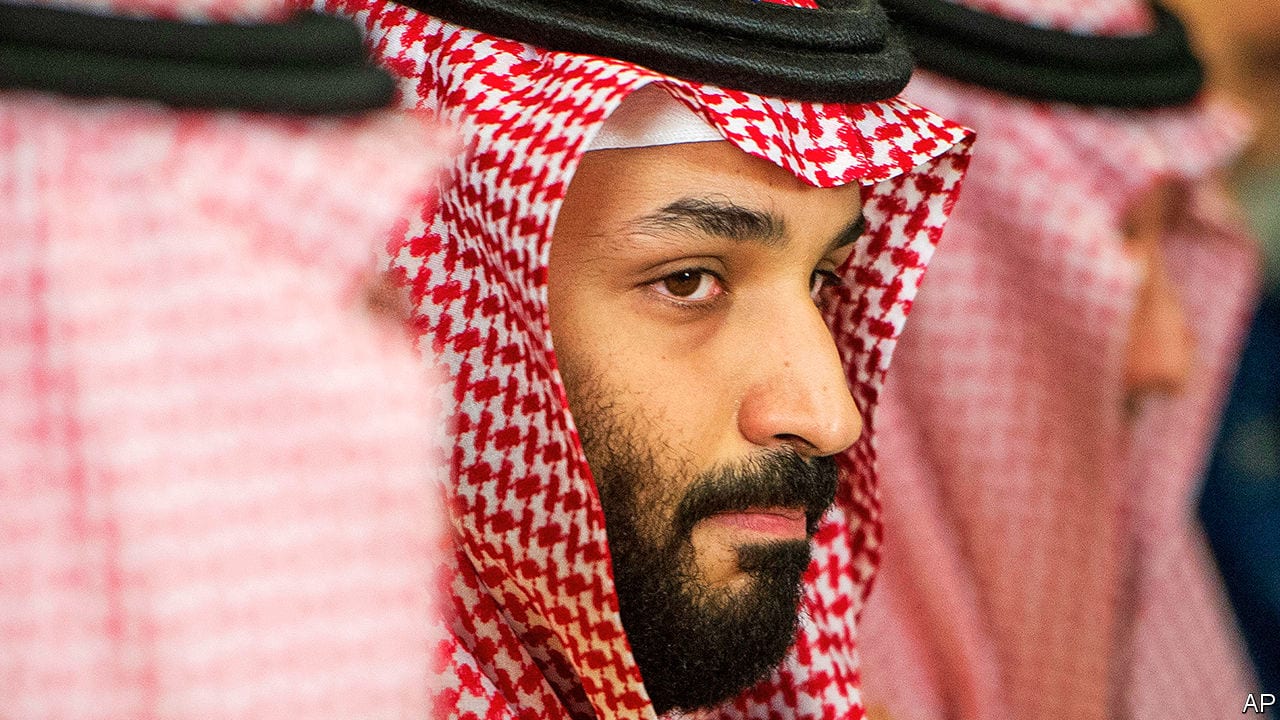 If you may not be familiar with the recent Saudi regime developments, or just want to revise your memory, click on this Youtube video or take a quick look at my previous post, as the current blog post is a sequence of the first one.

Since the coming to power of the 33 year-old Crown Prince, Mohammed bin Salman, the kingdom of Saudi Arabia is under constant reforms and in the worldwide media. Whether it was for the unique way of MbS’s ruling of the country, the ambitious 2030 Saudi Vision, the social reforms regarding women’s rights in the Saudi society or the recent openness of the Saudi regime towards the external world, Saudi Arabia has made its presence clear in the world. One recent occurrence put Saudi Arabia on the map and undoubtedly changed how the world is revolving around the kingdom. Yes, you are right. It is the Jamal Khashoggi’s brutal and suspect murder.

Now for those of you who might search for a detailed and chronologically aligned explanation, here is a visual guide of the Saudi journalist’s death. 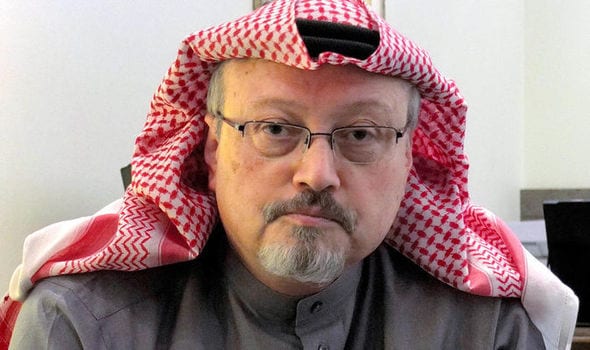 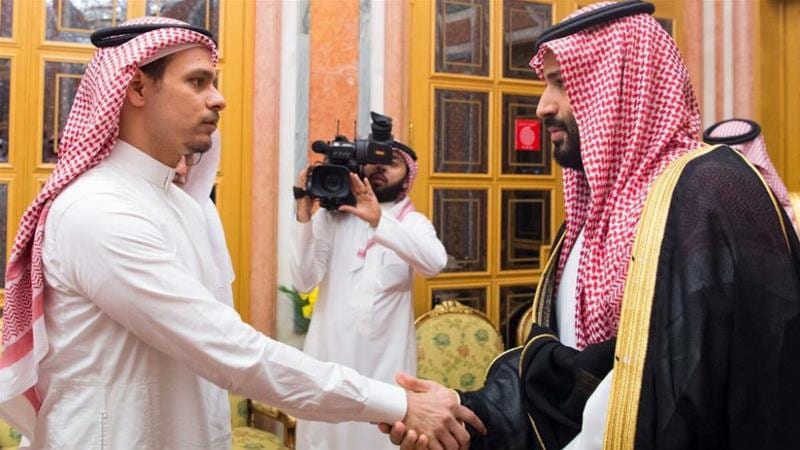 Who is responsible for Khashoggi’s death?

I´m sure that the first thought of the majority of you was: Saudi Arabia. I´m right, aren’t I? However, things aren`t what they always seem to be.. After all, even salt looks like sugar!

In this manner, I would like to introduce you to some hypotheses of who might be behind this brutal murder. Please keep in mind that there are research limitations which undoubtedly have a considerable impact upon the presented perspectives  and continue digesting the information with a grain of salt!

The death of a Saudi born journalist who resided in the United States of America and continuously criticised the decisions and condemned the Saudi regime high repression may be a message sent by the future king of the oil giant not only to its own nation, but to the whole world.  With the significant censorship in the kingdom and the autocratic policies of the new leading regime, MbS is portraying his power in a very visual manner. To the outside world, the young Crown Prince might be saying that Saudi Arabia is ready to fight for what it believes in and that they have the abilities and means of achieving their goals no matter who supports them or not.

Nonetheless, after investing millions, time and effort in numerous foreign visits with the aim of attracting the credibility and support of multiple leaders of the world superpowers, why would MbS jeopardise his own reputation, credibility,support and power? Could it be just a really bad political move? Even if MbS would want Khashoggi dead, why wouldn’t he use his endless funds (not necessarily money..) to conduct a discreet operation and “take care of the situation”?

You might have already discredited this option already, but please keep on reading, it gets interesting, I promise! When it comes to family and power, the circumstances get 39776523 times more complicated.

I truly believe that the mankind should learn from history and its failures/successes. Thus, I would like to quickly bring back the Cuban Missiles Crisis of 1962 and its circumstances which on the surface look plain and simple. In theory, democratic USA vs. the social communist Russia (USSR). In practice however, there were multiple actors in each of the parties which did not always agreed on the same agenda. From the USA party, it was a pure power play between the president of the USA, back then, John F. Kennedy, Central Intelligence Agency (CIA, the military governance and other smaller fractions. Fortunately for the humankind, John F. Kennedy successfully managed to handle the internal crisis and make his option – settle it with peace, react and not act- the accepted one by the USA.

With this example in mind, I want to remind you of one last aspect, which it is mentioned in my previous article – feel free to check it out here – the famous 2017 Saudi Arabian purge. This anti-corruption campaign was lead by none other but the Crown Prince himself, and in which 500 arrests have been made, out of which 50 royal family members have been included. The outcome of the crackdown was the regime recouping of $100 billion from various crimes such as theft, bribing and lobbying.

Some people advocated that it could have been a “true” anti-corruption campaign, if the Crown Prince himself were to be among his royal blood relatives being detained in the posh hotel prison. A year has passed since then, and apparently it is all water under the bridge for the royal family. In fact, one of the world’s most affluent billionaires, Al-Waleed bin Talal mentioned in an interview, does not condemn in any way possible his relative’s move and restates his close and positive relationship with its nation’s regime.

Nevertheless, many people cannot help wonder if this political move of MbS trying to seize the whole power in its own hands, might have brought along strong emotions of resentment between the royal family members.

Could the Khashoggi case represent a meticulously planned move to destroy the Crown Prince’s reputation and power stability? After all, 18  Saudi nationals were arrested, and 5 top officials fired since the outburst of the case. What is more, a close advisor of MbS, who is believed to be the “right-hand” of the Crown Prince, has been fired with no explanations given.

If you thought that the second conspiracy theory was improbable and unlikely to occur, then I wonder what you are going to think about this one.. Sound below in the comments section!

In the past decade the number of disagreements between states on certain matter has exploded (mainly due to the coming of power of certain individuals). However, USA‘s efforts to persuade Iran and Afghanistan to do what they want may have sparked some ideas. The terrorists attacks of ISIS have definitely changed the worldwide security perception in many parts of the globe. The wars in Syria and Yemen are also actors in this overview. The Kingdom of Saudi Arabia is situated somewhere in the middle, discreetly playing its role.

Now that you made it until here, I am really curious to which direction your mind went to. Do you think the Saudi Prince is just being overconfident and irresponsible? Might there be more than sees the eye? Leave your thoughts below, the other readers might actually share the same opinion as you do!

WORLD’S REACTION TO THE KHASHOGGI’S MURDER 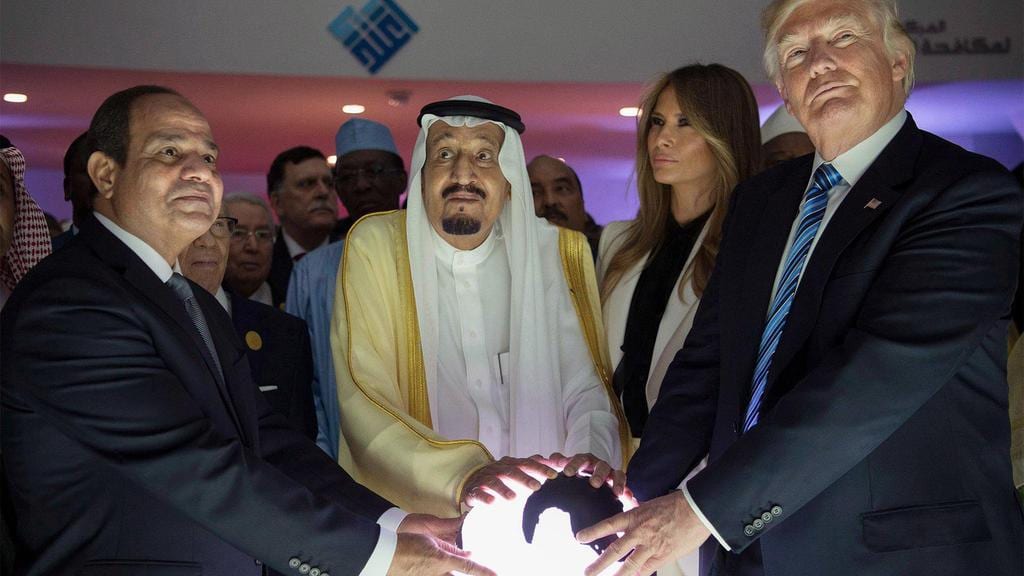 Words and words.. Some of us are still waiting for actions!

A lot of countries and superpowers have been publicly condemning Saudi Arabia for the killing of Jamal Khashoggi, but how many of them  have actually supplied and still supply the kingdom with weapons, arms and high war technology? Out of those who claimed that measures will be taken against Saudi Arabia, how many of them withdrawn themselves from their ALREADY agreed weapon deals with the Islamic Kingdom?

You might not want to hear this, but the most neutral state in the history of our world, Switzerland, has delivered 55 Trainer aircrafts to Saudi Arabia between 2014 and 2016 as part of a $2.5 billion deal. The aircrafts have ordered via a UK company, but the suppliers still stands as Switzerland, according to the Stockholm International Peace Research Insitute. 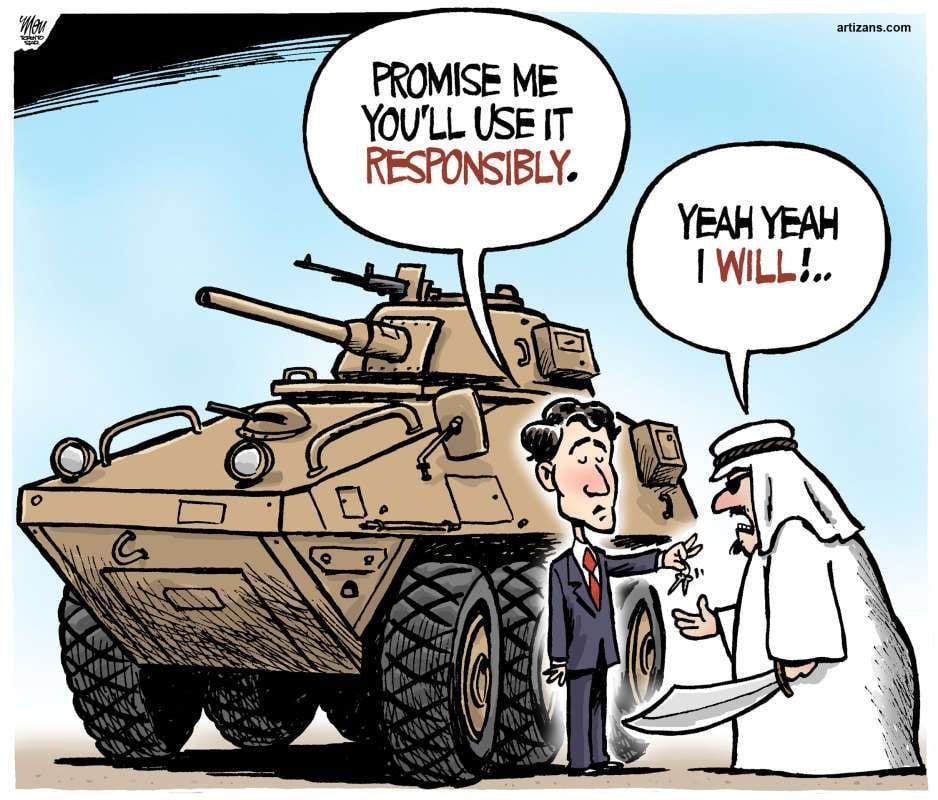 Earlier in September this year, the overconfident Canadian government strongly condemned the human rights issue in the Islamic State, calling for an immediate action. However, the mapple leaf-known nation found itself standing alone against the Saudi Kingdom, as none of the nations wanted to come to the stage and get involved in this situation. A month later, Khashoggi’s murder takes place, but Canada takes no immediate action for such a strong human rights advocator. The reason? A $12 billion military deal with Saudi Arabia. Now, Canada’s president must carefully weight the balance between money and life. It is unlikely that Trudeau will risk the deal, which comes with a lot of money and jobs security for the murder of a Saudi national. 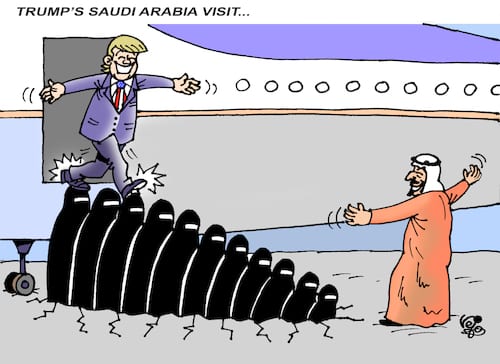 In May 2017, president Donald Trump and Saudi King Salman striked a whooping $350 billion arms deal over ten years, out of which $11o billion to take effect immediately. The weapon trade was made in hopes of bolstering international security “in the face of Iranian threats.”

Now, I do not know about you, but for me that is a lot of money and promised security. This current scenario reminds me a lot of the Cuban Missiles Crisis, which we talked earlier. Instead of Jupiter rackets in Turkey against the communist Russia (USSR) now we have a $350 billion weapon agreement with Saudi Arabia against Iran.. oh history..

Therefore it is clear that the USA is not going to freeze any arms deal with Riyadh any time soon, regardless of human rights or not.

In September this year, Berlin has agreed to export equipment worth more than $460 million to the Saudis this year. Angela Merkel, Germany’s “mother” has recently stated that the german nation halts future weapon deals with Saudi Arabia. This move  undoubtedly puts the other world leaders in quite an uncomfortable position.

Perhaps Angela Merkel should hold a human rights lecture to the other world leaders? 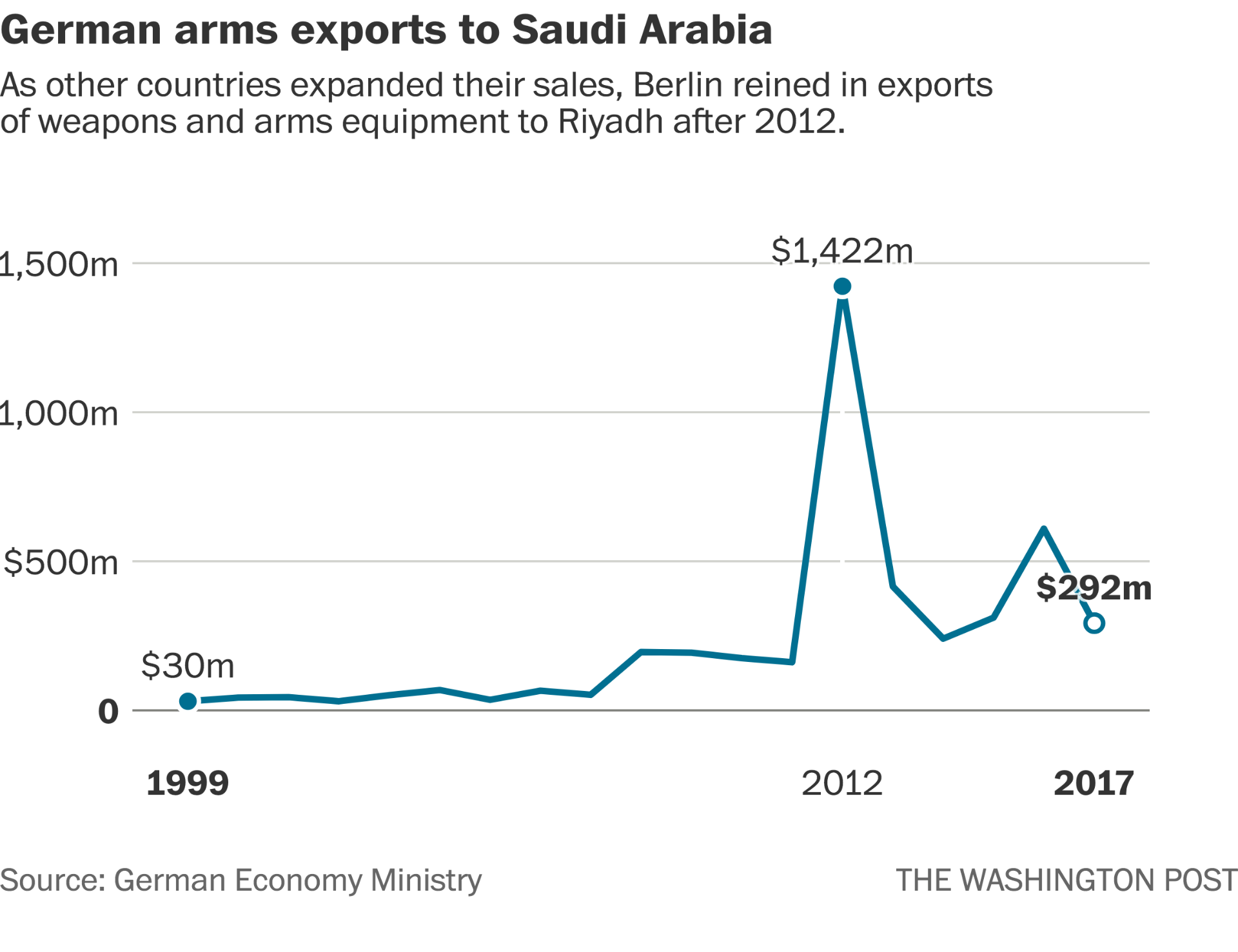 Back in early 2015, after the Saudi kingdom intervened in the civil war in Yemen, the UK signed a military agreement with Riyadh of a little more than £3.3 billion. This deal included £2.2 billion worth of licences for aircraft, helicopters and drones, and £1.1 billion for grenades, guided bombs and missiles.

Theresa May’s conservative government has so far been cautious about putting any sanctions that could endanger the delicate economy situation which UK finds itself into right now. Therefore, it is unlikely to see any British measures against the Islamic State. 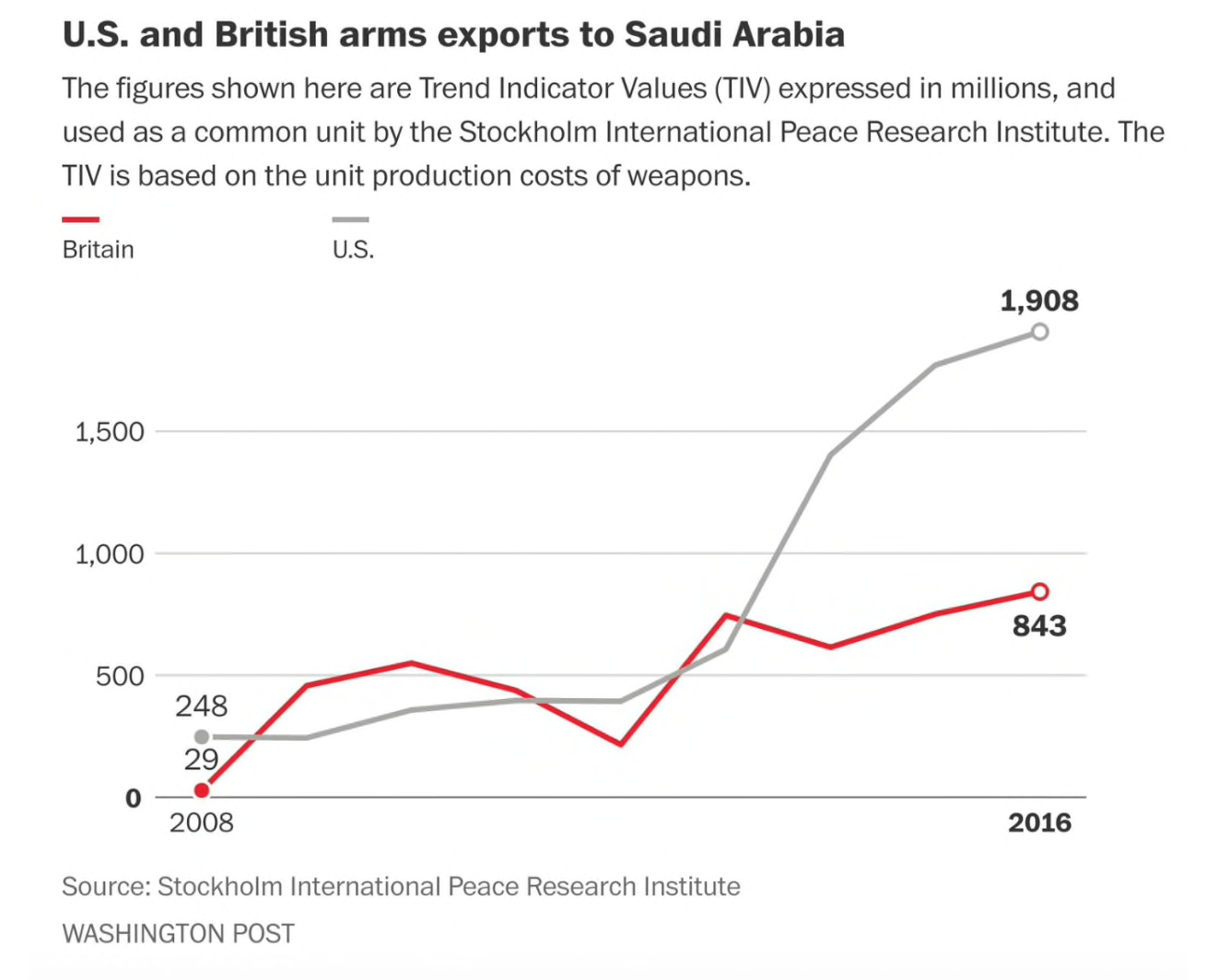 According to the Stockholm Institute of Peace Research Institute trade registers, between 2013 and 2017, Turkey supplied Saudi Arabia with weapons of $560 millions. At the moment, the weapon transfers between the two countries is not freezed yet.

Outside of the kingdom, the damage from this occurrence may last longer as the barbarity of the crime has already hurt MbS’s reputation abroad, turning former allies of the crown prince into stern critics of his policies. Millions of dollars’ worth of PR efforts to promote the crown prince as a reformer appear to have probably gone to waste.

Nonetheless, that doesn’t mean anything of substance will change. Ultimately, it’s highly unlikely that Khashoggi’s death will radically alter the kingdom’s foreign relations and regional role.

What do you think? Will Saudi Arabia face any real obstacles from the other nations? Will those measures be enough to reform the human rights in Saudi Arabia? Please feel free to vote at the two polls below, leave a comment and/or share this article! I am looking forward to hearing your opinions and thoughts upon this particular subject.

Who ordered the killing of Jamal Khashoggi?
Created with Survey Maker
Which country is most likely to withdraw from the arms deal with Saudi Arabia over the Khashoggi matter?
Make a quiz

Chu, B. (2018). Opinion: The West should be careful over sanctioning Saudi Arabia – but not because of fears over oil prices. Retrieved from https://www.independent.co.uk/voices/jamal-khashoggi-death-saudi-arabia-sanctions-trump-mohammed-bin-salman-oil-prices-a8605226.html

How will the Khashoggi case impact the reign of MBS?. (2018). Retrieved from https://www.youtube.com/watch?v=7MyDh9cZM2Y

Saudi Arabia’s alliances are being tested as never before. (2018). Retrieved from https://www.economist.com/middle-east-and-africa/2018/10/18/saudi-arabias-alliances-are-being-tested-as-never-before

Saudi Arabia’s alliances are being tested as never before. (2018). Retrieved from https://www.economist.com/middle-east-and-africa/2018/10/18/saudi-arabias-alliances-are-being-tested-as-never-before

Why is Saudi Arabia’s grip on the West so strong? | The Weekly with Wendy Mesley. (2018). Retrieved from https://www.youtube.com/watch?v=oafLt1eENbw