Have these words ever appeared on your mind? What do you think when you see these words? How would you define or name these word? They are trafficking.

Perhaps this incident might not happen in your life, and it preferably will never happen in your whole life. Because it can ruin your future and lead you into a sorrowful story never going to forget and recover. Human trafficking maul so many people, however, it actually appears and arises every day in every small corner of the world. Unfortunately, it cannot be stopped!

What is Human trafficking?

Human trafficking is using different ways of violence, deception or coercion, in order to recruit, hide or transport people into a situation which the people are forced and unknown. Therefore, in brief, trafficked people are not aware of what is happening at that moment and they have no choice and right to say no if they do not want to!

Where do trafficked people do? 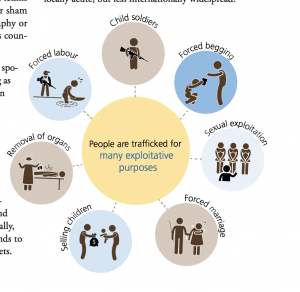 According to the data from United Nations Office On Drug and Crime, it is seemingly noticeable that the number of victims from human trafficking is constantly increasing in the last decade, additionally, it boosts yearly faster. The tendency definitely does not go optimistically. 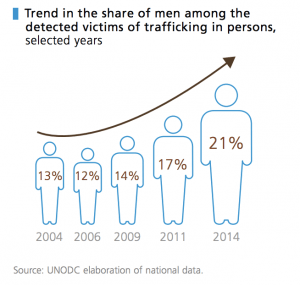 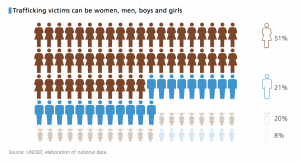 According to the data above from United Nations Office On Drug and Crime, we can see that that 28 percent of trafficking victims are children. Since the phenomenon increases every year, which results in more parents to have understandable fears and terror about their children being kidnapped and trafficked. There is no specific number about how many children are trafficked. However, the serious impact cannot be hidden.

Where are these trafficked children going?

There are thousands of possibilities. I personally hope they are going to a really nice family and obtain even better treatments. However, the truth is some of them are sent to do child sexual exploitation, asking for benefit fraud, forced marriage, making domestic servitude which includes cleaning, childcare and so on and so on. I am feeling so heart broke when I am sitting in a coffee shop with air- conditioners while reading this news. Why do these children need to suffer so much, some of them were even born in really nice families. They were supposed to have a happy childhood, good education, a nice relation and so on.

There is an interview of a Chinese child trafficked mom, she said the parents of trafficked children especially feel painful of heart in the winter season, since there are so much tribble images that are automatically coming into their minds. For example, their lost children are living with people who treat their children badly, so their children are suffering unbearably. They do not have warm food to eat, thick cloths to keep warm and so on.

Most of the children that are trafficked are under three years old, but everyone knows that children grow really fast, their appearances also change so fast. Their parents asked help to any relative organizations and show the photos of their children. After one year, two years, they don’t know for sure if their children still even look like the photos anymore, which continually adds difficulties for their parents to find them. How sad is that! Even if the parents go to official departments, they will find an unbelievable waiting line.

Should parents give up finding their children?

The children are missing in the big and mass world. If anyone can understand and image the helplessness.

China includes more than 22 provinces, five autonomous regions, four direct-controlled municipalities, and the special administrative regions. Where can they find their children? Where should they start? Where should they go in a 9,600,000 square kilometers country?

Parents’ life is totally messed up. Most parents give up their career life and try to find their children without any directions.

Some parents do not want to give up searching for their missing children, but life needs to be continued. They don’t know if they should have a new baby or not. Some of them cannot face their partner, so they choose to divorce. Some of the missing children lived with their grandparents, which results in their grandparents living in a super big regretting life until they leave the world, they feel really sorry to their children, since they think that the lack of good care resulted in what happened.

The main passion of writing blog is that, I would like to tell all of the readers how many people are influenced by a single child trafficking things, how much unfair life for the trafficked children.

I watched a film recently, which shocked me and affected me a lot. The movie called Dearest which was directed by Kexin Chen(Hong Kong, China), it is based on a real story about children trafficking incident that happened in China.

The main story of this movie is talking about a rural woman raising up a young boy who was trafficked by her husband. Moreover, her husband also lied to her about that she could not get pregnant and he picked up this child on the road. Therefore, the rural woman paid all the love and attention to the child. The birth parents of this child never gave up on finding him. They got help from the losing children family team or official departments. In the end, the parents found the child, but the child continually called the rural women mum. Even the rural women had no education background, but she tried to find a lawyer and did a lot of effort since she wants ‘her son’ can go back to her.

In this movies, every main character gets hurt, and they are innocent beside the trafficker.

After reading this blog,  please sharing and making more people notice this situation. If you have any idea of how to helping these trafficked families or preventing children trafficking, please comment under the blog! I appreciate that!

Additionally, Baobeihuijia(babies coming home) is the biggest official website for searching trafficked children in China, it has been helping 1379 trafficked children going back home in 2016. If you have any help or want to be the volunteer, please click this link.