“Turkey has never given up its goal of joining the European Union” Erdogan says in his speech that he gives on the fourth of May 2018.  From the twelfth of December 1999 Turkey is seen as an official candidate for full membership of the European Union. Since then, it has been a battle for Turkey to prove that they should be part of the European Union. In 2005 the first actions were taken and negotiations started. Unfortunately for Turkey, not every country shows a high level of support regarding the accession.

Benefits for Turkey when joining the European Union
But why does Turkey want to access the European Union?  There are many reasons why Turkey want to join the EU.  First of all, joining the EU could give economic stability to Turkey. This means that Turkey probably creates more trade pathways than they would do as an independent nation. Furthermore, the EU can provide economic support during a crisis, just as they did with Greece, for example. Turkey can also use the collective funds to improve the quality of life for citizens. 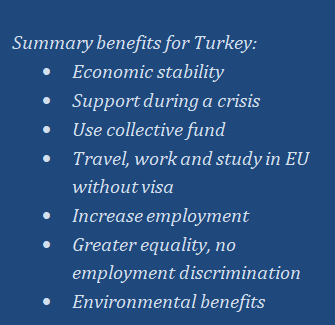 Besides the economic benefits, there are also social benefits connected to joining the EU. Turkish citizens would be able to travel to other countries of the EU. Working and studying in another country without having a visa or other documentary papers would not be a problem anymore.  This creates new job opportunities, since people are able to search for a job in different countries of the EU. On the 7th of February 2018 Kalin announced that Turkey has met all seventy-two criteria of the European Union to travel visa free. However, does this make everyone happy?

The EU wants to make sure that there is greater equality between citizens. This means that citizens will not be discriminated on for example, gender, religion, and disability when searching for a job.

All members of the EU share materials  and machinery that works more effectively and is energy efficient. Members of the EU also work together to reduce pollution.  As a result, Turkey would also have many environmental benefits. 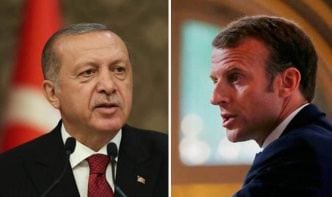 On the left: Recep Tayyip Erdoğan, On the right: Emmanuel Macron

The Deputy Prime minister of Turkey wants to speed up the accession and join the European Union within five years. This is going to be a challenge, since Emmanuel Macron suggested a partnership instead of membership of the EU earlier this year. According to the Prime Minister, Macron does not understand the realities of turkey.

Rejecting Turkey after accepting it as a candidate for membership could affect the credibility of the EU. Turkey is still seen as illiberal democratic. Accepting Turkey could lead to a full democracy, that is exactly what Erdogan needs.

Per capital income of the citizens of Turkey is very high at the moment. This could help bringing in new life in the EU’s economy. Besides, Turkey has 75 million residents, which means that 75 million consumers will be added to the market.

Last but not least, Turkey has a different culture, religion and history. It is all unique, however, also European! This is since the 14th century when the Ottomans crossed the Bosporus. Moreover, Turkey is Islamic. Accepting Turkey would mean that the European Union is open for the Islamic world. Turkey could become a model for other countries and therefore it could solve the Kurdish issue and the relations between Cyprus and Armenia.

Disadvantages for the European Union
If there are so many reasons for Turkey to join the European Union. Then why do many other countries of the EU not support this? Turkey is very big and has a population of almost 80 million, which is very hard for the EU to absorb and turkey will become the dominant member. Besides, Turkey is not situated in Europe. This can open doors for other non-European countries.

Turkey has not a democracy how we, the Western people, are used to it. Human rights are constantly being violated and many journalist have ended up in jail or have suddenly disappeared. Moreover,  women are not well protected, there is no freedom of speech, there are many unfair trials and I bet the list goes on and on.

As described in a previous paragraph the economy is growing in Turkey. However, the country is still economic underdeveloped. The GDP per capita is way below average of the EU. In addition, all the poor people of Turkey would immigrate to the West, while an estimated 10 million Turks are already living in the EU.

Turkey’s cultural heritage is European as described previously, but the roots lay in Asia and the Middle East. Almost the whole population of Turkey is Muslim, which causes huge differences between Cristian Europe.  Since there are so many wars of religion all over the world, I believe that accepting Turkey in the EU could lead to conflicts as well.

In my opinion, Turkey should not be accepted to the European Union. Turkey differs too much from the European Western world regarding 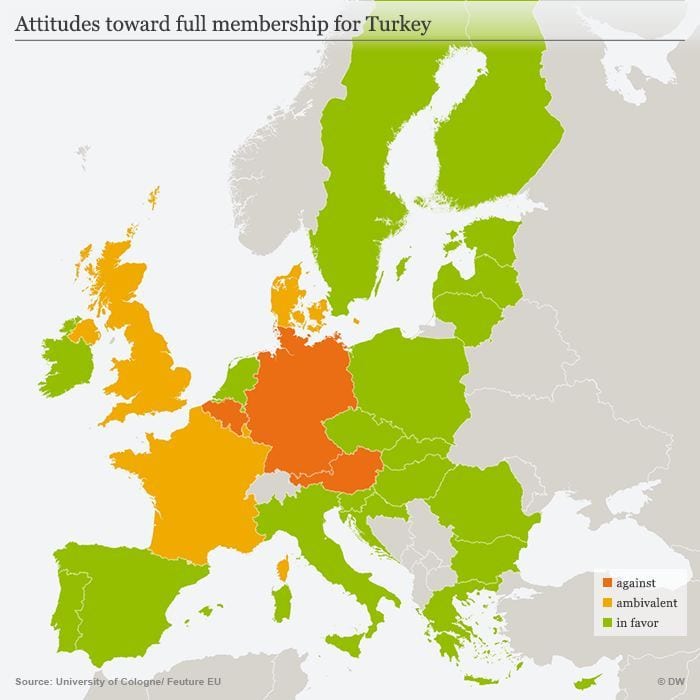 religion, traditions, politics and economy. There is a possibility that this leads to conflicts and I think Europe should not involve in their problems. I believe that Turkey will not join the EU very soon if I see how some countries react and are against full membership. On the right a map of 2017 is given, which indicates the attitude towards membership of Turkey. Most of the countries are in favor, a few are against and a few are ambivalent. How I see it now; Erdogan is very disciplined to meet all the necessary requirements and he will not give on his goal.

Will Turkey ever be accepted as a member of the European Union and will this benefit everyone in the future? Please comment on this blog and share your opinion!

Schuster, K. (sd). DW made for minds. Opgeroepen op September 25, 2018, van Turkey-EU relations: Which countries are for or against Turkish accession?: https://www.dw.com/en/turkey-eu-relations-which-countries-are-for-or-against-turkish-accession/a-40381533

Tuvan Gumrukcu, A. C. (2018, May 6). Turkey’s Erdogan says has never given up on goal of joining EU. Opgeroepen op September 26, 2018, van Reuters: https://uk.reuters.com/article/uk-eu-turkey/turkeys-erdogan-says-has-never-given-up-on-goal-of-joining-eu-idUKKBN1I70FV