Succes in Japan seems to lead to death

Everyone probably knows Japan from its famous cold dish of rice, fish inside and covered with seaweed, namely: Sushi. Japan is a country with wide contrasts, from the international capital; Tokyo to ancient castles, beautiful shrines and highly developed bullet trains. It is a high developed country with a lot of opportunities. Unfortunately, that is not the only thing Japan is well-known from, Japan is considered as a “toxic overworking culture”.

Some figures and facts

Japan is considered one of the most technological advanced societies of the world. It has the world’s third largest economy by GDP (Gross Domestic Product – defines the total market value of all final goods and services produced in a country in a given period of time) after the U.S. and China.

Japanese businesses have benefited from the rising global development because of the improving global economy. The stock market is rising high, even the country’s economic curse – persistent wage and price deflation – are in balance. The unemployment rate fell down to 2.4 percent in August 2018. Which is of course very beneficial for the country its economy.

Since we are now talking about a very low unemployment number, this is due to the fact that after World War II the government wanted to strive for 100% unemployment. This probably started the overworking in Japan. From the moment when the country switched its focus from strengthening their military to rebuilding its economy. “Prime minister said: we have to double the income and 100% employment.” What happens then, instead of the military is your family, the company becomes your family. You will do everything you can for your family, you will show devotion towards the company.

From that moment the country experienced an economic miracle, from the 1960-1980 Japan became the second largest economy in the world after the US. But in the meantime as the economy grew, so did the rate of Karoshi. Karoshi in easy words, means chronically overworking, which can result in death. In the western part of the world we call this a burnout, because Japan is not the only one struggling with this phenomenon. However, in Japan it can be considered as more extreme. This indeed became a huge problem in Japan’s society, right at the moment of pure success becoming the second largest economy in the 80’s. But what does success mean? Because this is leading to deaths. 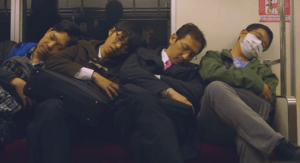 Sleeping business man in the subway of Tokyo

Religion or cultural thoughts can be influential as well

In Japan, a country in which Buddhism and Shintoism are the two most practiced religions, there is no specific belief in afterlife for both. The main thought of Shinto is ‘fitting in this world instead of preparing for the next’. This can influence the thinking of Japanese citizens in a way of wanting to do everything perfectly.

A group of people is more important in Japanese society than individuals. Maintaining group harmony, even if that will harm someone’s personal freedom, is considered very important. Japanese are also very conscious of how they are viewed by others. They are afraid of making mistakes and being different than others. Shame is a word that represents the Japanese (shame) culture. Historically seen when Japanese felt shame, they even committed suicide. That is the ultimate form of self-sacrifice. Suicide could be a demonstration of loyalty, a form of honourable execution and a generally acceptable way to clear one’s name of guilt. Both religion and the ancient Japanese culture can play a role in the thinking of why suicide can be seen as the only option left. 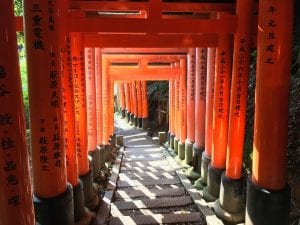 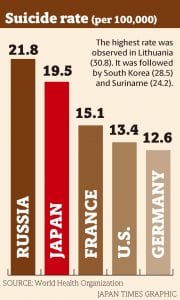 Japan has the worst suicide rate for a well-developed nation, with annually suicidal deaths averaging 19.5 per 100.000 people, according to the Ministry of Health, Labour and Welfare (MHLW). It has the fifth highest suicide rate in the world.

According to National Police Agency suicide statistics, the number of suicides in 2016 was 21,897 – 15,121 men and 6,776 women. The annual total has been dropping gradually after hitting a peak of 34,427 in 2003. However, the margin of decrease among younger generations is small compared to that among men in middle age or older.

Governments role in this tragedy 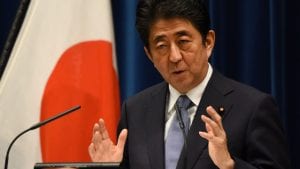 Miwa Sado, who worked for NHK in Tokyo, died of heart failure in July 2013. She had worked 159 hours of overtime with only two days off in the one-month period prior to her death. The government started to hang posters on walls and by organizing events, they tried to raise awareness. Many consider these actions as insufficient and too soft. There should be a clear set of rules and regulations about overworking and fines need to be put on companies who cross these lines. Otherwise nothing will change in the end, because her deaths is only one of the suspected thousands of deaths from overwork each year.

Karoshi has persisted for decades and again, the Japanese government did not really address the problem. However, after a 24-year-old woman, who worked 105 hours of overtime the month before and wrote on social media a couple of weeks before her death, that she was physically and mentally shattered and then jumped of a building to her death, they definitely had to. The government, led by Shinzo Abe during that time, proposed a maximum of 100 hours of overtime a month. However, that is still 20 hours over what the Ministry of Health, Labour and Welfare calls: ‘The Karoshi line’. More than 80 hours of overtime in a month may have negative effects on people’s health. One in five workers in Japan are currently at risk.

Supportive to this blog, please watch the video below

Retrieved on Wednesday 19th of September 2018, from:

Retrieved on Wednesday 19th of September 2018, from:

Retrieved on Thursday 27th of September 2018, from:

Retrieved on Thursday 27th of September 2018, from: