With the current geopolitical climate reaches the highest tension point after the Cold War, it is important to take a look on both sides of the scene. The recent war game between China and Russia showed the world that it’s time for the Easter superpowers to rise up again.

A rising power or A desperate alliance

With the recent sanction from the US toward Russia and China, it has created a new opportunity for these two countries to bond up to become heroes of bilateral cooperation and globalization. For many people, it is very controversial because the motive behind this friendship still lies in the dark, but compare it to the past, they have more to gain especially in the current geopolitical scene. As quoted from Mark Sleboda – Political analysis of Russia Today: “The US has economically, militarily and politically pushed and pushed and pushed China in the South China Sea, a trade war, tariffs, sanctions and the same things with Russia … They keep pushing and pushing and pushing, and they are doing everything possible to make the worst geopolitical nightmare.” In the future, this “alliance” will prove to be a potent contender of the Western World and the Democracy.

After the annexation of Crimea back in 2014, it has become a major turning point for the Sino-Russia relationship. Russia began to sell China advanced weaponry such as fighters’ jet and Surface to Air missile. Not only that, during that time, both countries signed a joint declaration “new stages of comprehensive partnership and strategic cooperation.”  China’s ambassador to Russia, Li Hui, told China’s official Xinhua news agency that Sino-Russian relations were at their “best in history.” The report also touted Chinese President Xi as a proponent of regional cooperation amid “anti-globalism and protectionist trends,” while ushering in a new age of diplomacy with Russia. The recent war game in Eastern Siberia is the most perfect proof for this claim, featuring more than 300,000 soldiers on the side of Russia and 3,200 Chinese troops, including Mongolian troops. Another example is the Eastern Economic Forum, which was held in Vladivostok, signalled that both China and Russia are working closer to counterbalance US “Unilateralism”. 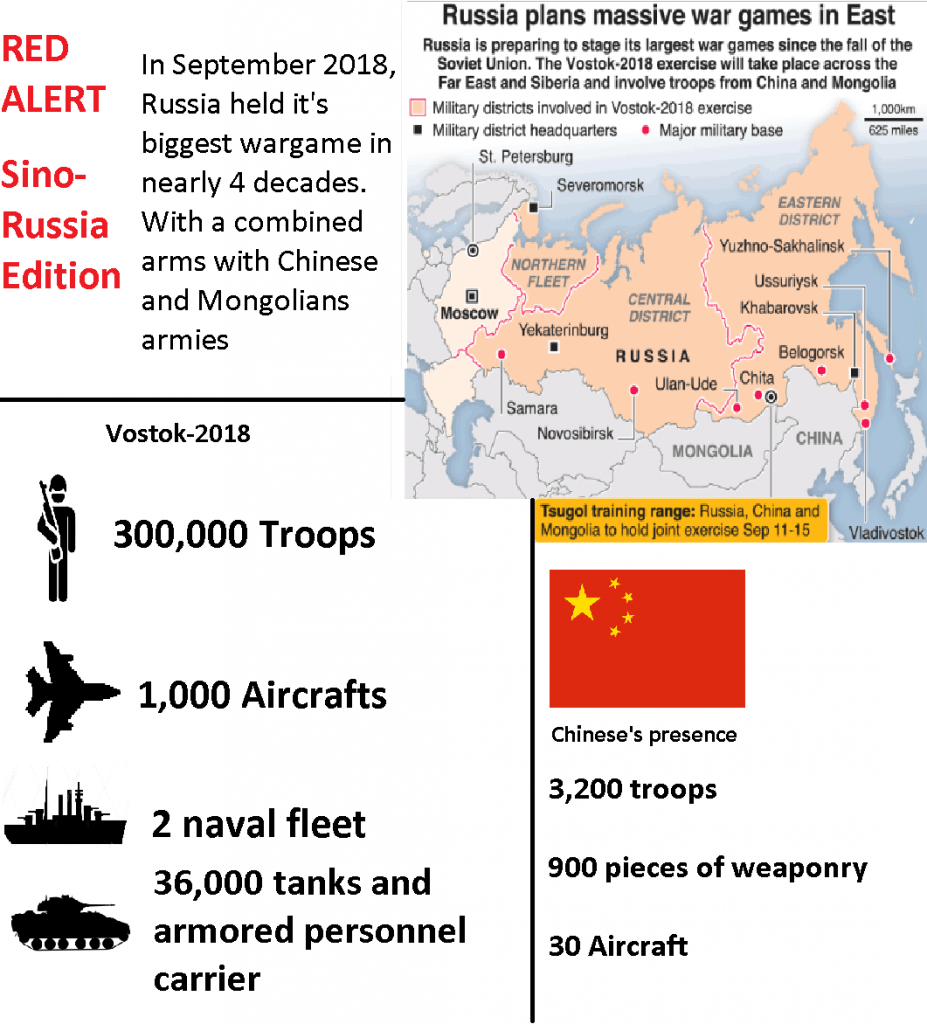 Even though Russia and China do have some differences and competition in the former Soviet Union Central Asia region. It should not be exaggerated. Vassily Kashin, an East Asia expert at the Russian Academy of Science: “What is much more important is the shared opposition of both countries to the US-led global order. Russia has irreversibly fallen out of this order after the Ukrainian crisis in 2014. By now China is also in systemic conflict with this order which is the cause for the current trade war.” The US foreign policy expert Angela Stent also wrote in a 2016 report published by the US- Based German Marshall Fund that China protects Russia from the full impact of the sanction opposed by the Western countries. President Xi of the People’s Republic of China left a remark which said China neither approve nor disapprove of Russia’s action in Crimea. It will only do so when it decided that it’s beneficial to do so. So, the question is what is beneficial for China to help Russia?

This relationship’s legitimacy is still to be questioned. According to James D.J. Brown, an associate professor in political science at Temple University in Tokyo, this relationship is only there for national interest. China at the moment is the second’s largest trading partner with Russia, only to be after EU. The annual trade will break $100 million by the end of 2018. Not only that, both are finding ways to cooperate in Central Asia, which is known as Russia’s backyard. Not only that, the Belt and Road initiative and the Eurasian Economic Union free trade agreement are the main topics at the EEF conference. Although words were spoken, there was no real struck that connect these initiatives. Feng Yujun, a Russia affairs expert at Fudan University in Shanghai: Because Russia is subject to Western sanctions, it is economically eager to get China’s investment, technology, and market access,” said Feng. “Russia needs to show a high degree of enthusiasm for the Belt and Road … Although China has long proposed an agreement to sign free trade zones with the Eurasian Economic Union countries, these agreements are nowhere in sight.” 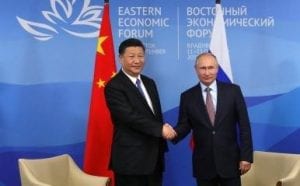 President Xi and President at EEF

Another limitation for these two nations to become alliance is pragmatism. “This relationship will prove enduring,” said Dr Brown. This is because of the common tensions toward the US. Although both proven to have a what is called Quasi- alliance which lacks elements indicating true merging of strategic interests. “For a relationship to be a true alliance, there must be some level of commitment to collective defence,” said Brown. As if of now, both countries still show reluctant to join the others conflict.

Who is to fear? The Bear? Or the Dragon?

At the moment, the biggest threat toward the US is Russia, but most of the strategist suggested that China will become a bigger threat in the future. Dr Brown said: “With the assistance of Russia, China is a much stronger power. Without Russia, China is a country without powerful allies”. This can be said about Russia as well. China is helping Russia economically, but Russia is still reluctant about this dependence relationships.

In conclusion, the current Sino – Russia relationship is in another chapter. There is a lot of positivity to look forward to, economically and defensively. Although we’ll need to remember this, this “quasi-alliance” is the result of the punishments from the US and the EU. Not only that, there is only a few commitment from both China and Russia toward this relationship. So the final question is this relationship desirable for anybody?