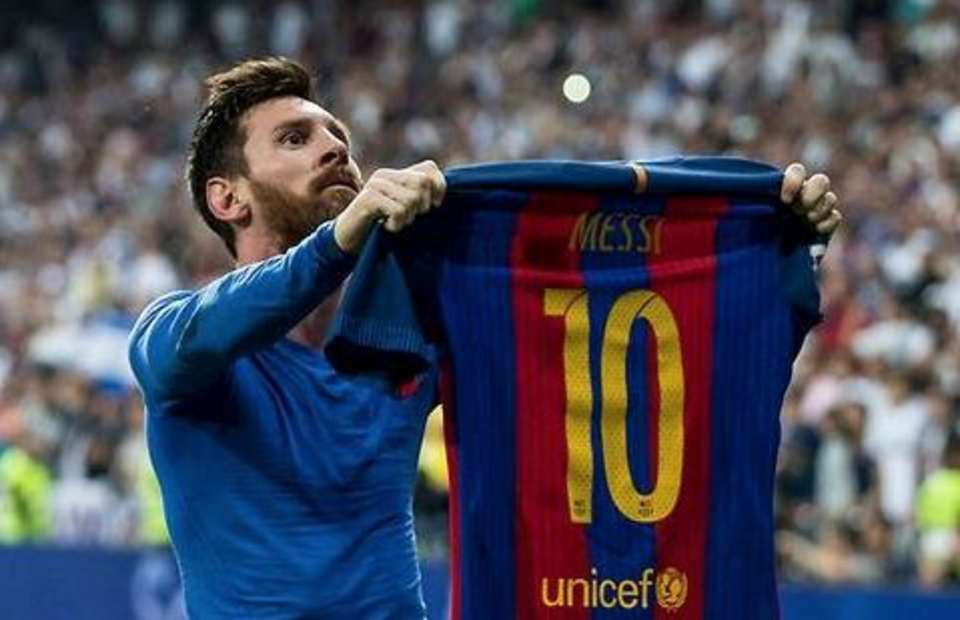 Football, or ‘soccer’ how the Americans would formulate it, is without doubt (one of) the most popular sport and the most watched sport in the world. It is also one of the sports where I am personally the most interested in, then any other sport. Therefore, I also follow the news about match results, Champions League or player transfers amongst clubs. For the last two years the news was full of acquisitions of clubs, insanely high transfer fees and ridiculous salaries for players. The amounts of money that are dealt with ‘the most important subsidiary of the world’ are insane. Marca (a Spanish sports newspaper) made up a list with the highest paid footballers in the world. Lionel Messi is leading the list with an astonishing amount of 40.5 million British pounds a year. Just to make this clear: that is almost 47 million Euro a year! Which is about 3.8 million euro a month! But, it is not only the salaries of the players I want to zoom into. Football nowadays is a real business with big money, it is also a tool for rich Arab Sheiks and Russian Oligarchs. As the matter of fact, a lot of football clubs in Europe are bought by such people for over the last ten years. As well as their influences on sponsorship contracts, player transfers, management deals and so on. The richest of the rich are investing in ‘their’ clubs like it is their own child. They also feel a need to grab a hold on other markets within Europe than only their own oil and gas markets. But as a football lover and fan I just wanted to know if it is really possible to actually win championships or trophies if you invest enough money in a certain club.

The amounts of money that are dealt with ‘the most important subsidiary of the world’ are insane!

While watching the Champions League lately, the commentator mentioned the value of the players from Paris Saint-Germain against Celtic. The total value of the French squad was around 568 million British pounds against the relatively small Scottish side, almost 22 million British pounds. The fascinating part about this mentioned fact is that I was not even surprised! Later that day I realised that this is just so controversial. Paris Saint-Germain won the match of course with their sublime attackers Cavani, Neymar and Mbappé. This made me start thinking about all the influences the rich (Middle) East could have on the pitch. By taking Manchester City for example, you can clearly see that it is possible to actually ‘buy’ a Premier League championship. After the acquisition of the Manchester City Football Club by Sheikh Mansour in 2008 the club won the league already in the 2011-2012 season. On the other hand, there are still fairy tales happening in major football leagues in Europe. In the 2015-2016 season small Leicester City FC won the Premier League without any large transfers or investments. Vfl Wolfsburg won the Bundesliga in the 2008-2009 season with only two points ahead. Bursaspor did it in Turkey a year later and FC Twente in the Netherlands as well. At the end, there still are 22 men, 5 referees, a ball and a grass pitch deciding what the outcome will be of the game.

So, fairy tales are still possible to happen in modern football these days. But if you just think about it the other way around some rich clubs are fairy tales as well. Imagine being a fan of an English football club that hasn’t achieved so much in football history and probably will never be champion again. Couldn’t it be a fairy tale if a rich Sheik buys the club, invests a lot of money in it and makes it one of the big competitors in the English Premier League? That’s exactly what happened with the Manchester City Football Club in 2008. Just a few hours after the transfer deadline the club bought one of Real Madrid’s best players Robinho. This must have been fantastic for the Man City fans and everyone involved in the club! The club was struggling in the Premier League and hadn’t won the title for more than 35 years already. Now, after only four years the club won the Premier League under Roberto Mancini’s management and was going to play Champions League regularly. Isn’t it nice that the established strong clubs are facing new competition now? And that there are more surprised going on during the English league. Not only Mancester City but also Chelsea Football Club had the same. Well-known Russian businessman Roman Abramovich bought the club in 2003 and afterwards they won the Premier League five times and one Champions League title! Now the Premier League is more divided than before which I see as a good thing. 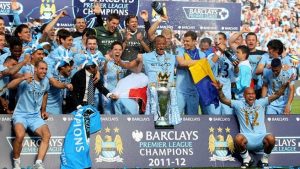 Back to Manchester City and Sheikh Mansour bin Zayed Al Nayhan. After I did some research and watching a fantastic video (link) on YouTube about Man City’s ownership, I realised that there was more behind the acquisition of the club. The acquisition can be seen more as benefits for business than only the joy of the game. To understand this, I would like to shortly explain how it all works out with the club and how it is also connected with some ‘dirtier’ business. Now, Manchester City FC is basically owned by a holding company that administers football clubs all over the world called the City Football Group. This company owns, next to Man City, the following clubs: Melbourne City FC (Australia), New York City FC (US), Girona FC (Spain), Yokohama F. Marinos (Japan) and Club Atlético Torque (Uruguay). Thus, the City Football Group company is owned by the Abu Dhabi United Group which is founded by His Royal Highness Mansour bin Zayed Al Nayhan.

According to the Human Rights Watch the purchase of all these football clubs by the City Football Group can be called ‘reputation laundering’. Buying these clubs provides the UAE Sheik(s) a tool wherewith they can advertise for companies like Etihad Airways, Etihad Holidays and so on. Just to mention: the home stadium where Man City plays is called the Etihad Stadium. It also buys you leverage with the press who needs access to ‘your’ players and your stadium, and it allows you to praise the Abu Dhabi related values and companies. This draws people’s attention away from the fact that your record on human rights is grim and worsening. 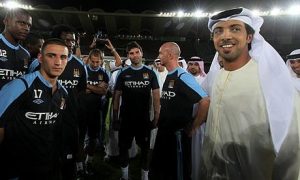 Mansour’s Abu Dhabi United Group is one of the companies that is part of the Abu Dhabi Investment Authority (ADIA). Where accidentally His Royal Highness Mansour is the chairman! The ADIA is the sovereign wealth fund of the Emirate of Abu Dhabi. But the ADIA is also connected to the investments and (partly) responsible for all the massive buildings and skyscrapers that have been built in the United Arab Emirates. These buildings were built by Asian migrant workers who are treated like slaves (link) and live under the worst conditions. 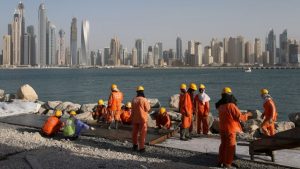 NBA Has the Solution?

So finally, I thought that it was a good thing that a rich guy invested in ‘small’ football clubs because then it could be possible for them to compete against the ‘big’ clubs. Moreover, in Manchester City’s case, the whole football academy has been rebuilt, eastern parts of Manchester have been built and the Etihad Stadium of course. But on the other hand, maybe then the football competitions would be very easy: the owner who spends the most will win the title. Luckily there are institutions like UEFA and FIFA that are putting sanctions on clubs who cheat. Unfortunately, the owners are still clever enough to find ways to dodge the rules and regulations on Financial Fair Play.

If we really want to stop this money madness in football and indirectly encouraging the dirty businesses of the rich, I believe that we have to take a look at what happens in NBA. The NBA uses a system which is based on salary limitations. Basically, every team has a maximum amount that may be spent on wages. This creates more equality between clubs to keep the competition fair amongst each other. Think it over, how it would look like if we implement such a system next season in every European football competition…