China is planning to implement a social credit system in the year 2020. This is a plan of the Chinese government to develop a reputation system for the Chinese citizens and Chinese companies. This system is there to assign a so called “social credit” based on data that the government requires, both economic data and social data.

This all might sounds pretty familiar to you, and that might be possible.  On the 21st of October in 2016 Netflix aired the episode “Nosedive” of the popular Black Mirror series. For the ones who do not know black mirror; black mirror is a series that takes place in the future where there are all new (not currently present in today’s world) technological innovations. Every episode shows the negative side of those innovations, and this episode in particular shows how bad this idea (of a social credit system) is to implement a social rating system. 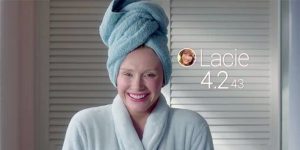 In 2010 the local government of Jiangsu (Where? Right, province just north of Shanghai) tried a smaller local variant of this system. This local Government rewarded people with points if they showed good behaviour (think of performing a local honour to the community). However, the local government also deducted points for “Bad behaviour” such as traffic offences. The project however was a failure. 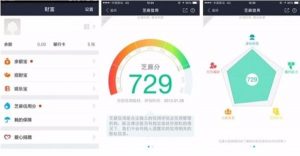 The idea of a social credit system came from the Central Leading Group for Comprehensively Deepening Reforms. This group is set up by the communist party of China, and is focussed on setting up new policy guidelines for reforming the economic, political, cultural, social and ethical systems. This all to make sure the President of china (Xi Jinping) is able to control both the economy  and the citizens.

The social credit system will rate on four different areas;

So how exactly will this social credit rating system influence the Chinese Individual and the Chinese companies?

If thrust is broken in one place, restrictions are imposed everywhere”.

The Chinese citizens are going to be really dependable on their score (just as in the Black Mirror episode). This score is about your “ultimate truth”. Your social credit system will determine if you will be able to borrow money, get your children in a good school or travel out of china. A document  is produced by the law and policy makers of media in china where all possible sanctions are listed when achieving a bad score. The overall idea of this document is “If thrust is broken in one place, restrictions are imposed everywhere”.

This is (To me as a western man) a scary thought. How will this influence the businesses of china however?

The plans for this idea are as follow: this credit system will not generate a single score for every company, but the government plans to insert a decentralized market because of these social ratings. These ratings are also the same as the four mentioned above, so these are both for the Chinese individuals AND for the Chinese companies.

The decentralised part of this new system is that companies will be rated by focussing on major offenses, sectorial social credit ratings, commercial credit rating services and the bank of china. However there are still technical problems to overcome to be able to put up this system. 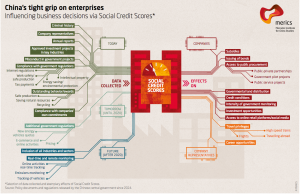 The plan of the Chinese government is to move to more open markets where less state interventions are necessary. This goes hand in hand with the social credit system. When a company obtains a low (or bad) social credit score, it will move down on an investment list that will make it less interesting for foreign investors. Because of this system the Chinese government needs to intervene less in these companies.

On the other hand, this system really shows again how the Chinese (communistic) government wants to use this system to obtain overall power. This credit system will make it harder for companies that are not in line with the Chinese government to get investments or better opportunities on the Chinese market.

Foreign investors that want to take their company to the Chinese market, are all automatically in this credit system too. If they like it or not, there is no choice when you want to operate in China. However, since the companies are still foreign companies, they will not be just as dependable on their score than domestic companies. This might be so, because they will probably have no (not many) ties with the Chinese banks, that influence the social credit score.

So now we know the implications of this system that is (according to the Chinese government) going to be implemented in 2020. Is this, obviously highly difficult project, able to be put to work in this year? Right now this social credit system is facing two obstacles still; bureaucratic and technological.

The technological problem is about establishing a platform that is able to handle this immense amount of data of both companies and citizens. Since 2015 there is some sort of platform online which is collecting data from local governments. In the three years that this platform is running a lot of data about companies is collected already. 80% of the data   contains integrated data about information of Chinese companies. This data is mostly provided by the Ministry of Industry and information technology.

However this data is mostly reliable on paper based sources or face to face information. This shows that to set up this social credit system still needs a lot of work to be done at the technological side of the platform.

In the end to me the idea of the Chinese government to set up a sustainable economy that is controlled by the government is understandable to me. This new system that companies use follow the rules so strictly that it makes a more fair market in my opinion. Also if China would like to tackle environmental and social challenges this tool might me a really good solution what in my opinion might work. 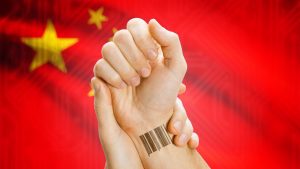 In the end I feel bad for the Chinese citizens. For me this is a tool to suppress the Chinese population. I hope that the system will never put to use in the rest of the world. Only time will tell us how this is going to play out.