Throughout history, many events have influenced our cultural heritage, bringing it to be what it is today.
Despite having undergone the consequences of major factors such as wars, colonization or industrialization, some indigenous communities and ethnic minorities have managed to preserve their identity, transmitting to subsequent generations what can be defined as the latest evidence of a world almost blurred by globalization.
As some groups have survived, others have become extinct…
Today, the unique cultures of minority and indigenous peoples are under threat and struggle for an uncertain future. Through our actions, we can all be ambassadors of a peaceful, honest and respectful coexistence between different cultures!

Some of the World’s Remotest Tribes

All these photos are collected in a book created by Jimmy Nelson, to then be transformed into a film (here the introduction). An interesting journey among the world’s remotest tribes, in order to capture them beauty before they disappear.

The hunger for conquests

Since ancient times, small ethnic groups gathered, proclaiming their authority over the territories, thus forming centres of power defined by borders, so-called states or nations.
The colonization, described as “the expansion of a nation on territories and peoples outside its borders with the aim of obtaining economic benefit by exploiting the resources, labor and trade of the latter”, had a significant period during the great geographical exploration of the 15th and 16th centuries, which gave rise to a new concept of colonization (mainly attributed to the expansion of European states).
Imperialism, economic development and population growth contributed to the colonization of Europe in the rest of the world.
In the era of the great conquistadores, the preservation and protection of minority and indigenous cultures still did not form part of the concerns of humanity at the time…
When we think about the destruction of a people, the mind of many of us immediately catapults to the war crimes committed by the Nazis against Jewish and other peoples, but we must not forget many other terrifying events that have happened in the past and are still running today.
Colonisation, supported by the conquering thought of absolute superiority, led to great atrocities, depriving entire populations of their liberty, such as the Native Americans or the African peoples.

What is the situation today?

Since today, many indigenous and ethnic groups has been extinct. Many form of discrimination against traditions, language, music and religions are still present nowadays. But, why are there still so many indigenous peoples who struggle to keep their culture intact?
We have to consider that these peoples are often isolated, lacking of governmental structures that represent them and means of communication through which they cannot spread their voice to the rest of the world. Moreover, integration policies promoted by states and differential exclusion also play an important role.
In Europe and the United States an increase in hate crimes has been reported against minority communities. While in Asia, some governments support an homogeneous national identity that force indigenous peoples and ethnical minorities to suppress their customs and believe, in the name of “progress”.
Furthermore, the globalization leads to the continuous necessity of raw materials and to the development of tourism, which causes an invasion of the housing areas of these communities, generating destructive effects such as displacement, depression, alcoholism and diseases. 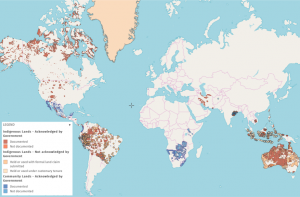 LandMark is the first global platform that provides maps of the boundaries of indigenous and community lands around the world, as well as information on the percentages of land held and used by communities and the security of their land rights

International actions of protection against indigenous peoples have followed a very slow process, started in 1982 until September 2007, when finally the General Assembly of United Nations adopted the Declatarion on the Rights of Indigenous Peoples. (UNESCO, Minority rights.) 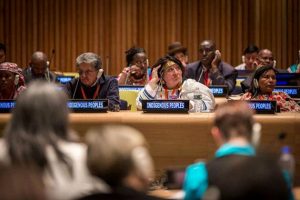 More than 1,000 indigenous leaders and a delegation from the Inuit Circumpolar Council, sat down with governments to discuss the implementation of the UN Declaration on the Rights of Indigenous Peoples.

Although there are several laws protecting these peoples, the current situation is not reassuring at all, and we are already talking about an indigenous crisis. In fact, in 2014 the first World Conference on Indigenous Peoples took place to discuss the pursuit of the objectives described in the declaration and to improve the application of protection measures in other countries.
According to the United Nations Regional Information Center, currently only 22 countries have validated the principles of the convention, and many governments did not adopted any measures yet.
In a interview, Raffaella Milandri, a writer and human rights activist, said

I consider it essential to evaluate the relevance of the European Parliament, to apply a monitoring of the commercial, social, cultural and environmental impact of European companies operating in areas inhabited by indigenous peoples (and I mention, for example, the parliamentary question of June 21, 2011 Colombia-EU) Also very important is the monitoring of the tourist impact caused by European flows in areas inhabited by indigenous peoples, sometimes extremely harmful at cultural level without bringing economic benefits to the populations but only to tour operators who exploit unscrupulous local folklore.

I would like to use Raffaellas’ statement as an opportunity to introduce an important influencing factor of the current and future situation of indigenous peoples, that is tourism.
As one of the major driving forces of the world economic growth, tourism plays a crucial role in the fate of indigenous peoples. If the involved stakeholders are able to manage the tourist activities in a responsible way, the indigenous peoples can derive various advantages that improve their living conditions. On the other hand, unsustainable actions can have harmful consequences on the social and economic aspect. Many international organisations, such as WINTA,  Survival International, UNWTO and UNESCO, are working to manage these challenges on a global level.

The meeting of “the modern world” and “the past world”: Tribal Tourism

The expectations of today’s tourists are becoming ever higher, pushing tourism agencies to focus more on the emotions and authenticity of them products. In response to this change, a recent trend called “tribal tourism” or “ethno-tourism”, in which tourists visit these mysterious peoples, is gaining more and more popularity.
As I have already mentioned, tourism can be a good way thanks to which both travellers and indigenous peoples (willing to create contact with other cultures) benefit, but all this entails challenges, which if lost can turn the situation into a complete disaster. Here I would like to show you a couple of sad examples of threatened indigenous peoples that have occurred due to ignorant tourists and irresponsible tourism companies:

INUIT – Canadian Artic
Inuit are the indigenous peoples of the Arctic and most live among 53 communities in Canada. According to the Canadian government statistics, the population is currently counting 64,200. In 2016, one of the biggest cruise companies, the Crystal Serenity, began making stops in small villages in northern Canada and then headed to the Northwest Pass, letting hundreds of passengers break the Inuit’s serenity.
While the increase in passengers is almost duplicated, criticism is not lacking. The Inuit community is in danger, not to mention the damage to the Arctic ecosystem.
For more information, click here & here.

This is extinction tourism,” said international law expert Professor Michael Byers, of the University of British Columbia. “Making this trip has only become possible because carbon emissions have so warmed the atmosphere that Arctic sea ice in summer is disappearing. The terrible irony is that this ship – which even has a helicopter for sightseeing and a huge staff-to-passenger ratio – has an enormous carbon footprint that is only going to make things even worse in the Arctic.

This point was backed by Okalik Eegeesiak, chair of the Inuit Circumpolar Council. “Far too many people will be descending suddenly into these communities and bringing far too much garbage with them,” she told the Observer.

Kublu, the Pond Inlet councillor, told the Nunavut Planning Commission. “We have stressed that cruise ships be restricted, but there is no response from anybody. They come and go as they please. This is regrettable and unfortunate. We have no voice.”

JARAWA PEOPLE – Andaman Islands
Today Jawara population counts only 400 members. The case of the Jawara population is full of sad facts that happened because of human contact. Human safaris and the continued intrusion of tourists and the local population in the Jawara territories have led to alcoholism, epidemics, and abuses that have reduced the population by nearly 70% in the last 10 years.
Watch also this.

The outsiders are bad men. They abuse us. I prefer to stay in the jungle.

THEREFORE, based on these facts and other research data, I believe that any form of contact from guided tours, hotels, travel agencies or any tourist organisation, should be stopped immediately. We have tried to handle such situations many times in the past, and we must admit it, the tourism industry is simply unable to manage its fast development with preservation. Obviously, nothing has a zero impact, and sooner or later, we have to face the reality of the facts. A detailed plan of integration and preservation is needed together with the international collaboration of States, Businesses and the Population!

Let’s try to think long-term. Do we really believe that these peoples are still alive in the next 100 years.
Think about it, to what extent has the industry acted in the long term? So far, countermeasures taken by the industry that have worked are very few. We talk about “We are controlling our tourists”, “We are doing everything possible”, “Do not worry, we have the situation under control”. Yet, we do not need a degree to understand how things are going.
The influence of tourism stakeholders leads these people not only to be damaged from within but also externally, when they are hired or forced to perform in shows, take part in a tour attraction or dress tourists with their clothes…

Traveling is fantastic! We share different cultures and we learn from each other.
Well, probably this is what you think, but is not really like that…
Do you know what the difference is? Today’s’ tourists arrive … take … take away and leaving, without sharing anything.
Since the introduction of technology, we do not wanted to interact anymore. If we are really looking for more authentic experiences, why is our behavior so superficial?
In the past, when we were still travelling by looking at the stars, the world was so big, but we were so connected.

Having said this, I want to share with you perhaps the most important statement that concerns you: we must not forget that tourism unites all of us and that therefore we are able to contribute!.

Which traveller are you?

For more about this issue, please visit National Geographic Blog.