During my minor in International Relations, the developed countries always seem to have the most influence on International Law level. Why are these developed countries developed? Why are these developing countries not at the United Nations table as permanent members? Almost all the permanent members are western, they are deciding what happens in developing countries but the developing countries themselves have no influence. How come? These are the questions I had in the back of my head when I wanted to start writing this blog. Also, one blame that always comes forward when I am asking this question is “colonization”. Did colonization really have that much of an impact on these developing (former colonies) countries? That is what I want to find out.
The headlines are chosen from various Kanye West lyrics. Kanye produces music which is about the results of colonization, but also about progression.

Dirt and grime and filth inside
Colonization is often associated with slavery. This is for sure one of the most gruesome acts that come to mind when one thinks about the colonization period. One association however one could also come up with, is the fact that old colonies are now prospering because of their former colonization. I will talk more about this prosperity of colonization further on. When reading this blogpost, one should keep the following in mind. I am writing from a Western perspective. I personally am not affected in any way by former colonization. My family however has suffered from former colonization attempts and wars in the Netherlands. I am merely trying to also change one’s perspective on the definition of colonization and why the world is now as we believe it is.
This comes from my fascination of why the developing countries always lack behind when it comes to technology, hygiene, governmental control and science. For example when one googles South-African scientists, only white people are shown. Is this coincidence or is this saying something about the history of South-Africa? This is what I am trying to figure out. Also the economy and the influence of these developing countries when it comes to International Law is something which will be discussed later in this blog.
The definition of colonization is “the action or process of settling among and establishing control over the indigenous people of an area” according to the dictionary of Google. Wikipedia says the same in different words: “a process by which a central system of power dominates the surrounding land an its components”. The definition implies nothing when it comes to resource exploiting or slavery. This definition of colonization in biology is “settling of organisms in an empty or low populated area non-native to the origin of these organisms”. These organisms settle themselves in an area in which they have little to no competition. So according to the definitions even an invasion, for example second world war, is a colonization. The Netherlands were occupied by Germany, Germans settled in The Netherlands and the central system of power, Berlin/Germany, was dominating the surrounding land and its components. It might seem that the definition does not do justice to what happened during the colonization which happened during the “golden century” of The Netherlands, considering slavery and other gruesome acts, because colonization is always considered as a bad phenomenon. Also the term development is taken from a western perspective. What I believe development is, is a thriving economy, stable government and social security.

If I knew what I knew in the past

What happened in previous colonies if always associated with the term colonization. Gruesome acts in South-Africa leading to apartheid, mass murders in Indo-China, slavery in Middle-Africa and suppression of the native population. The question which popped up immediately for me was “Why was the west the first to conquer and colonize other countries and why did for example South-Africa not invade Europe? We all know that civilization started in the middle-east/north Africa. Egypt and Mesopotamia were one of the most influential and developed countries, this was a couple of 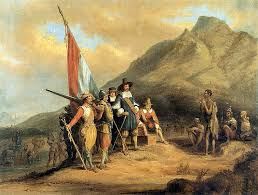 thousands years after the spawn of humanity (Homo sapiens, according to Wikipedia). In the area of Egypt, the agriculture was lacking and not able to provide enough food for an army which could invade other big areas north of them. During the roman period, the romans copied the development and technology of Egypt which created a massive grow spurt for Europe. What fascinates me is that south of Egypt no countries copied the Egypt culture and their agriculture industry. All the neighboring countries just had to copy irrigation systems in order to help them to develop their own countries. Once a country/culture has enough food to provide for their inhabitants, the people will start to think about other things like technology and will start to develop their culture and people. The Islamic Empire even was very well developed after the Roman period but did not bother to look past the south of the Sahara.

You see it’s leaders and it’s followers
What happened next is very interesting. Because West-Europe was developed after the Roman Empire Era, they started to look past their borders. In 1487, a Portuguese ship discovered South-Africa. In 1652, a Dutch ship arrived in South-Africa in order to resupply and discover a new land. They brought European goods and established a trading station. In 1652, South-Africa was a couple hundred years behind in (western perspective) development, so they could copy (like the Romans did from Egypt) the Europeans. So from 1487 to 1652, the south of Africa did not copy nor learn from the European discoverers and just stood by and watched them. This is where that generation messed up. They were behind when it comes to Western development and technology in for example military power and were not able to provide enough, I repeat, enough resistance to not be colonized. Because they were not the same and different in their governmental state, the Europeans saw them as “dumb(er)” people. Not being able to look North in those 200 years, not being able to develop themselves, not using their resources right, the Europeans did that hundreds of years earlier already, sometimes even with less resources (Russia). Even the Egyptians used their resources right before the Europeans did that. When it comes to looking at Asia, it was at that time way more difficult to just copy Asia. The Europeans were around for decades and the Asians were not yet to be seen anywhere.
So the South of Africa and the rest of Africa were not able to develop themselves accordingly to the western development. This could hypothetically mean that if there was no contact made with Africa, they still could be hundreds of years behind when it comes to development of their economy and social security. I do not want to say “thanks to”, but because of the contact made with the Europeans their civilization is now closer to an European level than they could ever imagine. They did not copy the Europeans, no, the Europeans put their culture and development in that country in order to create economy and social security to some extent.

Every other continent however did recover. How come?

What happened after unfortunately is the slavery of the lesser developed people (compared to the Europeans). This is still the case in other parts of the world. Bangladesh, Cambodia and many other countries have child labor. This is basically the same as slavery introduced by the Europeans. The lesser developed people (uneducated kids in this case) are being exploited by the well-developed countries. As of today, Western countries are still trying to develop and educate these lesser-developed countries in order to get rid of these violations of human rights. My teacher from Zimbabwe and a Zimbabwean student at my school even say they do not want the development or money from the west, they want to do it themselves. Can they do it though? They have had the opportunity to copy the government style, or democracy even, but never even tried to copy it as history shows us. Almost every country in the world as been influenced or controlled by Europe. There are countries with a thriving economy, but still Africa, the country with the most amount of natural resources is not able to recover… 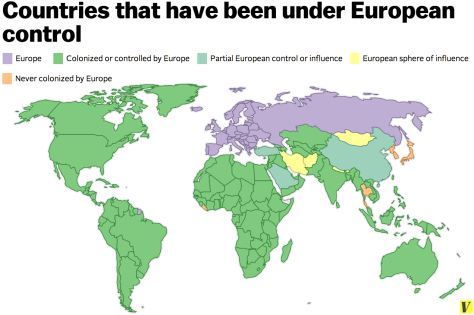 We all go
What is interesting to see, is that the European countries have been colonized themselves. If I look from a Dutch perspective; we have been colonized from 1384 to 1482 by the French, the Spaniards (1556 to 1715) and the Germans (1940-1945). We always recovered. Even 70 years later, our economy is thriving and we have never been as well as before. South-Africa however, if we take that country as an example, have been independent since 1961 and have not completely recovered because of their underdevelopment over the years. Indonesia also has not completely recovered, they were independent in 1945. What stands out is that even though there was colonization, the Western countries always recovered. How come? I do not know.
India, a former colony of the Brits, is independent since 1947 and they have a thriving economy. They are growing when it comes to influence on the world and also on International Law level. Still there are violations of Human Rights in India. I think that India would fir 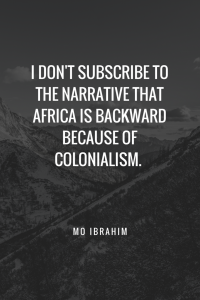 st like to focus on their economy, because when the economy is thriving, the government has a higher income which it could spend on social security for example. Therefore is India one of the countries outside of the west that are thriving after colonization, just like the west. They are still, especially when it comes to human rights violations, behind the west. They are however on the right track.

But hey, admittin’ is the first step
What can we do as individuals to help these developing countries? I believe that the International Law could be changed, if these developing countries even want help in the first place. Some countries do not even want the help of the western/Asian countries and want to try to develop their country on their own. What could be a solution however is that The United Nations could add more countries to the permanent council based on their development. Development could be measured in economical strength, governmental stability and respect for human rights. However, I argue that colonization did not have such an impact as the victim-role-countries make it seem. Almost every country in the world has seen some form of colonization and still Africa is the only one complaining while they have the highest amount of natural resources?

Maybe they should get over it. Just like the rest of the world did.